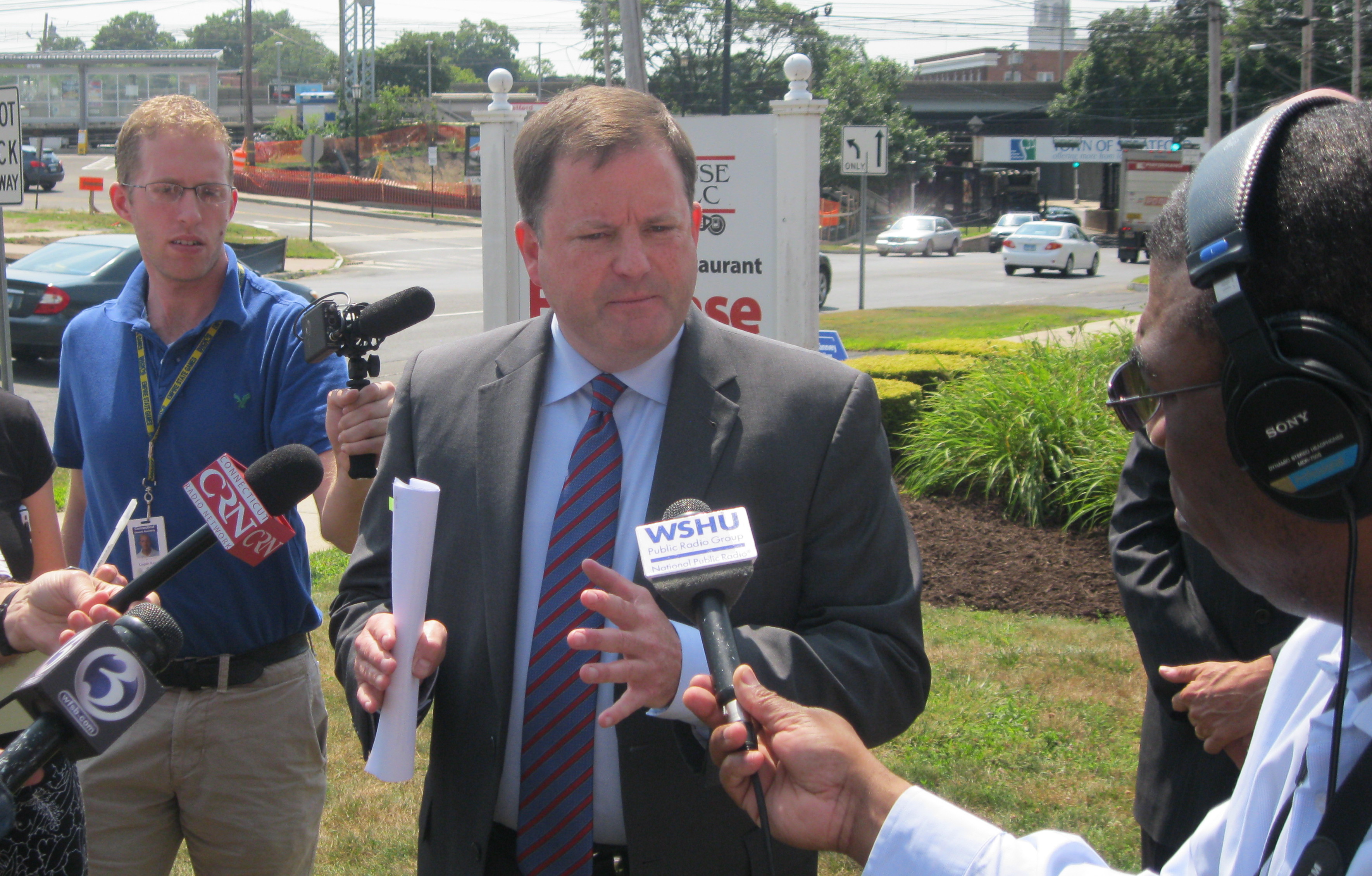 Republican gubernatorial contender John P. McKinney unveiled a plan Thursday to exempt all households earning less than $75,000 per year from the state income tax starting in 2017.

The proposal hinges on several controversial elements,  including repeal of a tax credit that saves working poor families almost $120 million per year.

The plan, which McKinney and running mate David Walker presented outside  a Stratford shopping center, also relies on the questionable assumption that state government can get by next year on the same funding it spent in 2011. The two Republicans promised to provide middle class income tax relief in a new commercial released on Tuesday.

“We believe middle-class people across Connecticut have paid too much in taxes,” said McKinney, the state Senate’s minority leader. “It is time to be honest. It is time to be real.”

Helping those hurt most by 2011 tax increases

McKinney noted that Gov. Dannel Malloy signed more than $1.8 billion in new taxes into law in 2011 — a move done to help close a record-setting $3.7 billion shortfall left behind by Gov. M. Jodi Rell and the 2010 General Assembly.

Still, McKinney and Walker said that resulted not only in an income tax hike, but also in increased sales, and business taxes – all of which have slammed Connecticut’s middle class.

“The financial condition of this state is much worse than advertised, said Walker, a former U.S. comptroller.

The McKinney-Walker team estimates more than one million households would be spared from filing tax returns under the proposal. But only about 60 percent of them would benefit in terms of dollars and cents – and others would lose money.

Most Connecticut households earning less than $35,000 already pay no state income taxes. That’s because of a series of personal exemptions built into the state tax code along with a popular credit that reimburses households for up to $300 in local property tax payments.

To help pay for the plan, McKinney and Walker proposed eliminating the state Earned Income Tax Credit (EITC), which was enacted in 2011.

When asked why, McKinney said “we’re trying to provide income tax relief for people who are paying income taxes.”

The proposal drew a sharp rebuke from the Connecticut Democratic Party.

“Providing tax relief to hard working, Connecticut families is important, but not at the expense of our schools, our roads and infrastructure, and elimination of other vital services,” party spokesman Devon Puglia said. “John McKinney has proposed slashing the Earned Income Tax Credit for low income residents, rental rebates for seniors, gutting money for schools, pulling the plug on health care, and laying off droves of employees. Under his latest plan, the cuts would be even deeper.”

Paying for the tax cut: A work in progress

Eliminating the EITC isn’t the only controversial component of McKinney and Walker’s plan to pay for the income tax break, which would cost the state $700 million to $750 million per year.

That potential loss of revenue, coupled with the $1.4 billion deficit in the next budget,  means the Republicans need to find $2.1 billion to $2.2 billion in offsetting budget-balancing moves.

But McKinney only laid out a package of cuts worth a little less than $800 million. Besides scrapping the EITC program to save $120 million, the others include:

–Removing all inflationary increases assumed for the 2015-16 budget, including for the Medicaid program, to save about $310 million.

— Canceling any statutorily required increases in municipal aid to save another $200 million. (McKinney notes that these are increases that the legislature consistently has waived year after year.)

— Slashing mid-level management across all state agencies to save $120 million.

Two big wild cards in the McKinney-Walker plan involve calling for the third round of state employee concessions since 2009 as well as gradually privatizing more social service and health care programs.

“The truth is, nobody has represented the taxpayers at the bargaining table in this state in 30 years,” Walker said.

The goal of all of these steps, combined, is to effectively bring state spending back to 2011 levels — and then add only those spending increases mandated by contract or law.

To those who point to soft numbers in his plan, McKinney’s responded with a challenge.

“Where is their plan?” he asked, adding that too many politicians have refused to consider major income tax relief since the tax was enacted in 1991. “For too long, leaders have said we can’t do it,” he said.

Foley, who held a wide lead over McKinney in an early May poll by Quinnipiac University, has said he would cut one-half of 1 percentage point off of the state’s 6.35 percent sales tax and eliminate a $250 biennial levy on small businesses. But he also has offered very few specifics on how he would finance those tax cuts, or on how he would close the budget deficit.

If Foley did produce a plan for tax relief, “it would look like this,” McKinney said, holding aloft a blank piece of paper, “because he has no plan.”

“Tom Foley has been talking about reducing taxes for a long time,” Foley spokesman Chris Cooper said.  “John McKinney is coming to the party very late.  Tom Foley will provide broader-based tax relief than John McKinney is proposing, including reducing the sales tax which benefits all Connecticut residents.