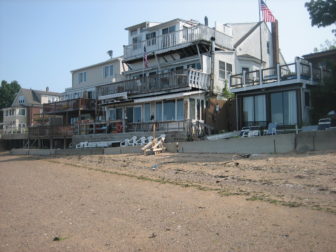 Morris Cove in New Haven has been approved for nearly $2 million in federal funding to build a seawall where temporary Jersey barriers protect three houses now and for another seven houses beyond that.

New Haven – Nearly two years after storm Sandy sacked the Connecticut coast — a shoreline still disheveled from a pounding by Tropical Storm Irene a year earlier –federal funds for recovery are still being parceled out.

The application deadline for a second allotment of Community Development Block Grant funds through the federal Department of Housing and Urban Development is two weeks way. It was only July 1 that the last recipients for the first round were announced.

More than two-thirds of the nearly $32 million in the July award went to three housing projects in Norwalk, Stamford and Bridgeport. The rest was split among shoreline infrastructure, planning and facilities proposals. (The full first round was nearly $72 million.)

But at least a couple of the awards raise some questions about how the money is being spent and whether it ever will be used.

For example, a longstanding and controversial request to build a seawall along Morris Cove in New Haven, approved as infrastructure funding, could be years away from implementation. The project faces serious hurdles that could make meeting grant-imposed deadlines a race with the clock.

Morris Cove is one of the most high-profile projects in the group. Officially known as the East Shore Erosion Control Project because of its location along the east shore of New Haven Harbor, it will receive nearly $2 million — half awarded in the July announcement and the other half already okayed from the next funding block of $66 million.  Some $30 million of the second-round of funding will go toward infrastructure, while the first round only allotted $4 million out of requests for funding totaling $18 million.

The Morris Cove funding comes more than a decade after residents began asking for a seawall – long before Irene or Sandy hit.

Among them is David Kronberg, a 46-year resident whose home still sports the remnants of a destroyed deck and other damage – all largely the way Sandy left it two years ago. 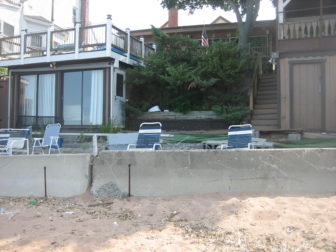 A low jersey barrier installed temporarily by the Department of Energy and Environmental Protection about a year-and-a-half ago is already showing signs of damage. Waves that reach it during high tides have also piled sand behind the barrier to within inches of the top.

“If we get a northwest wind it’ll come over,” Kronberg said of the water.  He was speaking on a still, sunny morning that gave no indication of being smack in the middle of hurricane season.

About a dozen homes north of Kronberg’s have built illegal walls and bulkheads to connect to a legal wall built along Nathan Hale Park in the early 1980s. Those homes have no beach left. Even at low tide, the water now laps at their walls, unlike years ago when Kronberg said he used to be able to walk all the way up to the park.

“Pretty much at low tide you could,” he said.

Coastal geologists generally do not favor seawalls, citing them for such beach loss when waves have nowhere to deposit sand that they naturally move. The geologists also blame seawalls for increased erosion due to amplification of wave energy by the hardened structure. Concerns like these stalled out the most serious proposal for a seawall along Morris Cove offered in 2000. The idea was finally abandoned in 2006 when the then Department of Environmental Protection would not approve it.

The new proposal is for a 500-foot long, 10-foot high steel sheet seawall to be built behind 10 homes on Townsend Ave., where these Morris Cove homes officially are. The wall would run from Kronberg’s house north with most of the wall replacing the illegal ones.

But several homes south of Kronberg’s would remain unprotected and there’s no telling what that will mean as federal and state agencies begin their review and potential revision of the proposal – a process that could take years against a completion deadline of March 19, 2019.

“There’s too many questions between here and there,” said Joe Krupa, the municipal civil engineer in New Haven overseeing the project. He said he couldn’t begin to estimate the timing, even though the application required estimates. “There are a lot of open-ended questions with this project yet.”

There are concerns about what would happen to water during storm surges with a wall in the way. Generally that water heads for dunes between homes and can potentially flood onto Townsend Ave., which along with a large area that stretches all the way to Tweed Airport, is low-lying. This is a key reason the city has viewed the seawall as a necessary community project even though it would be on private property. Block grant requirements are that projects have a public benefit.

And then there’s the engineering: how to anchor the seawall it into sand; what engineers will find once they start digging; and literally how to coordinate it.

“The tide already comes up three feet on the [existing] wall,” said Krupa. “Either we have to come in by barge and work only during high tide, or come in on land and can only work a few hours.”

But the clock will start ticking long before any digging begins. The Army Corps of Engineers signoff is first in line, and nothing starts without them. The Corps recently revived the review it began, but never completed, of the aborted 2000 proposal. A letter outlining what needs to be done as part of a feasibility study was sent to New Haven last week.

That study, once it starts, generally takes 12 to 18 months, said Michael Riccio, the Corps project manager. Aside from all the environmental consequences from the impact on fish habitat to sand migration and erosion, the Corps needs to be clear that a public benefit is served and that the problems the project is solving were caused by Sandy – since that’s what the funding source is for. Several alternatives need to be considered. And the financial rules of who pays for what have to be met.

But it’s still possible the Corps could determine the project is not feasible.

“That is possible,” Riccio said. “It’s one of the key things we want to work out with the city early on in the process.”

Assuming Army Corps signs off, DEEP still needs to approve the project. No fan of seawalls, the department has been disinclined to approve new ones, though Morris Cove falls into a category of new walls that are permitted because they protect occupied structures built before 1980.

“Conceptually we’re OK with that. It looked like something we could possibly approve,” said Brian Thompson, DEEP’s director of the Office of Long Island Sound Programs of New Haven’s new proposal. “Effectively the area is already hardened. It may not be continuous, but it’s close to the entire area.”

That was good news to Kronberg. “I think what happened is they realized there’s a potential disaster problem sitting here just waiting to hit,” he said. “If the dune does get compromised, God only knows how much damage it’s going to do on Townsend Ave. and how deep the water will get.

And then it would have to be built. Were the project to be extremely delayed or scuttled, the funds can be reallocated up to a point. Otherwise it’s a use it or lose it situation.

“It would be a shame for us to give back any funds to the federal government,” said Mia Delaire, the project manager for CDBG disaster recovery programs as part of the state Department of Housing.

Timing is not the issue with the $415,000 planning grant awarded to Shoreline Shellfish, LLC, a private enterprise founded by Daniel Snyder, a neuroscientist formerly affiliated with Yale who now focuses on marine biology.

His proposal is to design, fabricate and test equipment and an underwater process for removing decayed material known as sapropel, inserting it into huge geotextile tubes. The tubes, made of special high strength fabrics, hold in sediment or other substances. They are often used for shoreline stabilization and other marine purposes.

The two black tubes used to re-establish this dune are made of geotextiles.

While Snyder would like to see sapropel-filled tubes used to create bases for oyster reefs that serve as shoreline resiliency barriers, his proposal will not build them. In fact it’s not clear the process he wants to test will actually work.

That opens questions about whether the proposal meets the guidelines for a CDBG grant, since a public benefit is not guaranteed.

“The application submitted to us was clearly one for a planning activity associated with potential resiliency for the Connecticut shoreline,” said Mike Santoro, the community development specialist with the state Department of Housing. He said the committee evaluating the proposal felt it met the definition of urgent need under CDBG parameters – even though no mitigation reef will be built.

“We felt the project deserved to receive a planning grant.”