As GOP primary winds down, Malloy pushes for debates 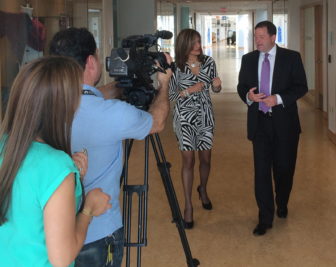 John P. McKinney greeted Metro-North riders at dawn Tuesday, then spoke to evening commuters on WTIC-AM. Tom Foley had no public events, another sign he is looking past next week’s Republican primary to a fall rematch with a restive Gov. Dannel P. Malloy.

Malloy, a first-term Democrat whose re-election is rated as a toss-up by political handicappers, campaigned at a prosperous high-tech factory, where he told reporters he was ready to defend his record in multiple debates as soon as a GOP nominee is crowned.

“Usually, an incumbent looks not to have a whole lot of debates,” Malloy said. “I am prepared to have a number of debates and discussions throughout the state. In fact, whichever Republican wins, I look forward to having a thorough discussion of the issues in a debate format, final number to be decided. But I’m going to be accepting a lot of invitations.”

In a telephone interview Tuesday night, Foley said he was eager to debate Malloy, even though he has limited himself to two televised debates with McKinney, the last of which is scheduled for 8 a.m. Sunday on WTNH, Channel 8, a time when television audiences are tiny.

“The more the merrier,” Foley said, responding to Malloy’s call for multiple debates. “I don’t think the governor distinguished himself the last time around. Once the debates started, I think I gained about two points a week.”

Malloy defeated Foley by half a percentage point in 2010, Connecticut’s closest race for governor in 56 years.

This summer’s fight for the GOP nomination has been relatively listless, a strategic goal of the endorsed candidate. Foley has largely refused to engage McKinney since winning the endorsement of the Republican convention in May, denying the lesser-known McKinney the free fuel of publicity.

“I am surprised. I wish there were more engagement,” McKinney said after a stop in Hartford, where he was interviewed by the Spanish-language network, Univision. “The ability to have forums, debates — even be at public events together is not something I can control, other than my own schedule. I’ve been willing to have more forums and debates. He is not.”

Foley, 62, of Greenwich, a businessman and former U.S. ambassador, is finishing the primary race as he began it, with the assumption he is the frontrunner for the same nomination he won four years ago in a three-way primary as a first-time candidate. McKinney, 50, of Fairfield, a state senator for 16 years and the GOP Senate leader for seven, is seeking statewide office for the first time.

McKinney’s campaign schedule is distributed daily to reporters. Foley is accessible to reporters in interviews and, occasionally, at public events, but he sees no need to make his daily schedule known, not even in the primary’s final week.

“John McKinney is an underdog here. He needs the media, the earned media. That probably makes sense for him,” Foley said.

Foley said he has a full schedule, even if the events generally are not public.

McKinney said Foley is making a mistake by not having a higher public profile. He said Foley has been too cautious. 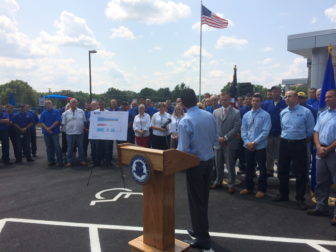 The employees of TOMZ form a backdrop for Gov. Dannel P. Malloy.

McKinney and Malloy have worked at common purpose in recent weeks, trying to establish Foley as a candidate quick to criticize men with public records, yet unwilling to take stands on matters of controversy, most notably the post-Newtown gun control law.

In interviews and during his first televised debate with McKinney, which seen by a modest Sunday morning audience on FoxCT, Foley criticizes the gun law in general terms, yet refuses to state a position on the law’s most controversial elements: a ban on the retail sale of large-capacity ammo magazines and military-style semiautomatic firearms like the AR-15.

In public comments and in his advertising, Malloy is drawing that contrast with Foley.

Malloy aired his second television commercial this week in which he was praised for his leadership on the issue by the mother of a 6-year-old boy killed in the mass shooting at the Sandy Hook Elementary School in Newtown.

“We’re going to be getting our message out from now until Election Day,” Malloy said of his decision to begin advertising during the GOP primary season. “We have a great story to tell about the choice that has to be made in the not too distant future. And we will be very specific.”

Foley said he is comfortable with his strategy of focusing on Connecticut’s weak economy, for which he blames Malloy’s fiscal policies.

Outside the plant, Foley criticized Malloy for propping up companies with state aid, yet he refused to say if he would have denied the company the low-interest loan Fusion obtained from the state.

Malloy is not backing away from his economic-development policies. He campaigned Tuesday at TOMZ, a precision manufacturing company in Berlin that is growing with state assistance: A $711,553 loan to acquire new machinery and help establish a training area. TOMZ plans to add 30 employees to its workforce of 123.

Foley said the tenor and tone of his summer primary campaign does not reflect how he will campaign against Malloy. In fact, Foley says he is smartly husbanding resources for that fight.

“Right now, we are focused on winning in November,” Foley said. “We know we have to win the primary to be able to win in November. We are certainly taking it seriously. But we aren’t allocating any more resources in the primary than we absolutely have to.”