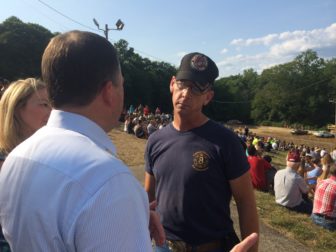 Lebanon – On a crowded hillside overlooking the demolition derby at the Lebanon Country Fair, not far from the Ferris wheel and kettle-corn hawkers, John P. McKinney worked Sunday to win the vote of a no-nonsense trucker, ex-Marine and Second Amendment defender named Wayne Lanham.

It was Lanham who approached McKinney, bursting with questions about the Republican gubernatorial candidate’s thoughts and voting record on welfare, taxes, the economy, jobless veterans and, of course, the issue thought to be most troublesome for McKinney’s campaign in rural eastern Connecticut – gun control.

His rival for the nomination, Tom Foley, had arrived 20 minutes earlier, escorted by T. Allan Palmer, chairman of the local Republican Party, whose booth offered fairgoers a choice of clam fritters, NRA buttons, and bumper stickers that warned, “Don’t tread on my gun rights.”

Palmer, who wore a white cowboy hat and has an elaborate handlebar mustache, introduced Foley to Pete Mathewson of nearby Scotland, who competes in pistol and rifle competitions. Mathewson pointed to his gun-themed T-shirt and told Foley, “I stand in front of the Democrats with this just to piss them off.”

Palmer said McKinney’s support for the 2013 gun control law passed in response to the mass shooting in Newtown, part of the 28th Senatorial District that McKinney’s represented in Hartford for 16 years, was a major factor in Lebanon Republicans committing to Foley, who has questioned the efficacy of the new law without calling for its repeal.

“There is a lot of Second Amendment sentiment in this area,” Palmer said.

A question for McKinney on the last weekend before Tuesday’s Republican primary is how many GOP voters will be swayed by his gun-control vote over all else. Betting that single-issue gun voters are a minority, McKinney spent Sunday in eastern Connecticut, including at least two hours talking to fairgoers in Lebanon.

Down 31 points in a Quinnipiac University poll on May 9, McKinney and his staff insist that he is closing on Foley, whom they say has been hobbled by an overly cautious campaign and McKinney’s sharply critical advertising. 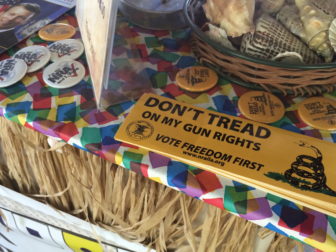 On the menu at the GOP booth in Lebanon.

No public poll contradicts or supports McKinney’s assertion. Quinnipiac University has not polled in Connecticut since May, when McKinney was one of six Republicans competing for the nomination. Both he and Foley were competitive in matchups with Gov. Dannel P. Malloy, the first-term Democrat.

Now the field is down to two.

On Saturday night, Foley and McKinney intersected at a street fair in Watertown. The candidates shook hands and chatted briefly. Rep. Sean Williams, R-Watertown, and his predecessor, Brian Flaherty, were introducing McKinney to voters.

“The lower the turnout, and the better informed the voters are, the better it is for us,” Williams said. With higher name recognition, a residual benefit of Foley’s 2010 campaign, Foley is seen as the beneficiary of a high turnout. 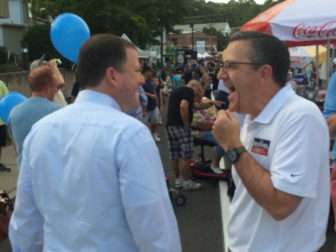 Turnout in the last Republican primary for governor in 2010, when there also was a primary for U.S. Senate, was 29.8 percent statewide and 35 percent in Watertown. But some Republicans are predicting turnout could drop below 20 percent.

In Lebanon, where the turnout matched the statewide number in 2010, the local GOP chairman says turnout could be as low as 15 percent on Tuesday.

That increases the appetite of each campaign to chase voters.

In Watertown, Flaherty tracked down the local registrar of voters when McKinney met a young couple, James Kaye and Julie Bobb, who recently moved to town and were unregistered. Flaherty arranged for the registrar to add them to the rolls on Monday.

“They already sent me an email with instructions,” Kaye said as he left the street fair.

On Sunday, McKinney was willing to talk for 15 minutes with Wayne Lanham, the trucker who wanted to know about McKinney’s stand on gun control.

“You’re not going to like this,” McKinney told Lanham. McKinney, the leader of the GOP minority in the state Senate, explained that he voted for the 2013 gun control law.

But Lanham and McKinney continued to talk about other issues, finally pausing to watch the demolition derby after an echoing metallic thud rose from the derby pit and the PA announcer screamed, “Look at the front wheel on that thing! No steering whatsoever!”

The men shook hands and parted company, Lanham unwilling to say if gun control was a deal breaker.

While Foley was escorted by the local GOP chairman, McKinney’s local contact was Patricia Pogmore of Chaplin, a recently retired state employee who can’t vote for McKinney on Tuesday. She is a Democrat who says she volunteered for Malloy’s campaign in 2010.

She said found McKinney an appealing alternative to a Democratic incumbent who she says does not deserve her vote, even if she remains a Democrat.

“If your party jumps off a bridge, are you going to go, too?” Pogmore asked. “I’m not a lemming.”

Foley said he remains confident of a victory Tuesday.

He toyed with testing his view of the future with “Ruby,” a psychic and Tarot reader who had a booth not far from the Lebanon Democrats and St. Francis of Assisi Church.

Foley approached the psychic, but Ruby was deep in consultation with another.

“She’s doing a reading,” Foley said. “I don’t want to disturb them.”