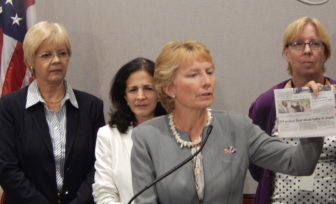 A coalition of state legislators, officials and child advocates pledged Tuesday to develop a new promotional campaign for Connecticut’s “Safe Haven” law in response to last week’s tragic discovery of an abandoned, dead infant in an East Hartford trash can.

“It’s enough to make your blood run cold,” Rep. Pam Sawyer, R-Bolton, said while holding aloft a newspaper headline about the incident during a mid-day press conference in the Legislative Office Building.

A 22-year veteran of the General Assembly, Sawyer proposed and spearheaded passage of legislation in 2000 that allows distressed mothers to anonymously and confidentially leave their newborn children in any Connecticut hospital emergency room without facing any legal charges.

The hospital is required to keep the mother’s personal information private, even from the state Department of Children and Families. It also must assign the mother a coded bracelet that she could use to reclaim the child within 30 days.

Since 2000, 23 infants have been protected through the “Safe Haven” statute, and more than 90 percent of those children have been placed with adopting families, DCF Deputy Commissioner Michael Williams said.

Sawyer, who also was joined by legislators from both parties and by representatives of the Connecticut Hospital Association and by the state Commission on Children, announced the launch of a new study panel to begin work next month to renew promotion of the 14-year-old law.

The 18-year-old woman believed to be the mother of the deceased East Hartford incident would have been four when the law was enacted, Sawyer noted.

“A bad situation doesn’t have to end in tragedy like we saw last week in East Hartford,” Sawyer said. “Younger generations probably never heard the publicity surrounding the law back in 2000 and the efforts in the following years to spread the word. It is crucial that we make sure the next generation of mothers is aware of this potentially life-saving protection.”

Sawyer’s new working group will have a head start in its promotional efforts, Williams added.

DCF officials already have decided to incorporate “Safe Haven” promotions into a new outreach campaign being planned for this fall on ways to prevent infant mortality. Though full details of this campaign still are being developed, Williams added, it will rely heavily on social media to reach new mothers.