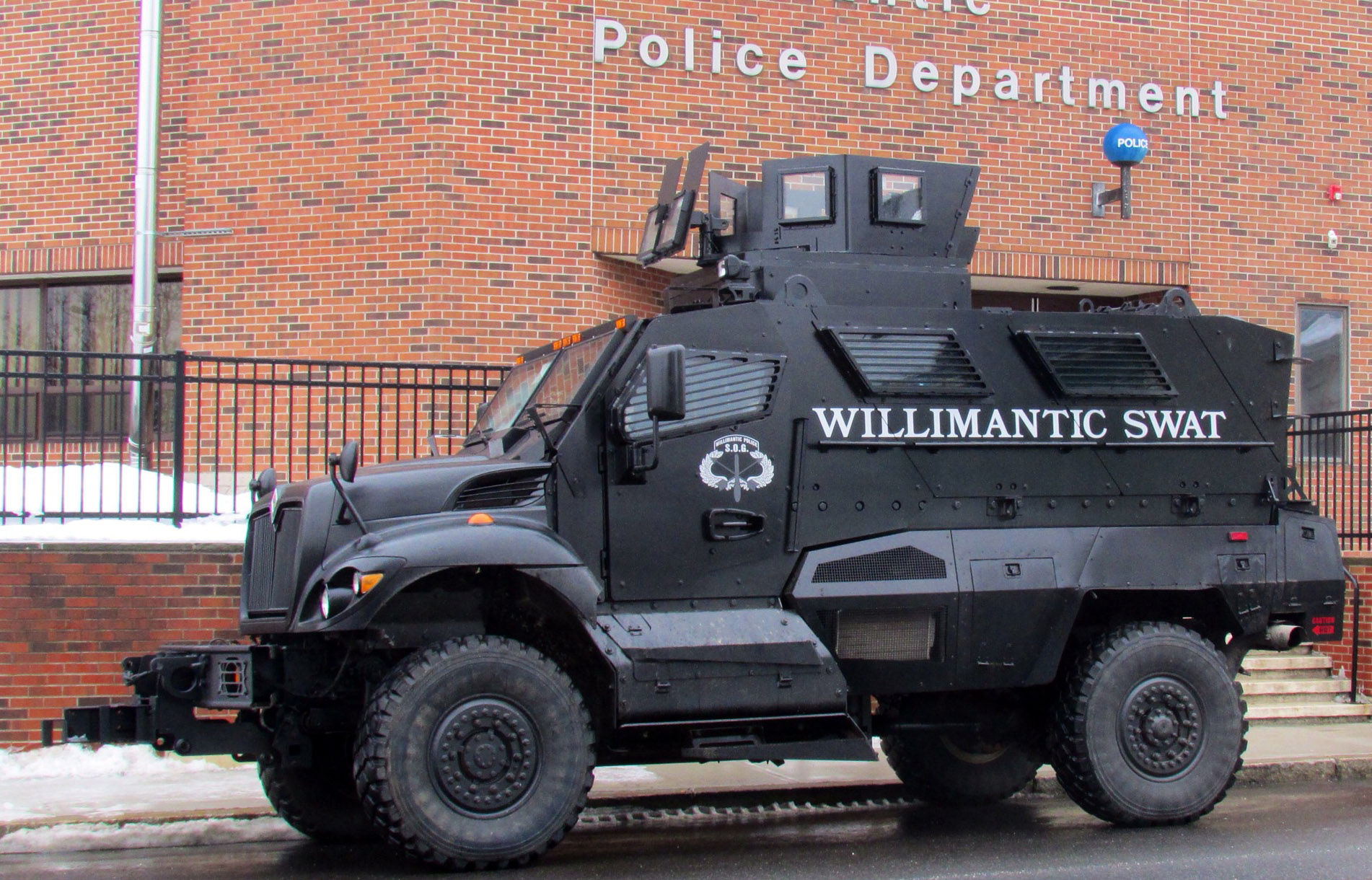 The Willimantic Police Department’s SWAT vehicle given to the town by the Department of Defense.

Washington – Images of Ferguson, Mo., police dressed in riot gear, riding in massive armored vehicles  and using high-power rifles like those used by the U.S..military has sparked debate on the wisdom of militarizing police forces,  including those in Connecticut, by giving them cast off Pentagon equipment.

Since the Defense Department established its Excess Property Program, also known as the 1033 program, in 1997, police departments across the state have acquired dozens of military assault rifles, grenade launchers, night vision equipment, mine resistant and armored vehicles and even a helicopter from the Defense Department.

The Hartford Police Department, for instance has received more than 30 assault rifles, night vision equipment, pistols, body armor and a mine-resistant vehicle from the DOD.

Police departments in New London, New Haven, Fairfield County – which also received a helicopter – have been given similar equipment. Even the 42-member Willimantic Police Department has received the gift of an armored vehicle from the Army.

But the future of the 1033 program that distributed that war-fighting equipment to local cops is in doubt.

After the heavily armed response to the rioting in Ferguson, Mo. touched off by the police killing of an unarmed black teen, President Obama has ordered a review of the program that supplied nearly half a billion dollars in military equipment to municipal police departments last year.

Congress also plans to hold hearings on the 1033 program.

In June, when a Florida Democrat tried to shut down the program, all five members of Connecticut’s delegation to the House of Representatives opposed the effort – as did most other House Democrats and Republicans. Some said the program is necessary to beef up the firepower of local police to help them fight post 9-11 terrorist threats.

“Can any… here tonight or anyone else identify a single act of terrorism that was thwarted by handing police officers helicopters that are militarized, bombs, and all sorts of gear that you would only expect to see on the battlefield?” Rep. Alan Grayson, D-Fla., asked on the House floor, before losing the vote.

While voicing continued support of the program, some Connecticut lawmakers are now agreeing with Obama that it should be reformed.

“I support a thoughtful review of this program as suggested by President Obama,” said Rep. John Larson. “There are a number of issues as it relates to homeland security that, by their nature, deal with interoperability. That’s why the Grayson amendment was too broad, however, it’s clear that the whole matter needs review.”

A senior aide to Rep. Elizabeth Esty, D-5th District, said the lawmaker voted against Grayson’s amendment because she had heard from Connecticut law enforcement officials who said the program was important, particularly as an effective way to save taxpayer money.

“Congresswoman Esty is deeply concerned with the growing militarization of local law enforcement agencies. She believes that Congress should have a real debate on this issue, not just a last-minute amendment,” the aide said.

Rep. Jim Himes, D-4th District, said “we should have an active discussion about what equipment is and isn’t appropriate for the police to use.”

“The situation in Ferguson was exacerbated by misjudgment on the part of police commanders and the political leadership,” Himes said. “The fundamental problem wasn’t the equipment the Ferguson police used, it’s that they used the equipment in an inappropriate manner.”

Himes also said there are “rare instances, whether it’s a hostage situation or a sniper attack” when the police need military equipment “but controlling a crowd of unarmed citizens isn’t one of them.”

“Assisting local police departments to prepare for natural disasters and worst case scenarios does not conflict with necessary and valuable commitments to community-based policing,” Courtney said. “In the recent past, officers from Norwich and Willimantic who were just doing their jobs were grievously injured by high-velocity gunfire from criminals with military-grade weapons.”

Sara Lonardo, press secretary for Rep. Rosa DeLauro, D-3rd District, said there were questions about whether the Grayson amendment could have prevented first resopnders from getting equipment they may need in extroadinary circumstances.

But Lonardo  also said DeLauro “is pleased the administration is reviewing the program.”

Hartford Police Department Deputy Chief Brian Foley gave the program a mixed review. He said none of the dozens of military assault rifles and pistols the department received are in condition to be of use. He also said night vision equipment has never been used.

But the mine-resistant vehicle was put into service, Foley said. Stripped of some of its armoring, it will be used as a transport vehicle to ferry police officers to emergency situations. Before obtaining the vehicle, the Hartford Police Department had to share a transport vehicle with other local police departments.

“We didn’t have one for our personal use,” Foley said.

But he conceded the vehicle they had shared with other departments isn’t often in use.

Still, the program has the potential to save the department money on munitions and other gear, so the Hartford Police Department supports it, Foley said.

He said the department’s SWAT team had used the armored vehicle it received from the Army last fall many times, mostly to rescue bystanders who could get hurt in drug raids.

“If people think this if overkill, it’s overkill until it happens in your community,” Parizo said.

He also said the military had provided seven patrol rifles that have been retrofitted to make them “department friendly” and six handguns fashioned to hold simulated ammunition that are used in training exercises.

“This is a great program if it’s not abused and the Willimantic Police Department does not abuse it,” Parizo said.