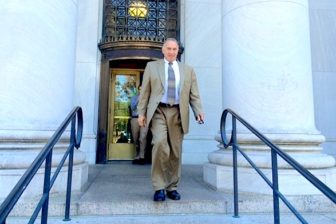 New Haven – Lots of politicians tell the press and public the truth, if not always the whole truth and nothing but the truth. But Mark Greenberg, the Republican nominee for the 5th Congressional District, may be the only candidate in this election season to actually talk about his political ambitions under oath.

Greenberg, 60, of Litchfield, a wealthy businessman and philanthropist, was the opening witness in the political corruption trial of John G. Rowland, the former congressman, governor and radio host. Greenberg presented himself in testimony Wednesday and Thursday as a political novice who did the right thing in 2009 and 2010, when he says Rowland pressed him to break campaign finance laws during his first run.

But his status as a government witness in a high-profile corruption trial could complicate the final weeks of his third campaign for the congressional seat Rowland won as a 27-year-old state legislator in 1984. For one thing, Greenberg’s lawyer, Winthrop Smith, is advising him to make no public statements during the trial about his contradictory testimony regarding Rowland, whom he alternately embraced and rejected, or its impact on his campaign.

Greenberg says he will follow that advice. That could leave him unable for the next three weeks to answer questions about his relationship with Rowland, the felon whose advice he sought in 2009 when he was contemplating his first campaign for elective office.

Over two days in U.S. District Court, Greenberg testified about his own ethics, politics and even his philanthropy as the founder and funder of the Simon Foundation, the operator of a well-regarded, no-kill shelter for dogs and cats.

But he also acknowledged “toying with the idea of having John Rowland as a consultant” over six months in 2009, deciding against the hire in October of that year, when Rowland proposed a monthly fee of $35,000.

“The price was outrageous. The consideration was very brief and very mild,” he said of his weighing of Rowland’s offer.

Greenberg said he also objected to one element of Rowland’s pitch: His consulting fees should come from Greenberg’s philanthropic foundation or real estate business, not the campaign. That would keep Rowland’s involvement secret, a violation of campaign finance laws.

Greenberg conceded refusing an invitation to join another congressional candidate, retired FBI special agent Mike Clark, in reporting allegations of wrongdoing by Rowland and a third candidate, Lisa Wilson-Foley, to the Federal Election Commission during his second run in 2012. And he sought to stay on friendly terms with Rowland, even as Greenberg, by his own testimony, suspected him of suggesting a criminal act.

His attitude toward Rowland remains complimentary, even as he described his suspicions that Rowland was trying to scam him into signing a personal services contract he calculated Wednesday as worth $720,000, a figure he upped Thursday to $790,000, a number he described as “delusional.”

In emails introduced as evidence, Greenberg would continue to compliment Rowland on his tenure as governor, calling it superior to the performance of Gov. Dannel P. Malloy. He told Rowland that he excelled as a talk show host on WTIC-AM, and he offered Rowland the use of his private plane.

“Great hearing from you!” was Greenberg’s emailed response to Rowland in March 2010, five months after Rowland made his “delusional” contract proposal.

Greenberg said that he was struck in May 2010 by how well Rowland was received at the state Republican Party’s annual fundraiser, the Prescott Bush Dinner. It was Rowland’s first appearance at the dinner since leaving the governor’s office under threat of impeachment in 2004 and pleading guilty to corruption charges that cost him 10 months in prison, ending in 2006.

“He had a crowd around him, no question about it,” Greenberg said.

Do you remember his getting an ovation? Weingarten asked.

“You know, I think he did,” Greenberg said.

It prompted another exchange of emails between Greenberg and Rowland.

“Good to see you at the Bush Dinner,” Rowland told him, renewing his pitch to be hired. “I’m not as unpopular as your campaign manager would lead you to believe!! Especially in the 5th District. I can get you elected, if you are interested.”

You were considering hiring him?

Greenberg replied that he was not then.

“I would not and could not hire him, exactly the opposite,” he said.

But he acknowledged a difficulty in personally and directly rebuffing Rowland, keeping their conversations going into the summer of 2010, eight months after deciding he would not do business with the former governor.

“I was essentially gutless,” he said.

When Clark asked him to relive the episode in 2012 when it appeared Wilson-Foley had accepted a similar offer to hire Rowland as an off-the-books consultant, Greenberg said, he declined in part out of a reluctance to insult Rowland.

“I liked John Rowland,” Greenberg said when asked why he refused to bolster Clark’s complaint in 2012 with details about his own dealings with Rowland in 2010. “I didn’t want to put salt in the wound.”

Clark is living proof of how small the political circles can be drawn in Connecticut: He was the supervisory agent in the investigation that drove Rowland from office in 2004 and to prison a year later. After retiring from the FBI, he was elected to the town council in Farmington, a stepping stone to a campaign for the open 5th District seat in 2012. He is expected to testify.

While Greenberg refused to join Clark, he said he took a stand at the nominating convention that year. When it was clear he could not win the endorsement, he urged his delegates to support state Sen. Andrew Roraback over Wilson-Foley, whom he suspected of working illegally with Rowland.

He said, “Andrew Roraback is a man of tremendous integrity.”