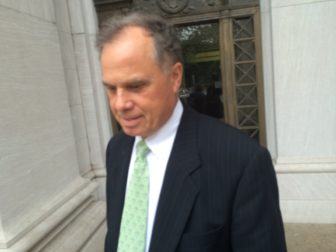 New Haven – Brian Foley conceded under cross-examination Tuesday that he and former Gov. John G. Rowland never explicitly agreed that Rowland’s work for Foley’s nursing home chain was a sham to conceal his role as a paid adviser to Lisa Wilson-Foley’s 2012 congressional campaign.

Foley, the owner of Apple Rehab and the husband of Wilson-Foley, said he hired Rowland primarily to help his wife’s campaign, but he acknowledged that Rowland also provided useful consulting advice about lobbying and other matters of import to Apple.

But Chris Covucci, who briefly was Wilson-Foley’s campaign manager, followed Foley to the witness stand, telling the jury that Wilson-Foley had admitted to him on his first day in the job that Rowland’s consulting for Apple was “cover,” a means for the campaign to hire Rowland without publicly disclosing it.

Covucci, a recent law school graduate who had worked on Tom Foley’s gubernatorial campaign in 2010, said he viewed the arrangement as a violation of federal campaign finance law, and it caused him to resign six weeks after taking the job.

Earlier, Foley repeatedly said he was drawn to Rowland for his usefulness to his wife’s campaign. If not for the congressional race, Foley said, he would have hired Rowland for no more than a month or two, not the six-month contract he gave the former governor.

But he also conceded under questioning by Reid H. Weingarten, who is leading Rowland’s defense, that Rowland met with top officials at Apple, recommended the hiring of a new lobbyist and answered periodic questions of interest to him as business owner, not just a political spouse.

Foley has pleaded guilty to conspiring with Rowland to hide what Foley says was the former governor’s status as a paid political consultant to Wilson-Foley’s campaign. But their conspiracy was never made explicit, Foley said.

“I never said those words to Mr. Rowland or anyone else at any time,” Foley replied.

Weingarten pressed Foley on his testimony that Rowland was well aware that Wilson-Foley had concluded she could not hire him as a campaign consultant for fear that associating with Rowland, a politician who resigned as governor and later served time on federal corruption charges, would harm her election chances.

Foley had testified Monday that he sent word to Rowland through his wife about signing on as a consultant to his nursing home company, Apple Rehab, at about the same time he was rejected as campaign consultant. Foley said Rowland’s reply came by email: “Brian, had a brief chat with Lisa. I get it. Let’s you and I meet.”

Weingarten challenged Foley’s conclusion that Rowland, by saying, ‘I get it,’ has signified that he understood that an offer to hire Rowland as an Apple consultant was subterfuge. 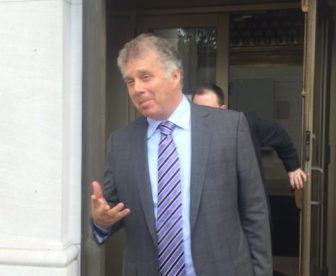 “Are you a mind reader?” Weingarten asked.

“No,” Foley said. But the timing of offering him a business deal at the same time he was being rejected as a political consultant was clear enough. “I think there was an understanding.”

“So, there was never an explicit conversation with Mr. Rowland. ‘We have to keep this subterfuge going.’ No language like that?” he asked.

“I thought it was really clean,” Foley said of their discussions. “So, you’re right.

“If there was anything between you and Mr. Rowland, it was an unspoken understanding?” Weingarten asked.

Rowland is charged with seven felony counts, including conspiring with Foley and Wilson-Foley, as well as obstructing justice and causing an illegal contribution to be made.

The government has presented evidence that Rowland did view his advice to Wilson-Foley as part of a business arrangement. Foley has testified that Rowland asked for a $10,000 bonus if Wilson-Foley won the endorsement of Republican nominating convention in May 2012.

Foley testified that the request startled him, because any such payment would have established a financial relationship with his wife’s campaign.

“My reaction was it was a red flag,” he said.

Foley said he joked there was static on the line and he couldn’t hear Rowland.