Jim Himes in 2010 in his 2010 campaign defending his seat against a challenge from Dan Debicella.

Washington — Democratic Rep. Jim Himes has mastered the high-wire act forced upon him by his job representing the 4th Congressional District.

He’s been able to balance the concerns of the district’s wealthy voters, many of whom work for the financial industry, with those of far fewer means who support Democratic policies to help the poor — all while climbing the rungs of his party’s leadership ladder.

As he seeks his fourth term in office, Himes, 48, continues to fashion himself as a Democratic moderate who rejected his party’s proposed budget because it spent too much.

“I’ve tried to be thoughtful and independent,” Himes said. “If I believe the Democratic line is not the right one, I will vote against it.”

Himes’ race is a rematch with Dan Debicella, a Republican from Shelton who tried in 2010 to unseat Himes and fell short.

When Himes first ran for office in 2008, against former Republican Rep. Chris Shays, he was helped by President Obama’s presence at the top of the ballot. He was also aided by an anti-war fervor in his district. While Shays supported President Bush’s efforts in Iraq, Himes campaigned against the war.

Gary Rose, head of the political science department at Sacred Heart University, said Himes was considered a “left of center” Democrat in 2008.

“But as the anti-war movement died, he moved very quickly to the center,” Rose said. ”One reason why Jim is a very viable incumbent is he has an excellent read on the political nature of the district. It’s very centrist.”

Himes may also have been helped by Obama’s name on the ballot two years ago, which drove Democrats in great numbers to the polls.

There’s no such advantage this time. But Himes said Debicella’s failure to win in 2010, when a Republican wave bounced most Democratic freshmen like him out of office, means his challenger is even less likely to win this year.

“Members of Congress are usually most vulnerable in their freshman year,” Himes said. “That said, I’m certainly not taking this race for granted.”

While other Connecticut House members don’t have to contend with well-funded challengers every election cycle, the 4th District has no shortage of politically ambitious Republicans –  including gubernatorial candidate Tom Foley — who are able to raise campaign cash in a wealthy district considered a “political ATM” by both parties. 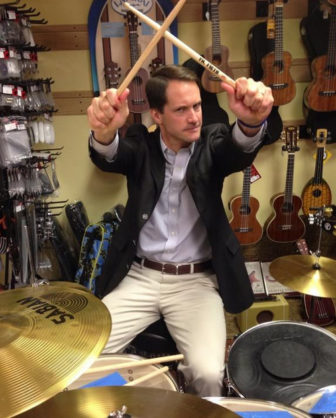 Himes had his fun on his “17 Towns in 17 Days” tour, tweeting this photo taken at New Canaan Music.

Himes spent part of Congress’ August break on a “17 Towns in 17 Days Tour” of the district and is expected to ratchet up the pace of his campaign events. But he said he’s not troubled by having to work hard to keep his seat.

Himes grew up in a very different place from the 4th District. Born in Lima, Peru, he spent his early years in South America, where his father worked for the Ford Foundation’s international development organization.

After his parents divorced, he came to New Jersey with his mother and sisters. He attended Harvard University and won a Rhodes scholarship to study at Oxford.

Himes then worked as a financial analyst for Goldman Sachs, but abandoned that job to work at a non-profit dedicated to fighting urban poverty. Having settled in Greenwich, he became active in the town’s Democratic committee before running for Congress. He and his wife, Mary, have two children, daughters, Emma and Linley.

Although some things may be similar in the Himes-Debicella rematch, 2014 is by no means 2010.

Those jobs allow him to look out for the interests of the district’s financial community and also gave him a high profile in the congressional debate over National Security Agency spying.

Himes was in the minority of lawmakers – and the only member of the Connecticut delegation – to vote against an amendment this year that would end the NSA’s practice of warrantless “back-door searches” of the contents of American phone calls and e-mails.

But Himes said the amendment was “too broadly worded” and would have prohibited “one-off operations” targeting a terrorist suspect.

Scott Benjamin, a political science professor at Western Connecticut State University, said Himes has “kept the people in the financial community happy” and “positioned himself very well” during his years in Congress. 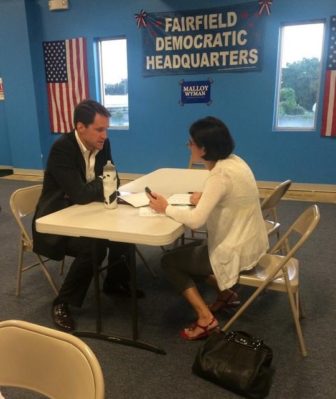 Himes is also climbing his party’s leadership ladder. Raising millions of dollars to help fellow House Democrats, Himes is the national finance chairman of the Democratic Congressional Campaign Committee, the No. 2 position in the organization, and on a short list to become the next DCCC head.

The DCCC’s current chairman, Rep. Steve Israel, D-N.Y., has indicated he will not seek another term.

“Three terms is a bad idea for our caucus. You need fresh blood,” Israel said earlier this year.

Rose said Himes’ work for the DCCC, especially if he ascends to the chairmanship, requires the congressman to perform another type of balancing act.

“I think he plays the game in Washington very well,” Rose said. “His work for the DCCC requires a liberal kind of stance on national issues. Then he’s good at projecting a centrist, moderate line in the district. He’s a very astute politician.”

Israel told the Connecticut Mirror Himes’ work for the DCCC does not interfere with this duties to constituents.

“He is incredibly dedicated to his district and focused on solving problems and getting results for the people he represents,” Israel said. “Jim uses his voice as a leader to speak for the needs of his district.”

Having pulled in more than $2 million in campaign cash, Himes has out-raised Debicella, who reported about $800,000 in cash-on-hand as of July 31.

Despite the fundraising advantage, and unlike Debicella, Himes has not run any television ads yet. But he says will, beginning next month.

“I plan to run a full campaign,” Himes said.