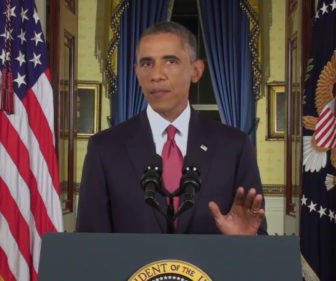 President Obama delivering his address from the White House.

WASHINGTON – Connecticut lawmakers reacted with both wariness and praise to President Obama’s plan to “degrade and ultimately destroy the terrorist group known as ISIL” and to commence U.S. airstrikes on Syria.

Rep. Joe Courtney, a member of the House Armed Services Committee, said the president “laid out a clear plan to confront the growing threat of the Islamic State,” during a prime-time speech Wednesday evening. Courtney said the president “rightly recognized that this challenge will not be solved by the United States alone” or with U.S. ground troops.

But he wasn’t completely sold.

“Like the American people, I am wary of another open-ended commitment in the Middle East, and I look forward to reviewing the plan in much more detail in the coming days to ensure that our counter-terrorism strategy against ISIS remains clear in scope, and coordinated with our partners in the region,” Courtney said.

“The president presented a strategic plan with broad goals,” he said in a statement. ” I look forward to hearing more details on how he will achieve the objectives he outlined.”

In his speech, Obama said he has ordered more than 150 air strikes in Iraq and asked Congress for authorization to approve money to train and arm rebel forces in Syria. The president did not, however, say he needed Congress’ approval to continue the airstrikes that will now reach into Syria.

“The president is confident that he has the authority that he needs right now to order the kind of military actions that he has decided to order,” a senior administration official said Wednesday.

Earlier this week, Rep. Jim Himes, D-4th District, said, “It’s important the president comes to the Congress to get backing.”

Rep. Elizabeth Esty agreed. “I strongly believe that the president must consult closely with Congress to ensure such strikes are targeted, achievable, and time-limited.”

Himes said he has a sense lawmakers want the president “to continue to engage ISIS.” But there are concerns, he said, about actions in Syria. “We have to be very careful.”

The reason for caution, Himes said, is that the United States should not do anything in fighting ISIS that would bolster the position of Syrian President Bashar al-Assad, a U.S. foe.

“But the near-term national security concern is ISIS,” Himes said. “Assad is a monster, but not an imminent security threat.”

Dan Debicella, a Shelton businessman who is running against Himes, agreed on this point with the lawmaker, saying “we should put all partisan differences aside, and support the efforts to stop the murderers in ISIS.”

“I support increasing our air support and training for those fighting ISIS in both Iraq and Syria, and I especially like building a broad international coalition to eliminate these terrorists,” said Debicella, a Republican. “But we must be vigilant that U.S. weapons and know-how do not end up with the Assad regime or other radical group.”

Rep. Rosa DeLauro, D-3rd District, said she supported the president’s plan for limited engagement and help from allies. She called on Congress to give the White House authority to train and equip Syrian forces.

“I am pleased the president said he will not allow American troops to be dragged into another ground war. Nearly 13 years after terrorists attacked our homeland, we cannot go back down that road. Congress needs to support the efforts outlined by the President tonight.”

Both Reps. John Larson, D-1st District, and Courtney wanted Congress to cut short its summer break so it could debate the president’s policy.

On Tuesday, Larson said he wanted the president to adhere to the restrictions of the War Powers Act and ask for congressional approval for his campaign.

The War Powers Resolution, also known as the War Powers Act, requires the president to end any military action within 60 to 90 days of its commencement if it has not been authorized by Congress. That’s not a hard deadline, however.

After the speech, Larson praised the president for “consulting with our allies and building appropriate coalitions with NATO, members of the Arab League and the United Nations Security Council, while informing the American people as well as congressional leadership of the threat that ISIS presents.”

Larson, however, also said Obama should consult Congress on the strategy.

“Two things remain clear – a global and regional response is imperative, and the mission and exit strategy must be clearly defined,” Larson said. “On those two issues, Congress should be engaged.”

Before the speech, Courtney said he approves of Obama’s campaign of airstrikes, but “if he’s seeking to go into Syria, that’s a different story.”

But Murphy also said “the president’s authority under Article II of the Constitution is not limitless,” and Obama should seek congressional approval for his mission.