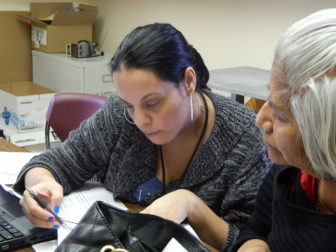 Jessie Rivera, an in-person assister, helped a woman sign up for coverage at an enrollment fair in Windham last December.

The outreach plan, still in draft form, calls for using six agencies to serve as mobile enrollment and education centers during the upcoming sign-up period. The exchange, Access Health CT, would provide $180,000 for 20 outreach staff and support for 20 other outreach workers and personnel from the agencies. Last year’s effort, by contrast, included 239 “in-person assisters” from churches, unions, community agencies, libraries and other local groups tasked with spreading information about the federal health law and helping people sign up for coverage.

The draft also calls for a year-round assistance program to help people understand how to use their coverage, although the plan for it is tentative and the funding isn’t clear.

As the Nov. 15 start of the next enrollment period approaches, the future of the in-person assistance program has been uncertain and, in recent weeks, the subject of intense concern among consumer advocates.

No money from the federal government

Unlike last year, there are no federal funds available to support the efforts. The period for signing up is only half as long as the previous six-month window. And officials expect this sign-up period to be more complicated than last year, with the dual challenge of keeping existing members insured while trying to reach the remaining uninsured, who could be harder to persuade to get coverage.

The scaled-down assistance effort drew concern from members of the exchange’s consumer experience and outreach committee, who learned of the plan Tuesday and warned that it won’t be adequate to reach uninsured state residents who face barriers to getting covered.

“Doing what you did before isn’t going to be enough,” said Alta Lash, executive director of United Connecticut Action for Neighborhoods. Those who remain uninsured are likely to be harder to find than those who signed up already, she said, and are more likely to be dealing with mental health issues or homelessness.

People who worked as in-person assisters in the past urged the exchange’s board last month to continue the program, and described helping people who struggled to understand the questions on the application form or grasp the basics of insurance. Yale researchers who studied the enrollment experience wrote that in-person assistance should be preserved and improved if Connecticut is to cover as many people as possible under the Affordable Care Act.

But Peter Van Loon, Access Health’s chief operating officer, said Tuesday that the in-person assistance effort should be viewed as one of several efforts to get people covered. They also include storefront enrollment centers in New Britain and New Haven, insurance agents and brokers trained to sign people up through the exchange, and enrollment through hospital and community health center staff.

And Van Loon said the smaller size represents both the state’s lower uninsured population, and findings that the in-person outreach program wasn’t a main avenue for getting people insured last time.

Access Health’s data indicate that nearly half of the state’s remaining uninsured live in four cities — New Haven, Hartford, Bridgeport and Waterbury — and two-thirds live in 10 cities. Van Loon said that allows the outreach efforts to be more targeted.

Although it’s not clear how many people currently lack health insurance in Connecticut, Access Health has projected based on its membership that close 150,000 state residents now lack coverage.

Van Loon also pointed to data on the channels people used to sign up for coverage during the exchange’s first sign-up period, which ended March 31. During that six-month window, 78,713 people signed up for private insurance and 129,588 people enrolled in Medicaid through the exchange.

A fraction of a fraction

In-person assisters or “navigators” — umbrella organizations that oversaw the assisters — were responsible for signing up 8 percent of the exchange’s private insurance customers and 9 percent of those signing up for Medicaid.

And among the 239 in-person assisters, Van Loon said only about 40 were responsible for the bulk of the sign-ups. The draft outreach plan calls for Access Health to reach out to the top-performing assisters from the previous enrollment period to fill the outreach roles, when possible.

Still, Van Loon acknowledged that the people who are still uninsured will likely require assistance getting covered. “They’re a retail sale. They need help going through the process,” he said.

And to one critic of the draft plan, that’s the problem.

Kevin Galvin, a small business owner and member of the exchange’s consumer committee, said there are people in the state who don’t have access to a computer or familiarity making online purchases, and won’t be able to sign up on their own. Reaching more of the uninsured will require street-level outreach, he said.

“That’s why the assisters program was so important, because it actually touched those people,” Galvin said. “And they do not have a plan to really go after the folks that we think deserve to be insured.”

The draft plan for the outreach effort calls for a two-part approach. For the upcoming three-month open enrollment period, Access Health would work with six agencies to serve as mobile enrollment and education centers. The agencies are: The Connecticut Library Association; the Connecticut Department of Labor; New Opportunities, a Waterbury community agency; The Hispanic Health Council in Hartford; The Access Community Action Agency in Willimantic; and United Community and Family Services, a community health center in Norwich.

Access Health would help promote the agency locations, provide secure computers for enrollment, pay for 20 rotating exchange staff to support the efforts, and provide training and support for 20 additional outreach staff and agency personnel, according to the draft plan.

Separately, the plan calls for establishing a year-round assistance program to help people understand their coverage and address questions. It suggests that federal funds could become available for those activities.

The Access Health board is expected to address the in-person assistance plan at its meeting Thursday morning.

Where are the uninsured?
Cities and towns with the most uninsured residents
Access Health CT