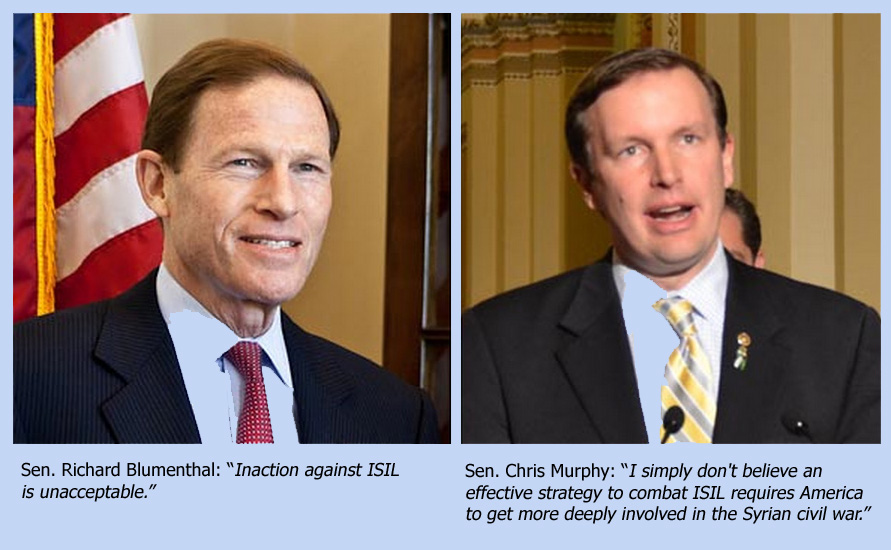 Washington – Connecticut’s Democratic senators split Thursday over legislation that would give the Obama administration authority to arm and train Syrian rebels, but the measure won approval in the Senate on a bipartisan, 78-22 vote.

Sen. Chris Murphy, who has one of the first in the Senate to voice opposition to President Obama’s plan to enlist “moderate” rebels in Syria in the U.S.  battle against Islamic militants known as ISIS or ISIL, voted against giving the White House authority to do so. ISIS has seized a third of both Iraq and Syria, declared war on the West and is thought to be responsible for beheading two American journalists.

“I simply don’t believe an effective strategy to combat ISIL requires America to get more deeply involved in the Syrian civil war,” Murphy said. “ First, the moderate Syrian rebels have shown a disturbing willingness to join forces with Islamic extremists like the Al Nusra Front, a wing of Al Qaeda, and it will be nearly impossible to stop the rebels we train from joining forces with groups that pose a real threat to the United States.”

Sen. Richard Blumenthal, who has expressed skepticism about the plan, was in the majority of senators who voted for the Syria provision. It was part of a short term spending bill that would keep the government running from Oct. 1 to Dec. 11.

“Inaction against ISIL is unacceptable,” Blumenthal said. “This savage terrorist organization is a clear and urgent threat. This narrow authorization enables training of moderate Syrians to fight ISIL in their own country. It is limited in time and scope, and it explicitly prohibits American troops in combat.”

On Wednesday, Rep. Joe Courtney, D-2nd District, was the only member of Connecticut’s House delegation to vote for the legislation giving the White House authority to train and arm Syrians.

But the measure was also approved in that chamber on a bipartisan vote.

House members were able to vote separately on the legislation that would fund the government and the Syria authorization. But they sent the two measures to the Senate as a single package.

Even lawmakers who supported arming Syrian rebels were concerned about the chances of success of Obama’s mission to “degrade and destroy” ISIS.

Since the legislation is set to expire on Dec. 11, it sets up another debate in Congress on what longer-term role the U.S. military should have in battling ISIS.

But since Congress will recess this week until after the Nov. 4 elections, the debate will be conducted in a lame-duck session.

“I remain disappointed that Congress is going to recess for the election without taking up an explicit authorization of the administration’s full strategy,” Murphy said.

To date, U.S. operations have been restricted to air support to Iraqi and Syrian troops battling ISIS, humanitarian aid and covert operations.

The debate is likely to become more partisan.

Many Democrats in Congress, including most Connecticut lawmakers, have vowed to oppose the use of U.S. combat troops in any expanded military effort the Obama administration might want to conduct. Meanwhile, some Republicans have argued that Obama’s plan will fall short of what is needed to stop ISIS.

But by voting to authorize the arming and training of Syrian rebels, Congress has come one step closer to authorizing the third U.S. military operation in 25 years.

Obama says a war resolution approved by Congress in 2002 gives him authority to continue his operations against ISIS.

It’s likely Congress will vote on a new authorization for the use of military force (AUMF) in the lame duck session, but it’s not clear how restrictive that authorization will be.

Democrats have begun drafting legislation that would last only 18 months and require regular reports to Congress.

Meanwhile, Republicans Sen. Jim Inhofe of Oklahoma and Frank Wolf of Virginia have offered broader resolutions that would allow the president to use “all necessary and appropriate force” against ISIS.

Blumenthal said his “ position in future votes will depend on whether my concerns and questions are answered.”