At a glance: The 7 charges against ex-governor John G. Rowland 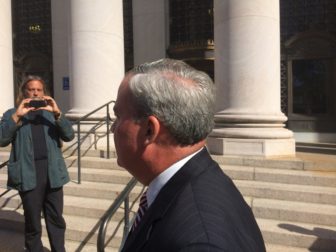 Former Gov. John G. Rowland is charged in a seven-count indictment arising from what the U.S. Attorney’s office says were separate, though similar attempts by Rowland to be secretly paid as an adviser to two congressional campaigns in violation of federal laws requiring the disclosure of donations to and expenditures by campaigns for federal office.

The government claims that Rowland, whose resignation and subsequent guilty plea to corruption charges in 2004 left him too politically toxic to be openly hired by any campaign, pitched Mark Greenberg on hiring him in 2009 for his 2010 campaign and Lisa Foley-Wilson in 2011 for her 2012 campaign.

The jury is to return separate verdicts of acquittal or conviction on each count. They deliberated for about 90 minutes Thursday afternoon, then resumed deliberations at 9 a.m. Friday.

Count One relates to his pitch to Greenberg, which did not result in a contract. Counts Two through Count Seven relate to Rowland’s being hired by Apple Rehab, which is owned by Wilson-Foley’s husband, Brian Foley. The government claims that contract was a pretext to pay him for campaign advice.

Some of the counts involve actions carried out by others, such as the filing of campaign finance reports. Rowland is accused of participating in a conspiracy. Under federal law, a defendant can be held liable for the actions of co-conspirators.

Falsification of records in a federal investigation

Rowland is accused of drafting and proposing a sham consulting contract in 2009 as part of a pitch to provide campaign advice to Greenberg. The contract never was signed

Rowland is accused of conspiring with Foley and Wilson-Foley, who have pleaded guilty to a misdemeanor charge, to conceal from the Federal Election Commission that Rowland was paid by Foley to work for the campaign. Elements of the conspiracy include allegations that they attempted to obstruct the investigation.

Falsification of records in a federal investigation

Rowland is accused of signing a consulting contract with the counsel to Apple Rehab that was intended to hide payments for his campaign advice.

Rowland is accused of knowingly and willfully causing the submission of false campaign finance reports to the Federal Election Commission at the end of 2011 and first quarter of 2012. Each report is a separate count.