Improving transportation in Connecticut: A decade of slow going

It was supposed to transform Connecticut’s aging, overcrowded transportation network.

Five increases in the state’s wholesale fuel tax to be spread across the coming decade won the near-unanimous support of the 2005 legislature and Gov. M. Jodi Rell.

The tax hikes came mostly as planned – the last two were combined into one imposed in July 2013. This year the state expects to rake in 40 percent more at the pumps, in wholesale and retail taxes combined, than it did a decade ago.

For years business leaders and economists have been clamoring for Connecticut to upgrade its transportation network. While the immediate boost in construction jobs this would create is one clear benefit, the long-term reward is much more important, said economist Fred V. Carstensen, director of the University of Connecticut’s economic think-tank.

The ability to move goods swiftly, to meet guaranteed delivery times, is more important than ever in a global economy, he said.

Both Gov. Dannel P. Malloy and Transportation Commissioner James Redeker insist the state is doing more transportation work now than it has under several previous administrations.

Yet transportation advocates counter that’s not setting the bar very high. More importantly, they add, the state is still losing ground maintaining a highway system that dates back to the 1950s, and a rail system much older than that.

“It’s all very frustrating and confusing for the average person,” said Karen Burnaska, who served on the former state Transportation Strategy Board. “But they know they don’t see the work being done.”

They also are smart enough to understand, added Michael Fox, executive director of the Greenwich-based Gasoline and Automotive Service Dealers of America, that state government’s spending of almost $1.4 billion in fuel revenues on non-transportation programs over the past decade had something to do with it.

“You cannot expect one industry to solve the budget problems of the entire state of Connecticut,” said Fox, who once charged that “the biggest price gouger in Connecticut is state government.”

Gasoline station owners have long conceded that they pass the full cost of that wholesale tax — currently 21 cents per gallon — on to motorists.

Connecticut’s combined gasoline tax of 46 cents is topped only in California and New York, where motorists pay 50 cents.

Enacted in 1979 to pay for oil spill cleanups, the relatively modest wholesale tax became more important in 2005 when Rell and the legislature launched a major initiative to replace an aging fleet of commuter rail cars and fund other strategic rail and highway projects.

Lawmakers had expected that by 2014 the tax would collect $100 million more per year than the $179 million it raised in 2005. But it needed just one year to surpass that growth target.

And while the state’s coffers were swimming in revenue from a wholesale tax that already had doubled, officials found other uses for some of that money besides transportation.

Rell had sought to raise the income tax in 2007 to increase education aid to cities and towns, but she ran into heavy opposition from her fellow Republicans. She abandoned the income tax hike, but the extra education aid survived. And fuel tax receipts, which transportation advocates assumed would be dedicated primarily to highway, bridge and rail work, were given a new purpose.

But by 2009 Connecticut – and its budget – were feeling the effects of The Great Recession, and the prospects of devoting more fuel revenues to transportation grew slim.

Rell and the legislature borrowed $1 billion to close a year-end deficit in June 2009.

And when she and the 2010 legislature left office in January 2011, nonpartisan analysts were projecting an unprecedented $3.67 billion hole – worth almost one-fifth of annual operating expenses – in the general fund. 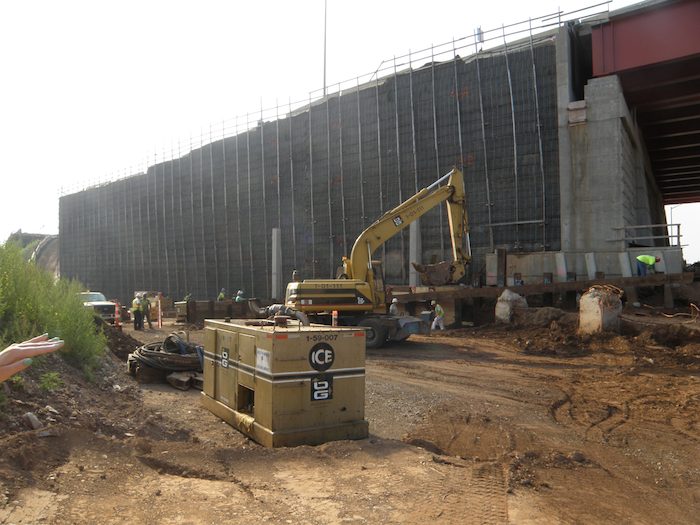 Work at the old Q-Bridge foundation, prior to construction of a retaining wall that would support traffic from I-95 Southbound to I-91 Northbound. (Image courtesy of the State Department of Transportation)

Malloy blasted the practice of siphoning off fuel revenues as he ran for governor in 2010.

But once in office and saddled with a record-setting deficit and a sluggish economic recovery, Malloy raided the transportation fund as well – albeit in smaller amounts than Rell took, and in less obvious ways.

Add up the pluses and minuses and the transportation fund received $91 million less in 2013-14 than originally promised in law.

“You guys point out that I might not be pure because we have some one-time revenue,” Malloy told The Mirror in an interview this summer. “One-time revenues appear in every single budget. That’s the nature of it.”

This year’s budget employed a smaller raid on transportation of about $20 million, and the governor insisted that, if he is re-elected, there will be no more going forward.

The state’s transportation program also has been hampered by a lack of staffing at the DOT. CSEA-SEIU Local 2001, the union representing DOT planners, engineers and architects, has complained repeatedly over the last decade that the department is short-handed.

Early retirement and other initiatives designed to reduce the overall size of state government have taken a toll.

And while Malloy has refused to pay incentives to retire, he negotiated new restrictions on retirement benefits in 2011 that applied to most workers that failed to retire before October of that year.

Like the retirement-incentive programs of 2003 and 2009, this produced big savings for the state’s operating budget, but it also led to a dramatic drop in transportation staff.

The new budget Malloy and lawmakers approved in May did add more than 100 full-time positions to the department, focusing on engineers and other planning staff needed to launch more projects.

But just because a position is funded in the budget doesn’t mean it actually will be filled.

Even though the budget added jobs on paper, the DOT had 145 fewer full-time staff on Sept. 1 – 2,937 in total – than it had when the fiscal year started on July 1, according to the monthly statewide personnel report.

And a frequent Malloy tool for mitigating budget deficits has been to freeze vacant positions in state government. So with a $1.4 billion deficit projected for the next budget, transportation advocates already are worried many of the new DOT jobs in the budget will remain unfilled.

“I think it is relatively easy to talk about the importance of investing in Connecticut’s transportation system.,” said Don Shubert, president of the coalition of labor trades and builders known as Connecticut Construction Industries Association The real challenge is figuring out how do you pay for it?”

The story is the first of three in a series. Read Part Two here.