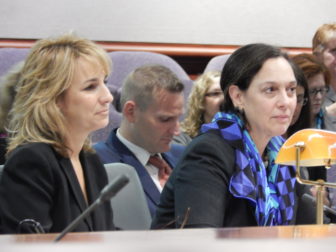 The Department of Children and Families also recommended finding ways to prevent deeper problems by helping parents, child-care providers, school personnel and pediatricians better foster healthy development in children and identify problems early. And the plan calls for families of children with mental health needs to have more input in the behavioral health system.

Not clear yet: What the recommendations would cost, how the redesign would work, or how several of the plan’s provisions would apply to the 56 percent of Connecticut youth covered by private insurance.

The recommendations — 14 goals and 38 strategies — were developed as part of a plan required under legislation passed after the Newtown shootings.

Some recommendations, like redesigning the system, consist largely of plans for additional exploratory work, rather than a blueprint for making changes. Many will require legislative action and funding. DCF officials said they didn’t know the full price tag, but suggested that some costs could be offset by savings from better organizing the fragmented mental health system.

“This is the beginning,” DCF Commissioner Joette Katz told legislators during a presentation on the plan Wednesday. “It’s a five-year plan.”

The state’s mental health system has been under closer scrutiny since the Newtown shootings. More recently, lawmakers have raised concerns about a recent surge of children in psychiatric crisis in emergency rooms.

DCF itself has faced criticism from some families of children and teens with mental illness and from legislators, some of whom worry that the department has not adequately served those with intense needs and has moved young people out of residential- or congregate-care settings without assuring adequate services for them in the community. Some parents have raised concerns about DCF’s being in charge of the plan.

Morna Murray, executive director of the Connecticut Community Providers Association, which represents private, nonprofit social service providers, praised the plan’s goals, but said she’d like to see data to show that the proposed changes will work.

“The commissioner stated they wanted to have an array of services that were adequately resourced and accessible by all. We agree with that statement 100 percent,” said Murray, who was a member of the advisory committee for the plan. “Now, how do we ever implement something like that in an environment where it appears that resources are more scarce than ever?”

According to the plan, approximately 156,000 Connecticut children — one in five — have diagnosable mental health symptoms. But most don’t get treatment.

Katz noted that the plan was based on input from people across the state. The department contracted with the Child Health and Development Institute of Connecticut to draft the plan. Among the feedback those developing the plan received:

“The current array of services is insufficient” to meet children and families’ needs, Katz said.

Although the plan calls for redesigning the care system, it doesn’t specify how. Instead, it calls for establishing a task force to examine current spending, services and gaps, and ways to improve. It would also explore pooling funding across state agencies to create a single entity to finance children’s behavioral health services.

The plan also envisions having regional care management entities to streamline access to mental health services — something that drew questions from legislators concerned about creating new layers in the system.

Mary Jo Andrews and Carol Poehnert, who are part of a group of mothers of young people with mental illness and who submitted their own recommendations to DCF, said they liked the idea of care management that could help families access care. But they were concerned that the system would initially only be available to people covered by public programs, not those with private insurance. The plan says private insurers would be able to participate, but wouldn’t require it.

DCF officials said if the system redesign works, it could be appealing for private insurers to participate.

Andrews and Poehnert praised the plan overall, but said they wished it included a strategy for addressing stigma, such as adding lessons on mental illness and stigma to middle and high school health classes.

“As mothers, we feel that boy, if you could get rid of the stigma or really reduce the stigma, your child’s lives and the family’s lives would change dramatically,” Andrews said.

Other recommendations include financial incentives, training or other methods to ensure that primary-care providers, educators and home-visiting programs conduct screenings to identify developmental and behavioral issues. Some experts in early childhood have pointed out that screening alone won’t be effective if there aren’t more interventions available for very young children.

The plan also calls for ensuring that people who work with young children and youth understand how to promote social and emotional development, how to recognize early signs of problems, and how to link families to services when needed. The plan suggests beginning with people who work with young children, since they have the opportunity to make the biggest difference, Katz said.

Rep. Toni Walker, D-New Haven, asked about the plan’s call for schools and pediatricians to play a greater role in addressing mental health issues, noting that teachers are not trained in that sort of assessment.

Kristina Stevens, DCF’s administrator for the clinical and community consultation support division, said families repeatedly described pediatricians and school personnel as the people who know their children best and where they’d like to get services. She said the idea was to get mental health skills into those settings, possibly through school-based health centers or having mental health services located within or near primary-care offices.

While some legislators praised the plan, Rep. Douglas McCrory, D-Hartford, had more immediate concerns. He works in a school and has several students who need mental health services. How can I get them help? he asked.

Stevens replied that families have said they have to go through multiple avenues to get care, they don’t know what they’ll get, or they’re not sure how to access it.

McCrory tried again: “How do I get the services to the parents tomorrow or next week?”

Stevens gave what she called the unpopular answer: the plan was developed to address those sorts of concerns.

“It can’t be fixed today,” she said. “What we’re saying is take advantage of this blueprint.”