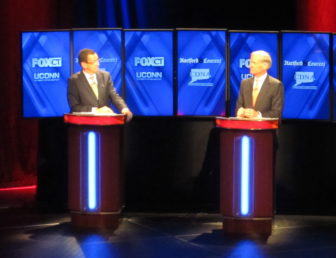 Storrs — Democratic Gov. Dannel P. Malloy and Republican Tom Foley sharply questioned each other’s character, ability and records Thursday night in the season’s wildest debate, a televised confrontation that resurrected Foley’s long-ago night in jail and Malloy’s brush with a mayoral corruption investigation in which he was cleared.

Foley raised a decade-old investigation of Malloy that closed in May 2005 with a prosecutor’s finding of no wrongdoing, a shot that the often combative governor ignored for much of the debate, finally delivering a blistering rebuttal that seemed to rattle his opponent with the reference to his night in jail.

Foley, 62, a Greenwich businessman and former U.S. ambassador, said he proposed a truce after the exchange, an offer that Malloy, 59, a vulnerable first-term Democrat, is unlikely to accept after a night in which he shifted attention from taxes and the economy to his challenger’s record and character for the first time in their campaign.

They debated at the University of Connecticut before an audience of 1,100. It was sponsored by The Courant and FoxCT and televised live on Fox. 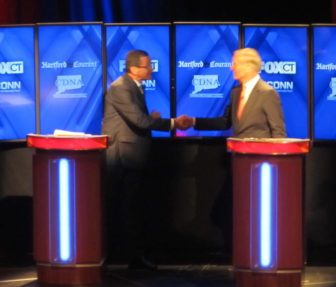 It took a while, but they shook hands.

During and after the debate, Malloy challenged Foley to explain the $2.8 million business loss he recently disclosed, leaving him with no taxable income in 2011. Foley released summaries of his taxes for 2010, 2011 and 2012.

The governor said Foley’s campaign largely rests on his acumen as a businessman, so the public deserves to know the nature of the loss and the deductions he took to avoid taxes in two of three years in which he shared summaries of his federal returns.

Foley declined to explain the nature of the loss and accused Malloy of trying to divert attention from his record.

“I think the end of the debate here was kind of a waste of the viewers’ time, because he’s talking about things that happened a long time ago, and most of them aren’t even true. And they don’t have anything to do with Connecticut’s future,” Foley said.

But Foley said he did not regret being the one to make character an issue that quickly overshadowed the rest of the debate. Foley said raising the investigation into whether Malloy obtained favors from city contractors while he was mayor of Stamford was appropriate.

“It’s an important piece of information to know about the governor,” Foley said. “We were asked about integrity and character. You know, listen, if you’ve been investigated while serving in a public office for serious crime, I think the voters should know that.”

News of the investigation in 2004 forced Malloy to suspend his first campaign for governor for 17 months, a period in which he invited reporters to examine copies of checks and other documents to fight the allegation he had accepted free work on his house.

In May 2005, Chief State’s Attorney Christopher L. Morano closed the investigation, thanking Malloy for his cooperation and stating in a letter that an extensive investigation found no evidence of wrongdoing. Malloy recovered to win the 2006 Democratic convention endorsement, only to lose the primary. 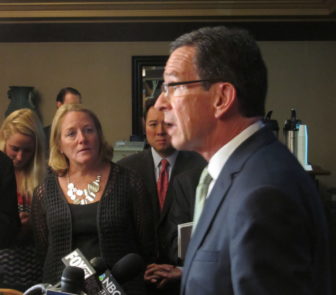 As his wife, Cathy, listens, Malloy says, “I never drove my wife off a road.”

Foley was twice arrested after alleged road-rage incidents, once in 1981 after a party on Long Island and again in 1993 in Greenwich after a dispute with his ex-wife, Lisa. Neither case was pursued by authorities.

In 1981, when he was 29, Foley was arrested after another motorist accused him of repeatedly driving his Land Cruiser into the back of a car at high speeds on a dark road in Southampton, N.Y., after a party. Foley was charged with first-degree attempted assault, but the case was not prosecuted.

The felony arrest raised another issue for Foley: He failed to disclose it during an FBI background investigation when President George W. Bush, for whom Foley was a major fundraiser, nominated him as ambassador to Ireland in 2006 or earlier for a civilian post in Iraq. Foley said since the case was not pursued, he didn’t believe he was formally charged.

“I never lied to the FBI. I’ve never been arrested. That’s who I am and what I am,” Malloy told reporters, his wife, Cathy, standing nearby. “I never drove my wife off a road.”

In the 1993 case, Foley’s ex-wife accused him of forcing her off the road as she drove away with their infant son. Both were arrested. Foley denied trying to stop his ex-wife. 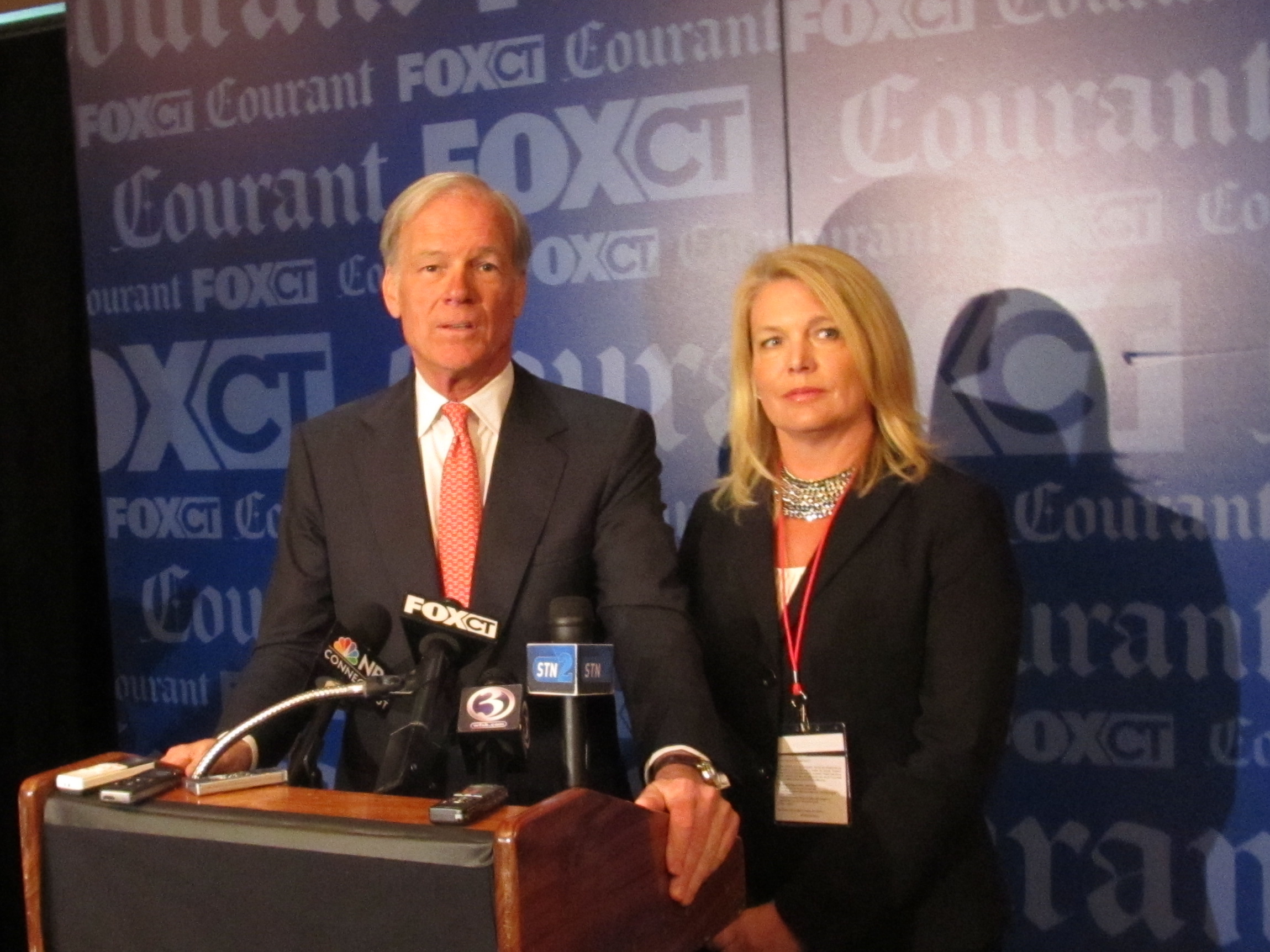 The vitriol overshadowed what had been a lively debate on issues.

The well-trod terrain surrounding the gun control law passed after the Newtown school massacre yielded a fresh moment: Foley, who has promised to sign a repeal of the law, denied he would repeal the measure, but the statement turned on semantics.

Foley eventually made clear he based his answer on the fact that a governor cannot unilaterally repeal a law.

“Now you want to fishtail around, flop back and forth, have it both ways,” Malloy said.

After repeated questions from reporters after the debate, Foley acknowledged that he would sign a repeal bill, though he said he would not seek one.

A question on whom the two men saw as their greatest influences provided one of the few softer moments. Malloy cited his mother, who helped him to overcome severe learning disabilities. It gave Malloy an opening to talk about his struggle with dyslexia, his graduation with honors from Boston College and his coping with law school by using audio recordings for the blind.

“We finally found something we can agree on,” Foley said.

He, too, credited his mother’s influence.

As the debate ended Thursday night, Malloy and Foley stood at their lecterns. Only after the broadcast ended did they turn and shake hands.

The debate will be rebroadcast by Fox at 10 a.m. Sunday.

Related Stories
The Remaining Debates: Three or Four?
Tom Foley has not agreed to the NBC Connecticut debate.