In 5th debate, Foley takes the 5th on climate change 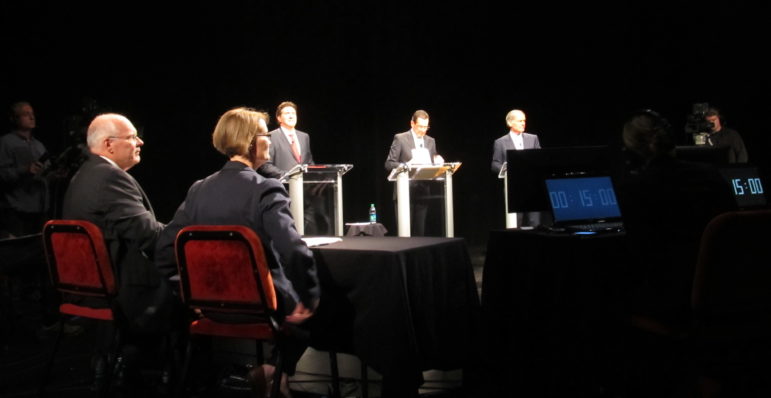 All three candidates debate for the first time: Joe Visconti, Gov. Dannel P. Malloy and Tom Foley. At left are Paul Choiniere of The Day and Harriet Jones of WNPR

“I think it doesn’t really matter,” Foley said of the cause for a steady increase is worldwide temperatures. “It happened.”

“Of course, it matters,” Malloy said. “Of course, climate change is real. To deny that is to deny reality.”

Foley told reporters after the debate that he had no opinion on the causes of climate change.

“I’m not an expert on global warming, so I haven’t had a chance to read all the reports and have an independent opinion,” Foley said. “The question is whether or not you can do anything about it…Connecticut on its own is not going to solve global warming.”

“Tom Foley had a meltdown on climate change tonight, and of course it makes a difference, because we know what’s causing climate change. It’s particulates,” Malloy said. “It’s certain greenhouse gases that are being put into the atmosphere in unprecedented amounts.”

Visconti said he believed climate change is at least partly caused by human activity, but that natural cycles also might be at play. He referenced the book, “Chill,” which breaks with the vast majority of scientists to offer a skeptical view of global warming.

Climate change was a fresh topic in the long season of debates, the fifth between Malloy and Foley and first involving Visconti, a conservative former GOP councilman from West Hartford long active in Tea Party politics and gun rights.

Locked out of the first four debates, Visconti was welcomed on the stage of the Garde Arts Center by Malloy and Tom Foley. He changed the dialogue on gun control, campaign finance and the dynamic between the major-party nominees.

Malloy, the first-term Democrat, praised Visconti for his stated intention to repeal gun controls passed with the governor’s support after the Newtown school massacre. It was a set up for an insult to Foley, who has downplayed his opposition to the law.

“Let me compliment Mr. Visconti,” Malloy said. “At least he tells you what he thinks and what he wants to do.”

Unless Foley changes his mind, the debate will be the only one of the campaign featuring all three candidates. Foley says he will not attend next week’s televised debate on NBC Connecticut with Malloy and Visconti.

The debate Thursday was sponsored by The Day of New London and CPTV and WNPR radio and broadcast live on public television and radio. Like NBC, the sponsors set a threshold of five percent for Visconti to participate. He was at nine percent in the most recent poll, with Malloy and Foley tied at 43 percent.

“Thank you for having the integrity to have me on your stage,” Visconti told the sponsors.

Visconti said neither Malloy nor Foley are willing to cut spending and both are wrongly discounting the fiscal challenges that lay ahead for Connecticut over the next three years. The legislature’s non-partisan Office of Fiscal Analysis projects a deficit next year of more than $1 billion.

“I have not heard that discussed on this stage, and this is why I am here. We have three tidal waves coming,” he said.

Visconti, who shied from the exchange of well-practiced barbs tossed at each other by Malloy and Foley, praised both opponents as men, while criticizing Malloy for his record and Foley for his refusal articulate detailed positions.

Visconti used his closing argument as a plea to be taken seriously, noting his support is nearly 10 percent on a campaign budget of $20,000 and a cadre of volunteers, many of whom loudly cheered him.

“I can become your governor. All you have to do is go out and vote,” Visconti said. “Don’t believe the cynics. Get out and vote for me.”

Visconti is the only candidate for governor not participating in the state’s voluntary program of public financing, which provided Malloy and Foley $6.5 million each for their general-election campaigns.

Foley accused Malloy of subverting the program by helping the state Democratic Party raise money from contractors, who cannot directly give to candidates. Malloy noted that Foley was the only candidate on stage to pay a financial penalty to the State Elections Enforcement Commission over a political action committee buying him a poll.

Foley’s campaign has been focused on the record of Malloy, who raised taxes by more than $1.5 billion in his first year and is viewed unfavorably by more than half of likely voters. Thursday night was no different.

He framed the election as a simple choice.

“If he wants to put it that way, he can put it that way,” Malloy said after the debate. “What I would  say is if you think Tom Foley has a plan, you’re probably foolish enough to vote for him. He doesn’t have a plan.”

Casual listeners may have thought Foley promised them a major tax cut when he said he would return to voters “the taxes Gov. Malloy has taken out of your pocket.”

He did not. Foley said later he was referring to the half-point cut in the sales tax he had previously proposed.