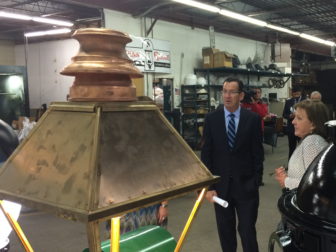 The state Department of Labor reported that Connecticut rebounded strongly from a weak August, gaining 11,500 jobs in September. The agency also downgraded the August decline from 3,600 jobs lost to 1,200.

The unemployment rate in September reached its lowest point since shortly after Connecticut entered the last recession in November 2008, and September’s numbers represent the single-largest monthly gain April 1994.

In an interview with The Mirror, Condon acknowledged that Connecticut’s having its best job-growth month in two decades just before the election was likely to spark questions.

“It is coincidence,” he said. “This was an unusually strong month.”

Some of the September gains, Condon said, were anticipated a month ago. The August job numbers for local school systems and for leisure and hospitality businesses appeared to underestimate employment in these areas.

Condon added that the labor department’s report relies entirely on data provided by the U.S. Bureau of Labor Statistics which “have proven to be quite volatile” and can shift significantly from month to month.

Condon added that “monthly, sample-based labor statistics can be volatile in either direction and should be looked at in the context of longer trends over several months.”

After touring a family-owned lighting manufacturer in North Branford that added three jobs after winning a $100,000 state grant, Malloy told reporters he was gratified both by the September job numbers and the restatement of the August statistics.

Malloy said he understands that no one is satisfied by the pace of the recovery.

“We were in a deeper hole than a lot of places in January of ’11, and it’s taken a while to get out,” Malloy said. “Right now, the Republican Party is running an ad that says we have the worst job numbers in the country. That’s not true at all, by any stretch of the imagination. They’re just out there flailing away and not telling the truth. And we’re telling the truth.”

The August losses have been a frequent component of Foley’s campaign statements. The Greenwich businessman argues that Connecticut’s recovery lags that of both the nation and the region due largely to anti-business policies by Malloy’s administration.

Malloy was all but gleeful Monday at saying that Connecticut was outperforming New Jersey, whose governor, Chris Christie, has been campaigning for Foley as chairman of the Republican Governors Association.

“Our numbers are blowing them away, absolutely blowing them away. And yet this is a guy that Tom Foley keeps bringing into the state talking about how great a governor he is,” Malloy said. “Well, if he is a great governor and we’re blowing him away on economic development, on job creation, on percentage of increases, then I guess what he’s saying is I’m a pretty good governor.”

“We are glad that Connecticut picked up jobs last month, but it is still not enough,” Foley said. “We have only recovered 70 percent of the jobs lost during the recession and we still have one of the worst job recovery rates in the nation.  Our weak recovery is the result of Dan Malloy’s failed policies and things will not improve without a change of leadership and a new direction.”

The Connecticut Business and Industry Association was cautious Monday with its analysis of the new numbers.

“Although Connecticut has gained back over 70 percent of jobs lost during the recession, we still lag the rest of the nation, which has fully recovered,” said Joe Brennan, the association’s executive vice president.

The Waterbury market was the only one to post job losses, dropping 300 positions in September.