Another surprise in a 5th CD debate, this time on taxes 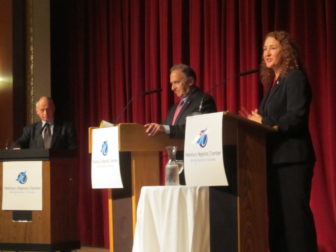 Waterbury – Republican Mark Greenberg surprised U.S. Rep. Elizabeth Esty, D-5th District, at their final debate Tuesday by declaring himself open to a higher Social Security tax, despite attacking her in a new TV commercial for taking the same position.

“Let’s have a debate about it. I’m willing to compromise,” said Greenberg, referring to a cap on wages subject to Social Security tax. Annual wages above $117,000 are now exempt.

“Now, I guess we have a new thing on the table,” Esty said. “I’m glad you’re willing to look at the income cap.”

It was the second time in as many debates that Greenberg surprised Esty. At their only previous debate, Greenberg said he supported universal background checks for gun purchasers, a statement that quickly prompted the NRA to downgrade his A rating to an F.

With two weeks left in their race, which seems to have slipped off the radar of the national political parties, the two candidates shook hands Tuesday without plans to debate again.

The 5th Congressional District race began with high hopes for Republicans. They saw the sinking fortunes of President Obama as a mid-term albatross to be hung around the neck of Esty, a freshman Democrat running in Connecticut’s most competitive district.

But as Greenberg saw Tuesday, Esty is a Democrat running as a pragmatist, someone who talks more about her favorite Republicans in Congress than she does about the present Democratic occupant of the White House.

The president’s standing in the district, which he carried two years ago, but by his narrowest margin, was made clear by Esty’s plans to skip Obama’s rally in Bridgeport and by Greenberg’s closing argument: A vote for Esty is a vote to support the president’s agenda over the final two years of his term.

Esty, whose campaign commercials have featured constituent services on behalf of veterans, ignored Greenberg’s invitation to debate the merits of the president’s record or the efficacy of his signature achievement, the Affordable Care Act. She said she deserves re-election because she is effective in a Washington known for gridlock.

She pointed to legislation on clean energy, veterans’ benefits and education that she says she helped pass by working with Republicans.

“So, I think I have demonstrated the sort of practical effectiveness and a tone and an approach that is critically important in this time, when frankly there is a lot of finger pointing and fighting, but not enough getting things done,” Esty said. “And I can tell you there are people who want to get things done. I’m one of them.”

Greenberg described Congress as broken, and the only solution is changing the foundations of the institution, starting with term limits. He named term limits as a top priority and worked the concept into answers to questions about how he would interact with leaders and make Congress more effective.

“Let’s get career politicians out of office and get the regular folks like you and me in office so that we can really represent the best interests of the district and the state and the country,” Greenberg said. “If we change the foundation, we’ll be able to get through the gridlock.” 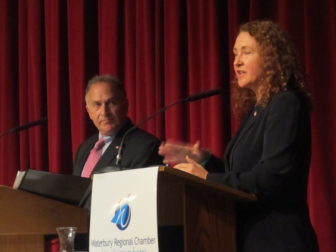 Greenberg and Esty at their second and final debate.

Esty and Greenberg did clash on Social Security, even as Greenberg softened on the possibility of extending the life of the retirement program with higher taxes. Greenberg repeatedly accused Esty of falsely portraying his position in a television ad that combines quotes from different speeches to back a claim that Greenberg would “end Social Security’s guarantee.”

He arrived with a poster-sized reproduction of a Hartford Courant graphic that pronounced Esty’s ad as “false.”

Greenberg unfurled it and held it up three times during the one-hour debate.

“It’s a cut-and-paste butcher job,” he said of the ad.

A question about what each candidate would do to break the gridlock in Congress, where Republicans control the House and are favored to capture the Senate, did not spark a denunciation by Esty of the GOP majority.

“I would continue to do what I’ve been doing if I have the honor of being re-elected, because I would tell you there are more people of good will than we would know, because frankly it doesn’t make the headline and it doesn’t make the Sunday morning talk shows,” Esty said.

After the debate, Esty casually distanced herself from the president, saying she would be happy to campaign with Obama, but only in the unlikely event that Obama should happen through her district, instead of in Bridgeport.

What was a weakness in the Democratic primary during her first race for Congress – a complaint by liberals that she was too moderate as a one-term state legislator in Hartford, despite a vote to abolish the death penalty that contributed to her defeat after one term – has helped her campaign for re-election as a pragmatist.

Esty, 55, and Greenberg, 60, each talked about the sharp differences that separate them, but those distinctions were muted at a debate before the Waterbury Regional Chamber at the Mattatuck Museum.

Both candidates pledged to keep working for federal funding to expand I-84 to three lanes between Waterbury and Danbury, a multi-billion-dollar project that the state Department of Transportation removed from its priority list as financially and politically impractical.

Greenberg, who won GOP nomination this summer in this third try, is a social conservative endorsed by the Family Institute of Connecticut, which opposes abortion and gay marriage. Esty is a social liberal who has tried without much success to draw out Greenberg on reproductive rights.

The two did disagree on energy policy. Greenberg said he supports solar energy, but he also backs increased drilling for oil in the ocean on the continental shelf and the use of “clean coal.”

Esty said “clean coal was an oxymoron,” and burning oil for electricity in Connecticut would exacerbate the state’s already high incidence of childhood asthma.

The National Republican Congressional Committee has not conceded the 5th District, but its Democratic counterpart decided recently to focus its resources elsewhere on the basis of internal polling showing Esty with a double-digit lead.