On Sunday before election, Obama will be in Bridgeport 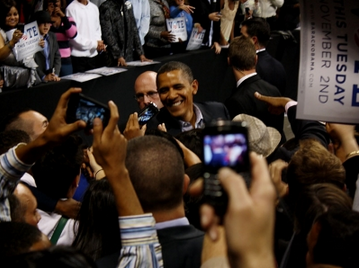 President Obama in Bridgeport in 2010.

President Obama is more than making up to Gov. Dannel P. Malloy for canceling a mid-week rally in Bridgeport last week, coming instead in campaign primetime: the Sunday before the election.

A political source who confirmed the visit was unaware if Obama still will appear at Bridgeport Central High School, where he had been scheduled to appear Oct. 15 for a weeknight rally, or if he might move downtown to the 10,000-seat Arena at Harbor Yards.

Four years ago, Obama drew a capacity crowd to the arena on the Saturday before the election, a visit that Malloy credited with helping turn out a strong vote in Bridgeport and other cities.

Last week, Obama abruptly canceled political trips to New Jersey for a U.S. Senate fundraiser and to Bridgeport for what was to have been his first public rally of the 2014 campaign season. Instead, he convened a meeting on the U.S. response to the Ebola outbreak.

The White House commitment comes on the same day that the Malloy campaign released a radio ad in which the governor is endorsed by an Obama more popular than the president, First Lady Michelle Obama.

She called the governor a politician who delivers.

“Dan Malloy doesn’t just talk about raising the minimum wage, he did it,” the first lady says in the ad. “He didn’t just talk about paid sick leave, he made it the law. He hasn’t shied away from reducing gun violence. He passed one of the nation’s toughest laws to protect our kids.

“Dan Malloy is a serious guy, and he is seriously committed to the right things. So, when it comes to the issues we care about, whether that’s a woman’s right to choose or protecting our families from gun violence or making sure our kids get the education they need, we know that Dan Malloy will be on our side, standing up for families and our values. That’s really what’s at stake in this election.”

With his own job-approval rating low, the president has not been in high demand this cycle for public rallies.

U.S. Rep. Elizabeth Esty, a first-term Democrat seeking re-election in the state’s most competitive district, the 5th of western Connecticut, said earlier Tuesday after a debate that she would not attend an Obama rally outside her district.

Esty’s opponent, Republican Mark Greenberg, devoted much of his closing argument in the debate to an effort to tie her to the president. Esty said she was not running away from the president, noting she appeared with him earlier this year at a rally in New Britain, which does fall inside her district.

Obama was in New Britain promoting a $10.10 minimum wage, a standard Connecticut became the first to endorse with a law that will increase the minimum here every year until reaching $10.10 in 2017.

Bridgeport is in the 4th District and is represented by U.S. Rep. Jim Himes, a Democrat who unseated Republican Chris Shays in 2008, helped by the president’s coattails.

Himes stood outside polling places in Bridgeport that year next to a life-sized photo of him with Obama.