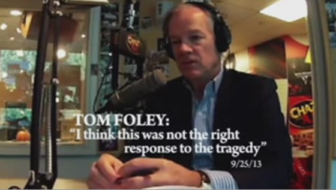 The sudden influx of cash is dramatically raising the profile of gun control as a wedge issue dividing Malloy and Republican Tom Foley, who has tried to downplay his opposition to the Newtown law by saying there is little chance of repeal by the General Assembly.

“The difference is so clear and so stark that we wanted to get involved,” Howard Wolfson, a senior adviser to Bloomberg, told the New York Times.

A local affiliate of Americans for Responsible Solutions, the super PAC co-founded by former Arizona Congresswoman Gabrielle Giffords after she was nearly killed by a gunman, previously disclosed the expenditure of $501,000 on TV commercials and $200,000 in direct mail praising Malloy and attacking Foley.

So far, the spending is one-sided. An industry trade group, the National Shooting Sports Foundation, has spent $60,000 on an ad criticizing Malloy for unfairly attacking Connecticut’s industry.

The NRA has yet to make any significant expenditures, but it gives Malloy an F, a grade its says goes to a “true enemy of gun owners’ rights.” Foley gets a B-minus as a “generally pro-gun candidate,” while Joe Visconti, a gun-rights activist on the ballot as a petitioning candidate, is not mentioned on the NRA ratings page.

The heavy spending by the two national gun-control groups comes after in-state backers of gun control, including some families of the Newtown victims, have managed to raise relatively modest sums in support of the governor and legislators behind the law.

The Connecticut law passed in 2013 expands background checks required for the purchasers of firearms and ammunition and bans the retail sale of military-style semiautomatic weapons, such as the AR-15 used in the Newtown attack, and large-capacity firearms.

Malloy says Foley has spoken in code on the issue, quietly signaling his support to gun-rights groups such as the Connecticut Citizens’ Defense League, which endorsed the Republican, while trying to suggest to the rest of Connecticut that the law is not in jeopardy.

Foley says he would not seek to repeal or revise the law, but he would sign a repeal bill should one pass. He has called the law an “inconvenience” to law-abiding gun owners that would have done nothing to prevent the massacre of 20 first-grade students and six adults at Sandy Hook Elementary School in December 2012.

Bloomberg opens with a picture of a Newtown memorial, then cuts to Malloy signing the gun bill into law. It immediately links the expanded background checks to Connecticut’s falling crime rate. “Murders are down, lives saved,” says the narrator. “Tom Foley’s reponse?”

Foley appears on screen and says, “I think this was not the right response to the tragedy.”

Ignored in the ads is Visconti, a gun owner who is calling for the repeal of the Newtown law.

(The Bloomberg ad is not available on YouTube, but it can be seen here.) Bloomberg’s PAC, which is focusing on New York broadcast stations that reach southern Connecticut, made an initial buy Friday of time on WCBS in New York for $331,670 to air the ads until Nov. 3, according to FCC records. The ad was produced by SKDKnickerbocker, the firm Malloy used in his 2010 race.

The ad by Giffords’ local affiliate, Common Sense Connecticut, speaks directly to parents. Never directly mentioning Newtown, it opens with a scene of a girl about the age of the Sandy Hook victims getting ready for school. The mother says, “Every day I wonder…is she safe?”

“I’m glad Dan Malloy fought to protect us and limit high-capacity magazines used in mass shootings that can kill so many, so quickly. It’s frightening. It’s frightening that Tom Foley opposed limits on magazines and would repeal gun safety laws.

“Foley protects the gun lobby. He should protect us, instead.”

Giffords’ group did not respond to requests for comments about where its ads will be shown, but political sources say they have been seen on cable systems in southern Connecticut. There is no record of the group buying time on broadcast stations in Connecticut.

The ad by the National Shooting Sports Foundation makes no mention of Foley and attacks Malloy as slandering the industry in an interview on CNN and threatening Connecticut jobs.

“What this is about is the ability of the gun industry to sell as many guns to as many people as possible, even if they are deranged, even if they are mentally ill, even if they have a criminal background,” Malloy says in the CNN clip. “They don’t care. They want to sell guns.”

“Not one bit of this is true,” the narrator says. “The governor has never apologized.”

A spokesman for the group says the ad is being shown on cable systems in Litchfield, Tolland, Windham and New London counties. The foundation also is airing radio ads.

Spending on the governor’s race by independent-expenditure groups now exceeds the $13 million that the publicly financed campaigns of Malloy and Foley will spend together on the general election.