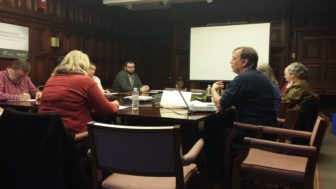 Faculty leaders of the Connecticut State Colleges & Universities: president’s plans will cause “enormous and negative consequences”

“Gargano was the voice of the stuff we believed in,” said Michael Shea, an English professor at Southern Connecticut State University, pointing to what the provost’s departure represents. “Our concerns have been dismissed.”

A spokesman for the system said Monday that the provost had resigned, but a number of the faculty Friday questioned whether he had been forced out.

Requests for an interview with Gray were denied.

The faculty comments came at a meeting in Hartford of the Faculty Advisory Committee, a group that advises the Regents, who govern the Connecticut State Colleges and Universities. The CSCU system consists of the four regional state universities, 12 community colleges and the online Charter Oak State College.

After requests for documents from The Mirror, spokesman Michael Kozlowski said, “I can tell you that Dr. Gargano did not submit a letter of resignation, nor is there a separation agreement in place.”

Kozlowski said that the provost did not lose access to his work email and computer before meeting Monday with the president, nor was he escorted by security from the building afterward.

‘A medium t-shirt for everyone’

On the heels of faculty unrest this week at Western and Eastern Connecticut state universities, the faculty advisory committee unanimously passed a resolution condemning Gray’s plans for the future of the system, knows as “Transform CSCU 2020.”

“After careful consideration of Transform CSCU 2020,” the resolution stated, “the [system’s Faculty Advisory Committee] finds that it lacks focus on academic excellence, consolidates our distinct missions, is so vague as to be meaningless and removes autonomy from local institutions in a manner that has enormous and negative consequences for the educational experiences for our students. In short, it is neither transformational nor aspirational. We cannot endorse Transform CSCU 2020 in its current form.”

Greg DeSantis of Housatonic Valley Community College summed up the criticism by saying, “They give us all a medium t-shirt and tell us all, ‘Put this on.’”

The 743 “milestones” outlined in the plans, prepared with the help of consultants from the Boston Consulting Group, are also insulting, the faculty said.

“They are trying to drown us in details… But it’s incredibly vague,” said Patricia O’Neill, a faculty member at Western Connecticut State University.

While the faculty leaders of the state’s four universities have already submitted an alternative plan, faculty leaders from the community colleges also decided Friday to prepare one they hope the Regents and state legislators will consider.

Sarah Greco, the leader of the system’s Student Advisory Committee, who attended the faculty meeting, told the faculty leaders that students also have major concerns with how the plan was developed.

Gray informed faculty Thursday that he would put off “for a minimum of two months” having the Board of Regents consider his plan, “in order to provide more time for input, discussion, consideration and revision of the Transform CSCU 2020 initiatives.”

The system spokesman said during an interview Friday that the system’s central staff is “disappointed in the fact that [faculty pushback] is occurring. What this means for us is we have to do a better job engaging and explaining” the initiatives.