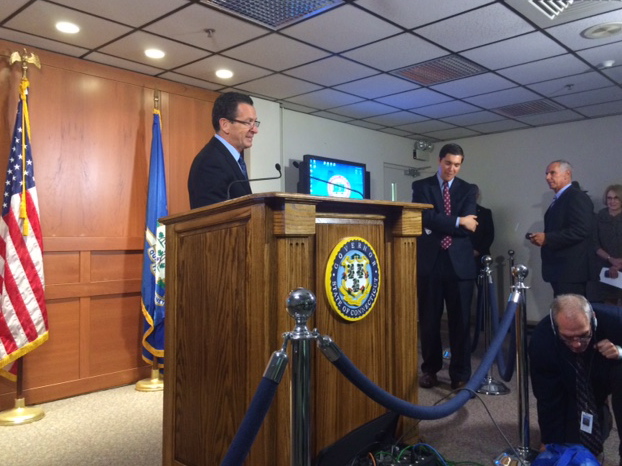 Gov. Dannel P. Malloy said Tuesday he was untroubled by the sudden rise of Gregory J. Hayes, who infamously denounced the Connecticut business climate to Wall Street investors in 2010, as the new chief executive of the state’s largest employer, United Technologies Corp.

Malloy said he spoke Monday to both Hayes and his predecessor, Louis Chenevert, who committed UTC earlier this year to investing $500 million in the state, primarily in a new headquarters and research facility on the East Hartford campus of its jet-engine subsidiary, Pratt & Whitney Aircraft.

“I had a nice conversation with both of them,” Malloy said. “Mr. Hayes pointed out that Connecticut’s their home and is going to be their home, and they’re making progress on finalizing the design for the Pratt & Whitney project that we’re partners in.”

In legislation passed in 2014, the state authorized up to $400 million in tax credits in return for UTC’s investment in the new Pratt & Whitney facilities and two other projects.

Hayes’ ascension does not represent a new view of the company’s place in Connecticut, Malloy said.

“Louis and he have been working closely together for many years,” Malloy said. “Both of them stressed that and feel very good about the company and the company’s position in Connecticut.”

The state’s relationship with UTC seemed to reach its nadir in March 2010, when Hayes, then the chief financial officer, told Wall Street analysts that Connecticut was too expensive a place to do business.

“Anyplace outside of Connecticut is low cost,” Hayes said. “Even if work has to stay in the U.S., there are opportunities to reduce cost by moving out of those high-cost locations.”

A year later, an unapologetic Hayes shared a stage with the newly elected Malloy and expressed surprise at the impact of his statement.

“It’s kind of like saying the sky is blue, and then everybody all of a sudden steps back and says, ‘Oh, my God, the sky is blue’,” Hayes said after a Hartford Courant Key Issues Forum on the economy at the University of Hartford on March 2, 2011.

Hayes said then that Connecticut remains a high-cost place to do business, along with many other states, but overall he was more upbeat, praising Malloy’s initial efforts to stabilize the state’s finances and improve its business climate.

“What the governor is doing is absolutely the right thing, and that is saying the state of Connecticut is open for business,” Hayes said. “And we’re going to support him in those efforts. We’re not going to agree on everything with the governor, but for the most part we think he’s on the right track.”

Malloy said Tuesday that Hayes’ new role was not seen as a setback in the state’s relationship with the conglomerate whose holdings include two major aerospace companies, Pratt & Whitney and Sikorsky Aircraft in Stratford.

“No, not at all,” Malloy said. “Our relationship is on a stronger footing than it has been probably in decades. I think everybody is stressing that.”

Malloy, who spoke at press conference on traffic safety and the coming pre-holiday storm, laughed at the thought that Hayes, until his emergence as the new leader of UTC, may have been best-known for his dour view of Connecticut as a place to do business.

“Until yesterday, that was the most famous utterance he ever had,” Malloy said. “There was a broken relationship between our largest private employer and the state of Connecticut, which quite frankly took years to repair. But we’ve repaired it, and we go forward from here.”