Rowland makes bid to avoid up to 37 months in prison 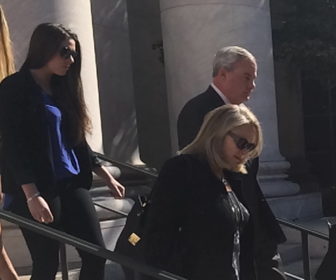 John G. Rowland departs with his wife, Patty, and a daughter after guilty verdict.

John G. Rowland is using testimonials from his daughters and stepson, wife and ex-wife, the minister who served as his radio co-host, and others in a bid to convince a federal judge to disregard a probation officer’s calculation that sentencing guidelines call for the former governor to be returned to prison for up to 37 months.

A sentencing memorandum filed Thursday by the defense says that the U.S. Probation Department has incorrectly calculated that Rowland should be sentenced next month to a minimum of 30 months and a maximum of 37 months in prison under federal sentencing guidelines.

Reid H. Weingarten, who represents Rowland, says in the memo to Senior Judge Janet Bond Arterton that the correct calculation is 18 months to 24 months, but that his client deserves a lesser sentence based on personal history and the nature of the campaign finance violation on which he was convicted in September.

“Mr. Rowland has lived a life of public service and civic engagement, has been a devoted husband and father, and has served as a mentor to many young adults. The numerous letters of support attached to this memorandum uniformly attest to Mr. Rowland’s integrity, generosity, and desire to help others – qualities that Mr. Rowland has evidenced throughout his life,” Weingarten wrote.

Rowland, 57, a former three-term congressman and three-term governor who served 10 months in prison a decade ago, was convicted in September on all counts arising from what the government described as a scheme to solicit two congressional campaigns to secretly pay him as a consultant in violation of campaign finance laws.

The government claimed during the trial that Rowland, whose resignation as governor and subsequent guilty plea to corruption charges in 2004 left him too tainted to be openly hired by any campaign, pitched Mark Greenberg on hiring him in 2009 for his 2010 campaign and Lisa Foley-Wilson in 2011 for her 2012 campaign.

Greenberg eventually rebuffed him. Wilson-Foley also concluded that hiring Rowland for her campaign was too dangerous. Instead, her husband, Brian Foley, signed Rowland to a $5,000-a-month consulting contract with his nursing home company, Apple Rehab. He was paid $35,000.

Foley and Wilson-Foley have pleaded guilty. Rowland was convicted of conspiring with them to hide what amounted to an illegal campaign contribution by Foley to his wife.

Weingarten, who has said Rowland will appeal his conviction, says in his memo that his client already was punished by the most recent prosecution and he poses no danger of causing further offense.

“Mr. Rowland’s alleged offenses, and the previous conduct to which he pleaded guilty in 2004, both involved politics. Mr. Rowland has always been drawn to politics, but understands that chapter of his life is over. Mr. Rowland has no intention to return to politics in any form in the future. And, as a practical matter, any return would be impossible now,” Weingarten wrote.

Arterton is scheduled to sentence Rowland on Jan. 7, the same day Gov. Dannel P. Malloy is to be inaugurated for a second term. Foley and Wilson-Foley are to be sentenced later in the month.

Weingarten told Arterton that others involved in the alleged conspiracy were not charged and that Foley and Wilson-Foley, who pleaded guilty to misdemeanors, face no more than a year in prison.

It would be unjust to sentence Rowland to 18 months or more, he wrote.

His wife and ex-wife told the judge that Rowland is an important source of support to his son, R.J., who returned from a tour with the Marines in Iraq with medical issues. Rowland’s oldest daughter, Kirsten, is to be married the weekend before his sentencing.

“At this moment I am racing to the altar so not to miss my Dad walking me down the aisle. He has come with me to try on dresses, picked my photographer and has come with me to pick out flowers, just as he would if we weren’t under these circumstances,” she told the judge. “My life has been anything but ordinary, but through the adversity I have been blessed with a supportive and loving father, I shudder to imagine a life without him. As a family we hold the hope that you issue him a fair and just sentencing.”

A sister-in-law says Rowland helps care for Patty’s elderly parents and his own mother, who suffers from dementia.

Pastor Will Marotti, who served as co-host with Rowland on WTIC-AM, asked the judge to consider “the whole man” as she imposes sentence.