Washington – The massive defense authorization bill that’s making its way through Congress is an early Christmas present for Connecticut’s defense contractors, containing billions of dollars for submarines, helicopters and other weaponry made by companies in the state.

But a special gift is the bill’s establishment of a “National Sea-Based Deterrence Fund” that would allow the Pentagon to put as much as $3.5 billion in a special account, outside the Navy’s normal shipbuilding budget.  It would pay for a new class of submarines that could be built by Electric Boat in Groton.

The special fund allows the Pentagon to pay for these expensive ships without appearing to bust the Navy shipbuilding budget.

The establishment of the fund is a tactic that hasn’t been used since the 1980s when former President Ronald Reagan created a similar way to pay for his “Star Wars” missile defense program.

The National Sea-Based Deterrence Fund would pay for submarines that would replace the Navy’s fleet of aging Ohio-class missile subs, built by Electric Boat. EB now hopes to win contracts for the replacements, which will be the most expensive submarines in the world.

This defense authorization bill, which passed the House Thursday, outlines the spending plan for all of the Pentagon’s programs, but the money to pay for them must actually be appropriated in a budget bill that is expected to be acted on by Congress next week.

The Ohio-class subs each hold up to 24 Trident nuclear missiles and were designed specifically for extended nuclear war-deterrence patrols. Each Ohio-class sub is provided with two complete crews, called the Blue crew and the Gold crew, and special hatches to speed repairs and minimize time at port. They are nearly constantly on patrol.

“The Ohio-class sub is the most important warship in the entire fleet because it is meant to deter a nuclear war,” said Loren Thompson, a defense analyst at the Lexington Institute.

The replacement submarines will still be the largest in the U.S. military – and cost about $5 billion each. The Virginia class attack submarine, which does not carry ballistic missiles, costs about $2.7 billion apiece. The Navy won’t send out any contracts for the new class for years.

The fate of the National Sea-Based Deterrence Fund was once in question because there was little support for it in the Senate. But it was included in the bill after negotiations between the House and Senate. The Senate will act on the bill next week.

The special fund was proposed by Rep. Randy Forbes, R-Va., who heads the seapower subcommittee of the House Armed Services Committee and whose district is home to Newport News Shipbuilding.

Rep. Joe Courtney, D-2nd District, whose district includes Electric Boat and Naval Submarine Base New London is also a long-time advocate of the plan. The New London base would be protected by another provision of the bill which prohibits funding another round of base closings.

Other submarines – and helicopters and planes

The defense bill would also authorize $5.9 billion to build two Virginia Class submarines and pay for the advance procurement of long-leadtime components for additional subs. 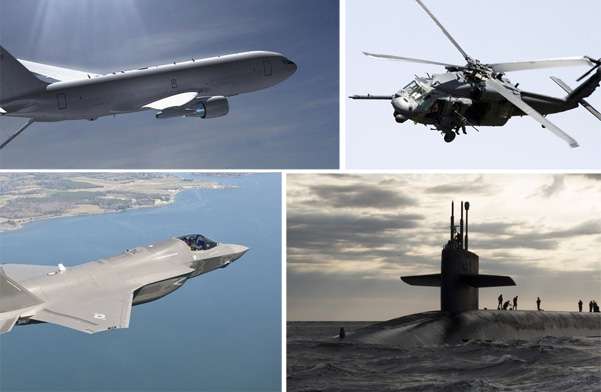 Some of the military aircraft and submarines that would be funded under the defense bill.

“This bill underscores our commitment to maintaining the best submarine fleet in the world, and strengthens our economy in eastern Connecticut,” Courtney said.

The defense bill would also approve spending $6.7 billion for procurement of 34 F-35 Joint Strike Fighters and $1.6 billion for research and development of the F-35, whose engines are built by Pratt & Whitney.

The bill would also authorize $1.6 billion to purchase seven KC-46 Pegasus tankers, whose engines are also made by Pratt & Whitney, and $777 million for research and development of the aircraft. The KC-46 will replace the current fleet of 1950s-era KC-135s.

Sikorsky will also benefit from the bill, which contains:

The defense bill also authorizes $130 million to upgrade the nation’s fleet of C-130 transport planes – eight of those planes are flown by the Connecticut National Guard – and $16.3 million for a facility at Bradley International Airport to maintain the guard’s C-130s.

Controversies in the bill

Although the bill was approved by the House by a bipartisan 300-119 vote, it did engender some controversies.

One is that the bill authorizes $500 million to pay for the training of Syrian rebels to help the United States fight the Islamic militant group known as ISIS.

Rep. Jim Himes, D-4th District, was among a group of lawmakers who tried to amend the bill to strip funding of the Syrian rebels, but GOP House leaders did not allow amendments to the bill.

“I continue to have profound concerns about the president’s plan to arm and train the so-called ‘moderate’ Syrian rebels,” Himes said. “The administration has not adequately explained how the United States will vet the rebels, what kinds of weapons we will give them and how we will make sure these weapons don’t fall into the hands of terrorists.”

Yet Himes joined nearly every other Connecticut House member, except Rep. Rosa DeLauro, D-3rd District, in voting for the bill. De Lauro said she opposed it because of the Syrian training provision.

Another controversy that is likely to bubble up next week in the Senate is the attachment of public lands provisions that would authorize the creation of dozens of new heritage areas and national parks, including a long-sought national historical park in Hartford’s Coltsville neighborhood to commemorate Samuel Colt’s contributions to American industry.

Some GOP lawmakers say the parks provisions do not belong in a defense bill. Others object to the creation of new parks as wasteful “pork.”

“The decision to attach an extreme land grab to the NDAA is a disservice to members of the Armed Forces,” said Sen. Ted Cruz, R-Texas, in a statement. “With the military’s shrinking budget, it is offensive that this bill would be used to fund congressional pork.”

The lands bill is also opposed by Sen. Tom Coburn, R-Okla. Either and any senator could use Senate procedural rules to derail consideration of the defense bill during the last days of the Congressional session next week, placing pressure on Senate leaders to strip out the lands package.