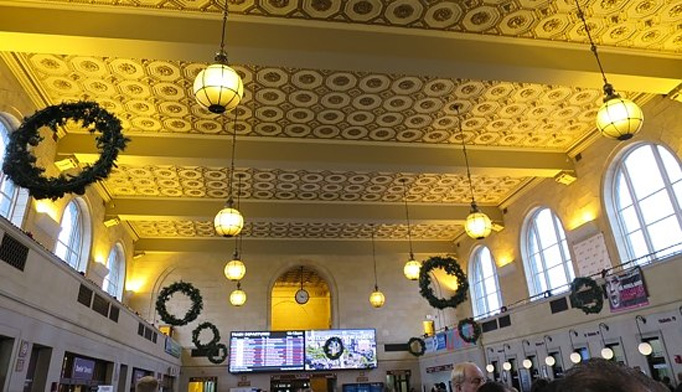 A U.S. Congressman bound for a train to Springfield paused to behold the golden view above his head inside the grand main waiting room at New Haven’s Union Station.

“I’m just blown away looking at that ceiling,” he said.

The Congressman, U.S. Rep. Richard Neal of Massachusetts, was speaking at a stopover press conference held Monday as he prepared to board the Amtrak train to Hartford, then Springfield. The reason for the press conference: to highlight the improvements coming to rail service thanks in part to federal dollars he helped secure along with New Haven U.S. Rep. Rosa DeLauro; and to look at what else can happen to boost the commuter rail.

A $365 million project is underway to upgrade Connecticut’s 62-mile rail corridor and enable Amtrak to run 16 of those trains New Haven-to-Hartford-to-Springfield each day, up from the current six. That project—which includes adding tracks and fixing bridges and culverts — is on track to be completed some time in late 2016, state transportation Commissioner James Redeker, who accompanied Neal, reported. He said about 45 percent of the money comes from the federal government, most of the rest from the state.

U.S. Rep. Rosa DeLauro (pictured in between U.S. Rep. Richard Neal at left and parking authority chief David Panagore at right) spoke of the importance of federal infrastructure spending in improving rail service, especially in the Northeast, which has the most crowded highways.

DeLauro spoke of the importance of federal infrastructure spending in improving rail service, especially in the Northeast, which has the most crowded highways.

“The engine for growth for our country is . . . infrastructure,” she said.

Neal, a former Springfield mayor, said he’d like to see his home city’s train station fixed up to match the breathtaking beauty of New Haven’s Union Station. “What you’ve done in New Haven is visionary,” he said, singling out not just the ceiling but the new arrival-departure board.

The view from New Haven is a bit different—officials have been pushing for years to make changes to improve the station.

A drawing of the proposed new parking garage..

Order number one: A second parking garage which would have first-floor retail and perhaps housing as part of a “transit-oriented development.” The state has promised, and failed to deliver, that second garage since the 1990s. The station’s 1,140-car garage fills up by 8:30 a.m., according to city Economic Development Administrator Matthew Nemerson. He said city and state officials will meet later this week about moving ahead the proposal—as Gov. Dannel P. Malloy promised would happen when he paid this election-season visit to the station in May, and which he had claimed a year earlier was about to start happening.

Also on the agenda of that meeting this week: a broader $5 to $6 million overhaul of the Union Station (including the second garage) aimed at making it not just a travel stop, but a new center for shopping, eating and hanging out. The plan envisions pushing the main station area out closer to the tracks, adding a dining area supported by new restaurants as well as upscale stores (Nemerson Monday spoke of a large bookstore), and placing tables on the elegant balcony to encourage waiting travelers to use it. Click here for a full story on that plan.

This story originally appeared in the New Haven Independent.