Once a talk-show punchline, busway almost ready to roll

It was a topic to avoid on the campaign trail, a $567 million punch line for much of his first term — “the busway to nowhere.” But now that he is re-elected and it’s nearing completion, Gov. Dannel P. Malloy is embracing the rebranded “CT fastrak.”

On a tour by bus Tuesday over the 9.4-mile off-road “guideway” from Hartford to New Britain, a relaxed Malloy said he thinks he and others associated with bringing bus rapid transit to Connecticut will have the last laugh.

“This would have been an easy thing for me to kill,” Malloy said of the long-gestating project, which he green-lighted five months after taking office. “But as I understood the project, I became firmly convinced that this was the way to go and the project to build – and that on a long-term basis, this would be a winner.”

Planning for the project originated under Gov. John G. Rowland, who as a radio talk-show host would ridicule it as “the magic bus,” a $60-million-a-mile ribbon of asphalt and concrete. Now, Rowland is off the air and facing a certain return to prison next month after a political corruption conviction.

On the tour, Michael Sanders of the Department of Transportation played guide, recounting in commentary over a PA system how the busway was the cheapest of three options considered to alleviate rush-hour traffic on I-84 west of Hartford. It was half the cost of rail and one-fifth the cost of widening the highway, if obtaining a wider right-of-way were even politically feasible.

“Who was the governor then?” Malloy called out from a bus carrying DOT Commissioner James P. Redeker, Hartford Mayor Pedro Segarra, legislators, other local officials and reporters.

Sanders noted that Malloy was preceded in office by two governors whose name began with that letter, Rowland and M. Jodi Rell, each of whom allowed planning on the project to go forward..

“And they were both for this project?” Malloy yelled out.

“At that time,” Sanders said, then adding in a lower voice, “That’s your editorial comment.”

Malloy took office as the first Democratic governor in a generation when the project needed a final go or no-go decision. It was one of the few major transportation projects shovel ready, but it had few defenders, other than hungry construction unions, a regional planning agency and a few business leaders. 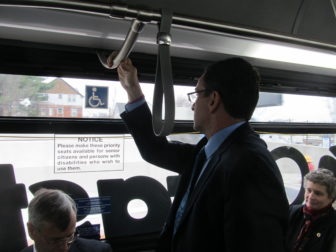 “I heard a lot of opposition to the project, which was sufficient to give me pause and make me do my own homework on it,” Malloy said. “I think there was a political question about it, but in my administration we hope there are bigger concerns that we base our judgment on.”

First, he said, he concluded that the project would be worthwhile, especially once it connected to an improved Springfield-to-Hartford-to-New Haven rail system now under way.

It was a source of jobs for a sector of the labor market with unemployment topping 40 percent. And it would shape his relationship with the federal Department of Transportation, which was providing about $450 million.

Malloy said Connecticut would have had to turn back the money if he scuttled the project, as Florida did when Gov. Rick Scott canceled a high-speed rail line (a decision that ultimately sent about $250 million from Florida to Connecticut for its rail improvements).

“There were a lot of reasons for the decision I made,” Malloy said.

CT fastrak opens in the next three or four months. It will offer rapid transit service on buses that will arrive less than 10 minutes apart during rush hour at 11 stations between Union Station in Hartford and downtown New Britain.

One of the stations is adjacent to a major employer, Aetna, in Hartford. The bus from New Britain will exit the guideway and make a downtown loop, with stops near The Travelers and United Technologies Corp.

The 9.4-mile guideway is the trunk of a broader system. Some buses will exit the guideway on local routes to destinations such as Central Connecticut State University in New Britain, the University of Connecticut Health Center in Farmington and WestFarms Mall.

Express commuter buses from Waterbury and Bristol will exit I-84 and take the off-road guideway into Hartford, bypassing the morning congestion west of the city.

On a stop in Newington, the town manager, John Salomone, smiled and pointed to a vacant lot, once home to an industrial welding company. It’s now being cleaned of pollution as a brownfield site.

“I want to show you what’s not here any more,” Salomone told the governor. “It’s totally razed. We did it under budget.”

The four-acre parcel adjoins an eight-acre site already under development. Salomone said Newington is ready to the market the land for transit-oriented development. 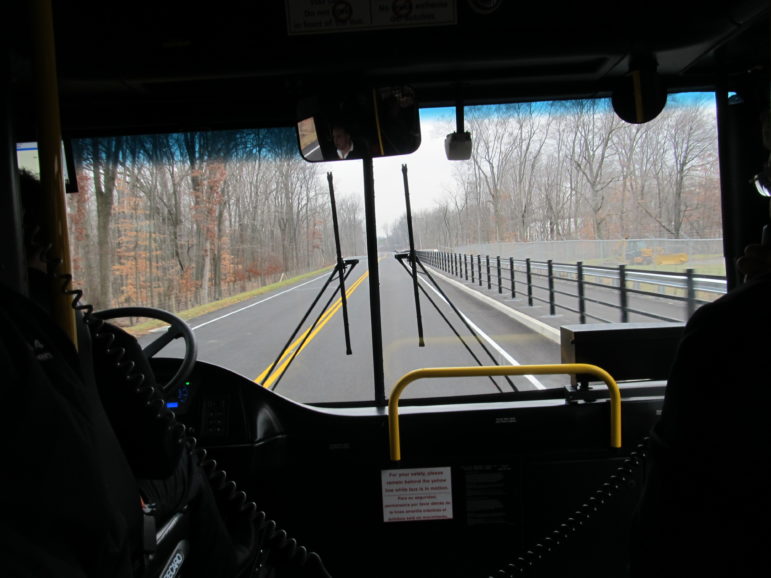 On the busway through Newington. At right is a five-mile bike and walking trail.