Malloy outlines transit goals, puts off cost for another day 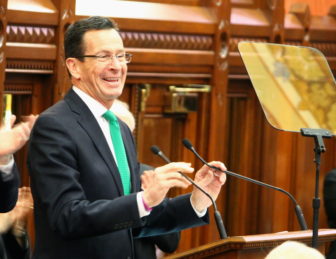 Gov. Dannel P. Malloy gives his State of the State speech at the state Capitol.

Gov. Dannel P. Malloy opened his second term Wednesday with a warning of a sclerotic Connecticut whose economy and quality of life are threatened by crumbling and clogged highways and inadequate and underfunded mass transit.

In a drive-time State of the State Address, Malloy broadly hinted he will seek new revenues to finance overdue transportation improvements, saying gasoline taxes are not sufficient to maintain existing infrastructure, much less expand the capacity of the state’s highways and transit systems.

He never got to “the ask,” the pitch for money. That is for another day, after Malloy begins what says will be a conversation with the state’s taxpayers and its political and business leadership. He knows he must first make a case to a skeptical public that new revenue will not be diverted.

“Today, I am proposing that Connecticut create a secure transportation lockbox that will ensure every single dollar raised for transportation is spent on transportation, now and into the future,” Malloy told the joint session of the General Assembly. “No gimmicks! No gimmicks and no diversions.”

He is prepared to rely on Wall Street to be the enforcer.

Knowing that any law can be amended, Malloy said the administration will use bond covenants – the conditions attached to borrowing on the bond market – to ensure that transportation revenues will not be siphoned off.

The speech was the opening of a new campaign.

Malloy will hold a press conference Thursday in Meriden with Transportation Commissioner James P. Redeker to talk about projects in the city, an opportunity to expand on Wednesday’s message. Before Malloy delivered his speech, the administration already had teed up quotes from business, union and environmental leaders that read like upbeat movie blurbs. 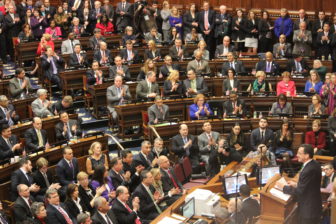 Malloy at the podium in the House chamber at the Capitol.

“We know that transportation and economic growth are bound together. States that make long-term investments in their infrastructure can have vibrant economies for generations. States that don’t, will struggle. It is that simple,” Malloy said.

The governor said he will detail the scope of potential projects next month, but he mentioned the widening of I-95, new train stations and expanded service into the Naugatuck as “a good place to start.”

Republican legislators generally applauded the Democratic governor for his vision, even if they expressed skepticism about the details that are to come on fiscal safeguards.

“The problem is you cannot bind the hands of legislators in the future,” he said. “So we really need more than that.”

Sen. Rob Kane, R-Watertown, the ranking Republican on the Appropriations Committee, suggested that the Democratic governor would have a credibility deficit with the GOP as a lockbox architect.

“In this administration, close to $500 million has been moved from the special transportation fund,” Kane said. “When he says lockbox, it’s because he’s the biggest offender of it. So that’s an admission of guilt in my eyes.”

Rep. Antonio Guerrera, D-Rocky Hill, the co-chairman of the Transportation Committee, said the state needs a protected source of transportation funding, since it can no longer rely on the federal government to fund infrastructure projects and gas tax revenues are expected to fall as cars become more fuel-efficient.

The governor insisted a legal “lockbox” must ensure “every single dollar raised for transportation is spent on transportation, now and in the future.”

But GOP leaders noted that the transportation fund not only relies on fuel taxes, but also upon about $80 million in annual sales tax receipts and a $150 million-per-year subsidy from the general fund.

If tolls or another gasoline tax hike is to go forward, all resources currently sent to transportation must be locked down – not just the high-profile sources, Republicans said.

“Investment in transportation is not the issue,” said House Minority Leader Themis Klarides, R-Derby. She said her caucus has long supported an enhanced transportation network. “It’s where the money is going to come from. It can’t be this shell game of moving the money around.”

Democrats applauded the ambition, even if they do not yet know exactly what they will be asked to approve. The governor mentioned a broad list of needs.

“I think this is the year of going big,” said House Speaker J. Brendan Sharkey, D-Hamden. 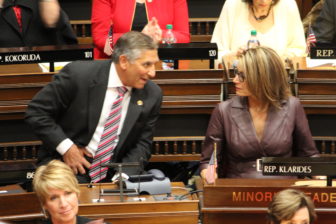 “It was a major, far-reaching, ambitious initiative,” said Senate President Pro Tem Martin M. Looney of New Haven. “It was typical of the governor’s leadership.”

“I think it was important that he acknowledged the legislature has been a partner with him,” Senate Majority Leader Robert Duff, D-Norwalk, said, predicting lawmakers would rise to the governor’s challenge to tackle transportation.

One lighter measure of the political importance of traffic to Duff, whose Fairfield County constituents suffer the state’s worst traffic congestion, is his Twitter feed: It routinely includes warnings of accidents on I-95.

The state’s chief business lobby offered a supportive canned quote for the governor’s pitch, but the group’s president said in an interview that Malloy must convince taxpayers that any new revenues truly will go to transportation.

Joseph F. Brennan, president of the Connecticut Business and Industry Association, said taxpayers have watched over the past decade as more than $1 billion in fuel tax receipts has been spent on non-transportation programs. But Brennan also said he feels optimistic given Malloy’s address.

The governor said the cost of inaction would be high.

“All told roads and bridges that are either deficient or overly congested cost Connecticut drivers a total of $4.2 billion annually,” he said. “It’s harming us and the health of our children with additional air pollution and smog. Simply put, our investments have not kept pace with our needs, and our residents and businesses are paying the price.”

He absolved his first term, insisting he has been better for transportation than any governor since William A. O’Neill, who launched a crash-spending program on highways and bridges after the collapse of a bridge carrying I-95 across the Mianus River in Greenwich.

“We’ve taken action on long-overdue projects like widening I-84 in Waterbury, replacing the Walk Bridge in Norwalk, and adding new tracks and signal systems between New Haven and Hartford. All told, we’ve invested more in transportation than any time dating back to Governor O’Neill. It’s more progress than Connecticut has made in decades,” he said. “But here’s the problem: it’s still not enough. We have so much more to do.”

Malloy tried to cast the need for what could be billions in new long-term spending in household terms. He said congestion keeps every resident, on average, on the road for an extra 42 hours a year.

“And for our economy, it’s the equivalent of $97 million in lost time and wasted fuel, each and every day,” he said.