Malloy trying to spare towns from cuts, but makes no promises 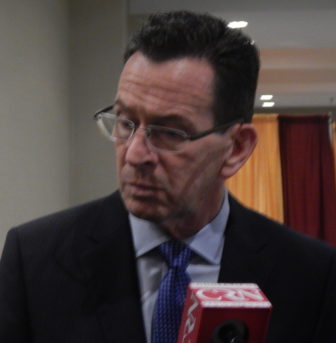 Cromwell – After four years of assuring cities and towns they would be spared from the state budget axe, Gov. Dannel P. Malloy brought a different message Tuesday to municipal leaders.

I’m doing my best, but no promises.

And while the governor was speaking cautiously before the Connecticut Council of Small Towns, local leaders were gearing up for a tough fight at the Capitol this year.

“We have to wrestle with the budget,” Malloy told COST members gathered for their annual legislative conference at the Crown Plaza Hotel and Conference Center. “I hope that we’ll have a budget that we can all live and prosper with.”

The governor, who served 14 years as Stamford mayor through 2009, tried to reassure local leaders by reminding them, “I’ve been in the seat that you’re all sitting in. I consider you a partner and that drives our deliberations.”

But the governor, whose next biennial budget proposal is due Feb. 18 to the General Assembly, is grappling with projected shortfalls of $1.3 billion next fiscal year and $1.5 billion in 2016-17.

And while Malloy insisted on the campaign trail last fall that the next deficit could be managed relatively easily, he conceded to local leaders Tuesday that state revenues have not grown as quickly as he had hoped.

Still, the Connecticut Conference of Municipalities took out an advertisement earlier this year on Internet news sites reminding Malloy that he had pledged to hold local towns harmless.

And Wilton First Selectman Leo Carroll pressed Malloy to clarify why the projected shortfall was a problem now, given that local leaders heard much more talk about a growing state budget reserve during last fall’s campaign.

Malloy largely retreated from the question, but he did cite his efforts to ramp up payments into the state employees’ pension fund.

But while those are growing significantly next year, by about $174 million, that represents less than one-seventh of the projected deficit next year.

Malloy was more definitive in ruling out any increases in local aid. “Don’t make any new commitments. I’ll tell you that,” he said.

The governor also warned local leaders that they could expect to be asked to work harder to regionalize services to cut local costs.

“You all should be doing things together that you are not currently doing together,” he said, adding that such consolidations could be “a big part of how we all make it through a long period of slow growth.”

Coventry Town Manager John Elsesser, who is COST president, urged members to prepare for a tough fight this spring to preserve funds for towns.

“We need to recognize real problems and be part of real solutions,” he said, cautioning members against apathy. “…At our meetings, if five or 10 people show up it is almost a riot.”

Elsesser added that, “We can’t just have COST stand for ‘Council of Stopping Things’.”

The governor also made a strong pitch Tuesday for the new transportation investments he is expected to propose on Feb. 18.

Connecticut’s aging, clogged transportation system has weakened the state’s economy because of decades of under-funding, he said.

A better transportation system and a more robust economy would attract more businesses to Connecticut, he said, “growing our grand lists, making it easier for people to stay in your communities.”