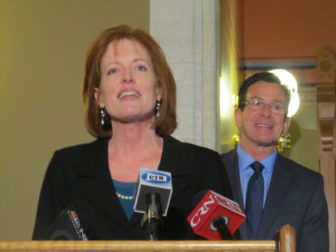 Morna Murray, a social-services advocate and public-policy expert on the state and national levels, was named Monday by Gov. Dannel P. Malloy as the next commissioner of the state Department of Developmental Services.

Murray, 54, of Glastonbury, is the chief executive of the Connecticut Community Providers Association. A lawyer, she previously was senior counsel to U.S. Sen. Robert P. Casey Jr. of Pennsylvania and worked for the Children’s Defense Fund.

As commissioner, she will oversee a department that serves more than 19,000 children and adults with intellectual disabilities and is managing the long and politically delicate transition from institutional to community-based care.

Murray, whose most recent job cast her as an advocate for community-based care, is set to take office as parents of residents at the Southbury Training School, the last of the major institutions housing hundreds of persons with intellectual disabilities, are split over its future.

“That’s going to be one of my top priorities,” Murray said.

She said the governor has asked her for recommendations on whether the transition to community-based can be accelerated.

“It’s something to be managed. It is an expensive facility,” Malloy said. “On the other hand, it has afforded some wonderful people opportunities, people who were cared for there and as an employment base. So we’re trying to find the right balance, and I believe the new commissioner when she starts will be spending a fair amount of tome on that issue as well as other issues.”

Murray also is taking office as the Malloy administration is finalizing an austerity budget proposal.

David Pickus, the president of SEIU 1199 New England, which represents employees at Southbury and in public and private group homes, offered congratulations, tempered by a warning of budget conflicts that may lie ahead.

“It is our hope that by working together we are able to find real solutions for DD funding and services for all providers.  There are many challenges ahead with over 2,000 individuals on the department’s waiting list and workers’ salaries stagnant for seven years.  We look forward to helping find a solution to these important issues,” Pickus said.

Murray comes to the field with a personal interest: an adult son has dyspraxia, a disorder that can make it difficult to coordinate and plan physical movement or speech. Murray said that “does give me a special affinity for this field.”

“In our family, we like an old saying, ‘Normal is just a setting on a washing machine,’ ” she said.

Her nomination is subject to confirmation by the General Assembly. If confirmed, she will succeed Terrence Macy, who left the position in January. Malloy praised Macy for expanding the department’s services to families of children with autism.