The bill would ban large-capacity ammunition magazines for everyone but military members and law enforcement officers. It was introduced by Rep. Elizabeth Esty, D-5th District, in the House and Sen. Bob Menendez, D-N.J., in the Senate.

The bill’s proponents characterized the legislation as a needed safety measure, like seat belts or airbags, that would save lives, not only those threatened by a mass murderer, but also police who are often outgunned by criminals.

“This year is the first year in U.S. history that gun deaths will exceed car deaths,” Esty said. “We should be ashamed.”

Eight states, including Connecticut and the District of Columbia, ban high-capacity magazines. But congressional Republicans have resisted efforts for a federal ban, and for any new federal gun restrictions. 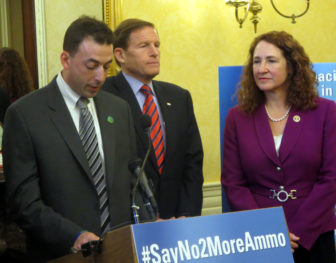 Dave Stowe, vice chairman of the Newtown Action Alliance and the Newtown Foundation, insisted there should be bipartisan support for the bill, saying, “What I see is an issue that does not take sides.”

After shooter Adam Lanza killed 20 schoolchildren and six adults at Sandy Hook Elementary school, similar legislation was introduced by Rep. Carolyn McCarthy, D-N.Y., in the last Congress. McCarthy was elected to the House or Representatives after her husband was killed and son severely injured by a gunman on a commuter train.

Still, supporters of the ammunition bill, which would limit magazines to 10 rounds, are hopeful public opinion sways GOP lawmakers.

“Today we are renewing our call on Congress to listen, to listen to the advocates from Newtown, the advocates of those who have lost loved ones around the country, in Harlem, in Chicago, in Aurora, across the country, and to abide to the will of the American people,” Esty said. “And to pass common-sense gun safety reforms.”

The logo for the #SayNo2MoreAmmo campaign.

They say seconds count when a gunman threatens. As examples, they point to the 11 Sandy Hook school children who were able to run from danger while Lanza reloaded his gun and others who were saved when a gunman in Tucson, Ariz., was overpowered while reloading.

At a press conference in the U.S. Capitol to introduce the legislation, Sen. Richard Blumenthal, D-Conn., said, “We may never stop all the killers, but we can make them less lethal.” Sen. Chris Murphy , D-Conn., also attended the event.

Advocates of the legislation also argued huge ammunition magazines are not needed for hunting and sport shooting.

“No self-respecting hunter uses a 30-round magazine,” Blumenthal said.

Meanwhile, the National Rifle Association says magazines that hold more than 10 rounds are designed specifically for self-defense and preferred by millions of Americans for that purpose.

The NRA also says that in the “vast majority of high-profile shootings of the type that gun control supporters pretend would be prevented by a magazine limit, perpetrators have not been ‘taken down’ by victims or bystanders when attempting to reload.”

The gun rights group points to the “worst mass shooting in American history – at Virginia Tech in 2007,” where the shooter used 10-round and 15-round magazines to fire 174 rounds, “requiring numerous reloads not interrupted by his would-be victims.”

Stowe and fellow Newtown Action Alliance member Tom Campbell are in Washington this week trying to counter the NRA’s influence.

They are meeting with as many of the 60 new members of Congress as they can, and delivering information about the ammunition legislation and other efforts to all of the lawmakers’ offices. Stowe said they visited with about 14 freshmen lawmakers.

“We did not make much headway with Republicans, but we’re still knocking on doors,” Campbell said.

The advocates have an uphill climb in this Congress, where both chambers are controlled by the GOP.

Even in the last Congress, a Democratic-controlled Senate failed to muster 60 votes needed to move toward a vote on a bill that would extend FBI background checks of gun purchasers and outlaw “straw” purchasers, in which an individual purchases a gun for a felon or anyone else who is banned from owning firearms.

Blumenthal said the decision was made to introduce the ammunition bill first, but the background-check legislation will also be reintroduced in this Congress.