Legislators were more interested Tuesday in praising Commissioner Dora B. Schriro’s leadership of the Connecticut State Police than in challenging her about controversies during her previous job overseeing New York City’s troubled jail complex at Rikers Island.

The Executive and Legislative Nominations Committee voted 5 to 3 to recommend Schriro’s confirmation by the House of Representatives for a full four-year term as Democratic Gov. Dannel P. Malloy’s commissioner of emergency services and public protection.

Schriro, 64, was named in January 2014 as the first woman to oversee public safety functions in Connecticut. In August, long after her first confirmation hearing, the U.S. Attorney in Manhattan issued a scathing assessment of how adolescents were treated by the jail system during her tenure.

“I think it speaks to a person’s character,” Kane said.

Schriro was not implicated in falsifying data, but she was accused of ordering that a report sent to federal authorities omit any suggestion that a warden and deputy warden were culpable.

After the governor began a second term in January, all commissioners staying were subject to a new confirmation hearing, giving legislators an opportunity to quiz Schriro about reports unavailable when she first appeared before the Executive and Legislative Nominations Committee.

Kane and Senate Minority Leader Len Fasano, R-North Haven, who is not a member of the panel, met privately Monday with Schriro to review the U.S. attorney’s report and press reports. 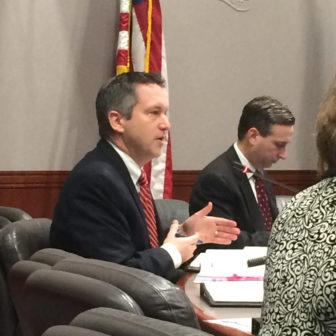 On Tuesday, she told committee members she was proud of her tenure in New York, where she says she implemented changes that reduced violence, including adding 2,000 cameras to a video surveillance network.

“It was and continues to be one of the most challenging places to serve,” she said.

Rep. Cecilia Buck-Taylor, R-New Milford, asked Schriro what grade she would give herself in New York.

“Certainly an A for effort,” Schriro said. “As for the rest, I’ll let the record speak for itself.”

Kane, Buck-Taylor and Rep. Jason D. Perillo, R-Shelton, all questioned Schriro about New York, but the other committee members focused on her 13 months as commissioner of emergency services and public protection.

To legislators with rural districts, Schriro is the commissioner who made a problem go away: She reversed her predecessor’s decision to consolidate dispatching centers, which resulted in the nighttime closures of some state police troops.

“Thank you for getting Troop A on a 24-hour basis,” said Rep. Janice R. Giegler, R-Danbury. “That was crucial to our area.”

Sen. Joan Hartley, D-Waterbury, complimented Schriro for meeting extensively with troopers, improving the morale of rank-and-file troopers who had complained that communications with the top ranks had broken down.

Buck-Taylor, who voted against confirmation in committee, said she may ultimately vote for Schriro when her confirmation comes before the House. Executive nominations are confirmed by only one house of the General Assembly.

Perillo and Rep. Fred Camillo, R-Greenwich, also voted against recommending confirmation. Kane could not vote. Since Schriro’s confirmation was assigned to the House, only House members on the joint committee could vote on a recommendation.

Andrew Matthews, the president of the Connecticut State Police Union, attended the hearing to show the union’s support for her confirmation.