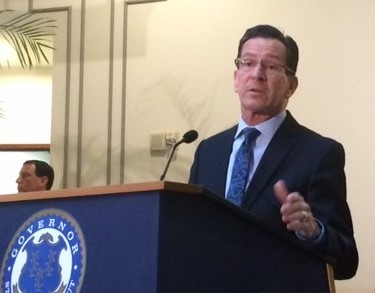 Gov. Dannel P. Malloy is proposing legislation to block businesses from forbidding employees to disclose their wages – a move the governor said is crucial to promote pay equity.

The governor’s proposal Thursday earned a quick endorsement from the state’s Permanent Commission on the Status of Women, whose director said “pay secrecy is fatal to pay equity.”

Malloy’s proposal, which is expected to be introduced by legislative leaders on his behalf, does not require employers or employees to disclose wages. But it stipulates workers are free to discuss them and also prohibits businesses from punishing staffers who inquire about another’s wages.

“This is a step toward ensuring equal pay for equal work, because equality on this issue is long overdue,” the governor said. “Pay secrecy practices ultimately encourage discrimination and perpetuate the gender wage gap. Women deserve the same pay for the same work – and that’s why we’re standing up for real action on this issue.”

Malloy cited a 2010 report by the Institute for Women’s Policy Research that showed about half of all workers nationally reported that discussion of their wage or salary information was either prohibited or discouraged.

The governor created the state Gender Wage Gap Task Force in 2013, and that panel identified “pay secrecy” as a factor in slower compensation growth among women workers.

Department of Labor Commissioner Sharon Palmer, who co-chairs the task force, said women compose 47 percent of the state’s workforce. “Pay fairness is key if we want to provide a better quality of life for our citizens and the generations that follow.”

The Connecticut Business and Industry Association said it would review the administration’s proposal closely once the bill is introduced.

“Unless women are free to discuss their salaries – if they so choose – without fear of retaliation, it’s nearly impossible to bring gender-based discrimination to light.”

Sen. Cathy Osten, D-Sprague, co-chairwoman of the legislature’s Labor and Public Employees Committee, said she supports the concept behind the governor’s bill.

Osten said she believes some companies have required employees to sign agreements that forbid disclosure or discussion of worker compensation.

“I think this could provide some transparency so that people who provide like work are getting like pay,” she said. “Women tend not to know what the pay schedule is in private businesses.”