Opting not to deliver the largest tax cut he campaigned on last year, Gov. Dannel P. Malloy tried to shift the conversation Sunday with a proposal to whittle down the sales tax rate. 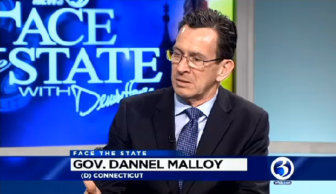 But while the middle-income relief the governor pitched is worth $70 million next fiscal year, tucked into that plan is the cancellation of a sales tax exemption on clothing worth twice as much.

The Democratic governor says his proposal is about helping the middle class. The Republican Senate leader charges it is misdirection to hide that the state’s fiscal woes are far worse than the governor portrayed on the campaign trail last year.

In an interview aired Sunday on WFSB’s “Face The State,” Malloy trumpeted a new plan to whittle 1/14th off the sales tax rate over two years.

“I think it’s a way to give some relief to the middle class as the economy keeps improving,” Malloy said.

Unfortunately, that’s when state finances face a huge, built-in hole of $1.3 billion – a problem nonpartisan analysts have noted since last May.

Despite that warning, Malloy approved $220 million in tax cuts – all slated to begin in 2015, after the election.

Chief among them was restoration of the sales tax exemption on clothing costing less than $50. This break, starting July 1, would have saved consumers $145 million per year.

The governor said Sunday lowering the sales tax rate would mean ending some exemptions. And while full details of the plan weren’t released Sunday, his staff confirmed afterward that the clothing exemption would be among those canceled.

“This governor holds up something shiny to get people to go along with it,” said Senate Minority Leader Len Fasano, R-North Branford. “But it is all an illusion.”

Malloy had high praise for that clothing exemption when he proposed its restoration two years ago as crucial relief for middle-income families.

“It can still mean something to families working hard to make ends meet,” Malloy said in his budget address. “Let’s make it happen. Let’s provide direct, tangible, tax relief, relief for the working people of Connecticut – relief they will feel.”

When pressed, the administration conceded Sunday that the net effect of the governor’s plan – including lowering the rate and canceling the clothing exemption – would be for the state to collect an extra $68 million in sales taxes above what it otherwise would next fiscal year.

But the administration also argued the governor’s plan would help the middle class starting two years down the road.

In the 2016-17 fiscal year, Malloy officials say, the sales tax rate would drop to 5.95 percent. And even given the clothing exemption’s cancellation, the state would collect $12 million less than originally expected that year.

But what are the chances that the second reduction in the sales tax will happen?

State finances face an even larger deficit, topping $1.4 billion, that year. And Malloy’s track record when it comes to delivering promised tax cuts is spotty at best, even before considering the clothing exemption.

“This is a governor who continues to promise tax relief in the future, but when the time comes he pulls it away from the Connecticut people,” said Fasano. “Malloy is replacing one promise he can’t keep with another.”