Will Malloy’s new budget add up to a tax increase? 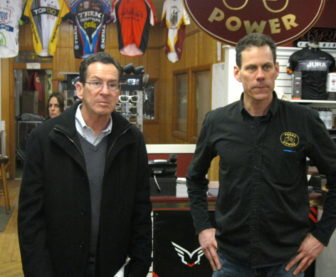 Middletown – While Gov. Dannel P. Malloy pitched his sales tax plan Monday as middle-class relief, he withheld details that would show whether his new budget would increase state taxes overall.

The governor wants to reduce the sales tax rate, which, by itself, would cost the state money. But at the same time, he wants to alter sales and business tax rules, which would allow the government to collect more.

The business tax changes remain the big unknown. How much in extra business taxes might be collected by making rule changes?

“You’ll get the rest of that in the next couple of days,” Malloy told reporters after a walking tour of Main Street businesses. The governor must present his budget proposal for the next two fiscal years on Wednesday to the General Assembly.

“There is a reality (that) this is a tough budget,” he added. “No one is sugar-coating that.”

But is the governor, who campaigned on a pledge not to raise taxes, breaking his word?

Malloy insists he is not. But the proof rests with a delicate balancing act between the pluses and minuses of the changes he will propose. And an analysis of what he has revealed — which only involves the sales tax — shows consumers already waiting several years to get much relief.

But the other sales tax changes Malloy wants would save the state $146 million per year. Chief among them is cancellation of the sales tax exemption on clothing costing less than $50, a former consumer perk that is supposed to resume on July 1.

Those sales tax changes combined leave the state $70 million ahead in tax receipts next year, with the government and taxpayers essentially breaking even in 2016-17.

By the 2017-18 fiscal year, the third of Malloy’s new term, consumers finally get a bigger net gain, up about $150 million. But the governor also has struggled with deficits since he took office in 2011, and much of the tax relief he promised previously was canceled because of fiscal problems.

The governor tried to emphasize Monday that his focus on tax relief right now, given the limited resources available to him, “has to be middle-class-centric.”

But last May, when nonpartisan analysts were projecting the same post-election fiscal woes that they are reporting now, the governor was adamant that no taxes would rise after the election.

“I gave at the office,” he quipped, implying that the $1.8 billion in tax hikes he signed to close a big deficit in 2011 were sufficient.

But since next year’s projected deficit – $1.3 billion – is the same as it was when Malloy took his no-tax-hike pledge, the Connecticut Business and Industry Association wants to know what business tax changes the governor is seeking.

“We’ve got a pretty clear message form our members that they want to see us improve Connecticut’s economic competitiveness,” CBIA President Joseph F. Brennan said, adding that state taxes are part of the problem. “One of the things holding us back is the overall cost of doing business in Connecticut.”