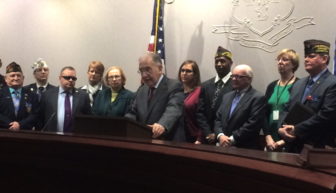 “In terms of the inequities in our society, this is the least we should be doing for our veterans,” said Senate President Pro Tem Martin M. Looney, D-New Haven, who outlined the proposal at a press conference with veterans and other senators.

The Senate Democrats would exempt 100 percent of veterans’ military retirement pay from the state income tax, matching a benefit offered in the neighboring states of Massachusetts and New York. Connecticut now offers a 50-percent exemption.

“I think it’s critical for Connecticut to be more competitive when it comes to keeping retired persons in our state,” said Sen. Mae M. Flexer of Killingly, the co-chair of the Veterans’ Affairs Committee.

Connecticut has 270,000 veterans, but only 11,000 collect military retirement pay. Many live in eastern Connecticut, home of the Naval Submarine Base New London.

The question inevitably arose: Can the state afford a tax cut of any kind?

“I think we can and should, because this is a relatively small amount,” Looney said.

Malloy already has announced his intention to propose cutting the sales tax from 6.35 percent to 6.2 percent. But he would extend the tax to items now exempt or slated to become exempt, resulting in a net revenue increase in the coming fiscal year.

Looney said the release of the governor’s budget is the start of a negotiation.

“I think we will inevitably make some tax adjustments. The governor’s suggested some. We’ll be suggesting others. Tomorrow, when the governor gives us his presentation, that begins our process. And we have the two-month committee process,” Looney said. “What we begin with tomorrow is the beginning of the negotiation that will go on for two more months.”

Looney and Flexer were joined by Senate Majority Leader Bob Duff of Norwalk and Sens. Tim Larson of East Hartford, Terry Gerratana of New Britain, Joe Crisco of Woodbridge, Cathy A. Osten of Sprague and Gayle Slossberg of Milford.

“When we stand up as a caucus like this, this is clearly a priority for us,” Slossberg said.

Looney said his overall message to his caucus, however, is that anything that costs money this year will have a difficult time winning passage.

“I think the basic message is to try to be realistic and to make sure there is a very significant public policy argument to be made in support of anything that will have an additional cost to it,” Looney said.

Malloy, who raised taxes by more than $1.5 billion in his first budget to help close an inherited shortfall of $3.6 billion in 2011, promised during his re-election campaign last fall that he would not raise taxes.