Malloy’s budget message focuses all eyes on the road ahead 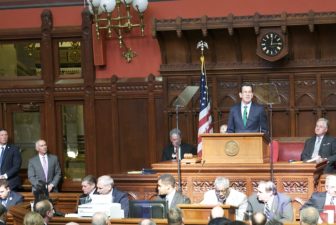 Gov. Dannel P. Malloy barely acknowledged the consequences of cutting services and delaying promised tax cuts Wednesday, instead portraying his austerity budget as a brief detour on the road to prosperity and educational, criminal-justice and transportation reforms.

The governor’s televised budget speech to the General Assembly reflected an imperative of political messaging that Malloy has long embraced as a candidate and officeholder: Keep moving forward, forever defining the agenda in the hopes the press, public and political establishment will follow.

Malloy, a Democrat who overcame dismal job-approval ratings to win re-election last fall, framed the first budget proposal of his second term as a setting of new priorities and ambitions for coming generations, most notably a massive transportation program and an effort to create a “second-chance society” for ex-offenders.

He just didn’t linger over them.

Malloy did not detail the tax changes that will costs businesses hundreds of millions of dollars, the delay in increasing the earned-income tax credit for the working poor, or the spending cuts his budget chief acknowledged will impose hardship on some of the state’s most fragile citizens. He spoke only generally.

“The vast majority of these cuts are choices that, under ideal circumstances, Connecticut would not have to make. But as our economy continues to recover, tough choices are needed if we want to achieve the following simple goals,” Malloy said.

He described those goals as balancing the budget, keeping the state’s commitment to public education and its promise to not financially burden cities and towns, all while avoiding further tax burdens on the middle class. Not surprisingly, Malloy set a standard his budget can meet.

The governor did not mention that his second-chance initiative entails a reorganization that would shift well-regarded re-entry programs for ex-offenders from the judicial system to the Department of Correction and a much-criticized Department of Children and Families. Even as he spoke, Supreme Court Justice Chase T. Rogers issued an unusually sharp denunciation of the reorganization, which would move 1,500 employees.

The only tax change highlighted in the speech was a reduction in the sales tax rate from 6.35 percent to 6.20 percent in November and then to 5.95 percent in April 2017.

“We can pay for it by simplifying our tax code, removing some exemptions, and by reining in loopholes and corporate tax credits,” Malloy said. “The hard-working members of our middle class have helped turn our economy around. They’ve pitched in and shared in the sacrifice. Let’s give them something back.”

He signaled he was done, not that he ever began, debating whether a budget that heavily relies on increased tax receipts violates a campaign promise not to raise taxes.

And he gave legislators plenty of new material to digest.

Malloy’s speech explored in exhaustive detail his vision for how he would like to see a wider I-84 near Danbury and I-95, especially in the most congested section from Greenwich to Bridgeport. He mentioned major projects in eastern Connecticut and Hartford, including replacing the I-84 viaduct.

The costs outlined in materials released by the governor’s office are staggering: $31 billion for highways, $36 billion for bridges, $22 billion for rail and lesser amounts for buses, ports and aviation. The total tops $100 billion.

Malloy offered no method to pay for his sweeping transportation ambitions beyond the first years of a 30-year project. Instead, he will ask a non-partisan commission to find an answer.

“They will have a single, narrow goal: offering recommendations for a sustainable structure to fund transportation over the next 30 years and beyond,” Malloy said.

The governor said everyone will play a role: “My friends, in the weeks and months ahead, we have some big questions to answer together.”