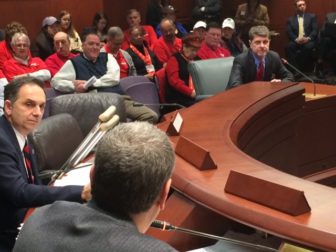 Dan Allegretti of Constellation Energy, at right, testifying before the Energy and Technology Committee.

The about-face is a tacit admission that a 2014 consumer protection law was insufficient to protect customers against bait-and-switch marketing by some of the electric retailers who compete with United Illuminating and Connecticut Light & Power, now part of a new entity named Eversource Energy.

“What we’re hearing is a lot of the best electric suppliers have just given up the variable rate for residential consumers and those who continue to use it are using it to dupe consumers,” said Rep. Lonnie Reed, D-Branford, co-chair of the Energy and Technology Committee.

Looney, a New Haven Democrat serving his first term as the Senate’s top leader, said the ban would provide residential customers with stable and predictable rates whether obtained through a competitive retailer or the so-called “standard offer” of CL&P and UI.

The electric business in Connecticut was substantially deregulated in the late 1990s, when CL&P and UI were forced to sell their generating plants and instead became the owners of distribution networks. Both buy electricity through contracts with suppliers, and the rate they charge to consumers is considered the standard offer.

Elin Swanson Katz, the state’s consumer counsel, said electric retailers have told state regulators they are unable to meet a key provision of the 2014 law: A July 1 deadline for printing on every monthly bill a comparison of their rate with the standard offer of CL&P or UI.

Eversource Energy serves a majority of the state. UI serves Bridgeport, New Haven and 15 nearby communities. Their rates still are set with the approval of regulators at the Public Utilities Regulatory Authority.

“This bill is necessary because the retail energy market for residential customers is still broken, even in spite of the many good and well-intentioned reforms passed in 2014 by the legislature,” said John Erlingheuser of AARP, one of the consumer groups that sought a ban last year.

Retailers make their own purchase agreements with electric generating companies and are free to compete with Eversource and UI by offering contracts for fixed or variable rates over a specific term. Some attract customers with low teaser rates that can quickly exceed the standard offer.

Sen. Paul Doyle, D-Wethersfield, the new co-chair of the Energy and Technology Committee, who voted against the original deregulation law, said he recently signed a variable rate contract as an educational exercise. 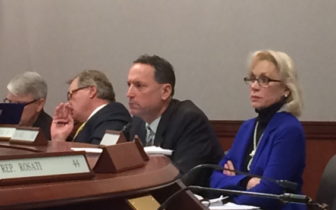 Doyle, a lawyer with an expertise in contracts, said the potential savings for a residential customer are low, while the risk of eventually paying rates double the standard offer are significant.

“I just think the variable rates are very complicated, and they don’t benefit the consumers,” Doyle said.

Senate Majority Leader Bob Duff, D-Norwalk, who opposed the ban on variable rates last year when he was the Senate’s energy co-chair, did not attend a press conference Looney held Tuesday to promote the bill.

“I’m keeping an open mind on it,” Duff said in an interview.

In a public hearing Tuesday, the industry opposed the bill, saying a market system should not ban a product.

Dan Allegretti, a vice president of Constellation Energy, a major electric retailer, told members of the Energy and Technology Committee that they should allow competition to drive poor suppliers from the Connecticut market.

“The market is slowly maturing,” he said.

If there are abuses, more consumer protections should be the answer, not a ban, he said.

The Malloy administration has no public position on the ban.