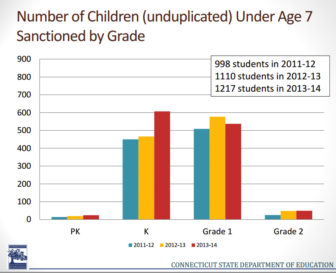 The number of kindergarten students suspended from school for misbehaving is on the rise, the Connecticut Department of Education reported Wednesday.

Minority children make up three-quarters of the suspensions, the department said, and charter school elementary students are suspended twice as often as those in the public school districts where they are located.

There were 607 kindergarten students suspended last year — 157 more than two years prior; and members of the State Board of Education say the number of young children being suspended is a problem.

“Some of it has to do with preconceived notions, opinions and expectations regarding students of color. That’s just fact,” said Theresa Hopkins-Staten, the vice chair of the state board. “Similar situations happen in other schools, but you do not see this type of disciplinary data. They are not going to be suspended or expelled.” 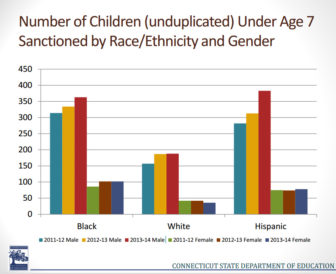 State education department data shows that black and Hispanic boys are much more likely to be suspended than their white and female counterparts, and that the number of suspensions has risen over the past three years.

It’s been nearly two years since the state board first raised concerns about the number of young children and charter students being suspended following the state child advocate’s release of the suspension numbers.

“I think we are all concerned with the pace of change,” said Charlene Russell-Tucker, the education department’s chief operating officer. “We’ve got to speed up and turn the corner with these initiatives.”

The state has funded several initiatives aimed at training school officials on how to deescalate bad behavior and how to provide necessary therapies to treat potential underlying issues. State officials also plan to use suspension data when considering renewing charter schools charters.

Nearly 60 percent of the suspensions of children under age 7 were for fighting, verbal confrontations or personally threatening behaviors. Nearly 40 percent were for “school policy violations,” which could include not following the dress code or listening to instructions.

One out of every seven elementary grade charter students are suspended, the report said, causing some state board members to question why they have suspension rates that are so much higher than other public schools.

“We’ve heard for years that if there is any sort of problem, they are out,” said Terry Jones.

Allan Taylor, the board’s chairman, said he is reserving judgement on the higher rate of suspensions among charter schools. He points out that while charters may have higher suspension rates, the students are suspended for shorter periods of time.

“We know a lot of days out from school is very bad,” he said, adding that he wants to know if those suspensions lead to more students dropping out and other poor results. “I still don’t think there’s a reason for large numbers of students to be suspended for children under age 7.” 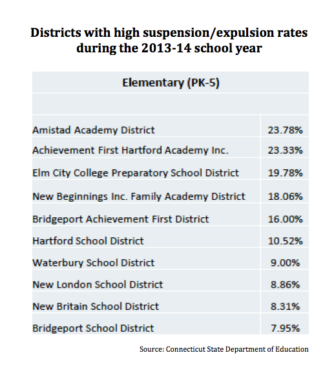