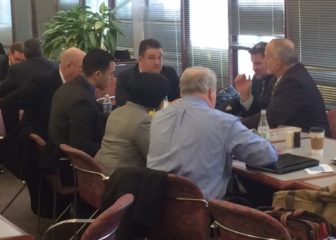 Foxwoods and Mohegan officials sit with their lobbyists in the Legislative Office Building cafeteria last week.

The Mashantucket Pequots and Mohegans, historic rivals and casino competitors, are to be introduced Tuesday as potential partners in at least one new casino in Connecticut, sources said Monday night.

Senate Democratic leaders are holding a press conference with tribal leaders, casino workers and union representatives to make “a major announcement about jobs and the future of gaming in Connecticut.”

The announcement comes less than a week after The Mirror reported that tribal leaders and their lobbyists jointly met with Senate leaders to gauge support for expanding gambling to preserve Connecticut’s share of casino jobs and revenue.

Meanwhile, the legislature’s Public Safety and Security Committee intends to hold a public hearing next week on a casino expansion bill that would authorize up to three new facilities, said Rep. Stephen D. Dargan, D-West Haven, the co-chairman of the committee.

“It’s basically a framework,” Dargan said. “For the time being we’re looking at three. One in Bridgeport, one in Danbury, and one in the Hartford-Enfield corridor, understanding that as we go forward we might end up with just one, if anything gets passed.”

The state’s two tribal casinos, Foxwoods Resorts Casino and Mohegan Sun, are facing a rapidly shrinking market share in the face of new competition, including the opening of MGM Springfield casino in 2017.

No House leader is scheduled to attend the press conference but Aresimowicz, who was out of state over the weekend, said his absence was due to a scheduling conflict, not opposition. House Speaker J. Brendan Sharkey, D-Hamden, could not be reached for comment.

Sources who have been privy to continuing talks with the tribes say proposals have ranged from establishment of one to up to three casinos to intercept gambling patrons on their way out of state, primarily to Springfield.

One source says conversations focused on two casinos north of Hartford between I-91 and I-84, while another says possibilities also include a casino off I-95 in Fairfield County.

Whatever the case, any casino proposal would add an explosive new issue in a legislative session dominated by a budget crisis.

Opposition could come from the pari-mutuel industry, whose 15 off-track betting franchises would be affected by new casino competition. OTB representatives were not invited to participate in the press conference.

Another player would be MGM Resorts International, the company chosen by the Massachusetts Gaming Commission to develop MGM Springfield. They already have a lobbyist in Connecticut, Sullivan & LeShane.

Last week, the Northeastern Casino Gaming Research Project issued a grim update on the regional gambling industry. It says that Foxwoods and Mohegan Sun have seen employment and revenue shrink by more than 35 percent since their peak year of 2006.

Combined revenue of the two casinos fell from $3.2 billion to $1.9 billion over just eight years as slots parlors opened at Yonkers Raceway and Aqueduct in New York and Twin River Casino expanded in Rhode Island.

Spending at Foxwoods and Mohegan by residents of Massachusetts, Rhode Island and New York dropped by more than 40 percent, from $1.53 billion to $883 million from 2006 to 2014.

It has dropped from a high of $430 million in fiscal 2007 to a projected $260 million next year, with the expectation of falling below $200 million after MGM Springfield opens.