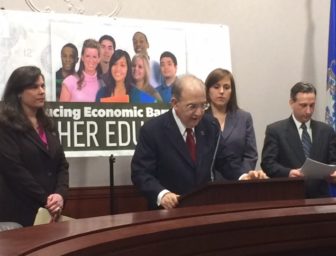 This is the week in Hartford that legislative leaders are reinforcing what President Obama and congressional candidates have signaled repeatedly: Addressing college affordability is good politics.

The flurry of action comes as the president, who addressed the issue in December, made a major policy speech at Georgia Tech on tuition costs that are rapidly outpacing inflation, forcing students and parents into debt.

Today, student loans are the biggest source of consumer debt after residential mortgages. Numbers from the U.S. Department of Education show that 511,000 Connecticut borrowers owe almost $12.7 billion in student debt.

Lesser is the new co-chairman of the Banks Committee, a panel that oversees a body of law of increasing importance in higher education – consumer rights in school loans.

On Tuesday, he and Rep. Roberta Willis, D-Salisbury, the co-chairwoman of the Higher Education and Employment Advancement Committee, outlined a proposal to create the nation’s first “student loan bill of rights” and a proposal to encourage the refinancing of student loans.

President Obama Tuesday also announced a “Student Aid Bill of Rights” during a visit to the Georgia Institute of Technology. The initiative included the expansion of a program that caps student loan payments at 10 percent of income for 20 years.

It will also require the U.S. Department of Education to create a new web site by July 2016 that would give borrowers a simple way to file complaints and provide feedback about student lenders. The White House will also ensure that federal lenders apply prepayments first to loans with the highest interest rates unless the borrower requests a different allocation.

Lesser said the confluence of activity on college affordability by the White House and both chambers of the General Assembly were a coincidence. With a smile, Lesser said of Obama’s speech, “I didn’t coordinate with him.” 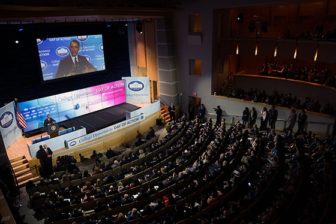 President Obama addressing improving college opportunity in a speech in December in Washington.

The affordability issue is felt directly by parents in the part-time General Assembly.

Sen. Dante Bartolomeo, D-Meriden, the co-chairwoman of the higher education committee, is the mother of a college student.

“We received what we thought was an amazing, fabulous merit scholarship of $20,000,” she said. “Well, the rest of his tuition is still more than my legislative salary.”

Sen. Mae M. Flexer, D-Killingly, who was introduced as the Senate’s most recent college graduate, said the impact of college tuitions and loans can be seen in her 30-something contemporaries.

One of the Senate bills addresses the rising cost of tuition at public colleges and universities, which is increasing faster in Connecticut than in the nation as a whole.

The Senate would set a cap on how much of the funds appropriated by the General Assembly to UConn and the universities and community colleges in the Board of Regents’ system could be used on administration.

Another Senate bill would require UConn to annually make more data available about how its financial aid is awarded, including a breakdown of money awarded to in-state and out-of-state students.

“The priority for state dollars in higher education should be on providing services to students and limiting tuition increases,” said Senate Majority Leader Bob Duff, D-Norwalk. “And we should know exactly where financial aid dollars are being spent.”

Erika Steiner, the chief financial officer of the Board of Regents for Higher Education, told the higher education panel in public-hearing testimony that a cap on administrative costs would unnecessarily limit the system’s “operational flexibility.”

She said that central office positions have been reduced from 193 in 2010, the year before the community colleges merged with the four state universities, to 159.5 this year.

“In real dollar terms, $7.9 million in expenses were eliminated,” she said.

But Sen. Gayle Slossberg, D-Milford, testified at the same hearing that rising administrative costs, coupled with cuts in state funding for higher education, are becoming a barrier to a college education.

“The model for running our higher education system has to change and be one that puts more resources in students’ hands,” Slossberg said.

The American Association of State Colleges and Universities reported last year that a new trend in state funding for public colleges was to focus on how schools are spending their money, “not just how much is provided.”

A Closer Look: Costs at Community College
Community Colleges are supposed to be an affordable entry to higher education, but costs, loans and default rates are rising.
U.S. Department of Education’s College Scorecard
Student debt, state by state
The number of borrowers with outstanding direct loans or Federal Family Education Loans as of January 2015.
U.S. Department of Education