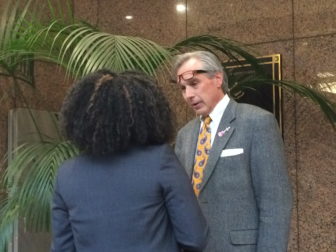 In the worlds of business and labor, Connecticut’s political identity is shaped by the partisan and ideological collisions that take place this time of year in the legislature’s Labor and Public Employees Committee.

On Thursday, as its deadline neared for reporting bills to the floor, the committee tackled a dizzying 63-item agenda that, if passed in its entirety, would redefine public and private employers’ obligations to employees.

Inch for inch, the agenda had more controversial issues than most committees confront in a year: paid medical leave, a higher minimum wage for restaurant servers, a penalty on Walmart and other large companies whose hourly pay is less than $15, wage and hour protections for domestics, expanded workers’ compensation, and more, much more.

“Everything that’s not officially dead is on the agenda…and there probably are 10 things that were dead that came back,” Rep. Peter Tercyak, D-New Britain, co-chairman of the panel, said before the meeting.

Republicans, a minority on the committee and in the Connecticut General Assembly, objected to the size and scope of an agenda largely sought by labor unions and their allies.

The Service Employees International Union asked for a bill requiring a minimum work week for janitors, some of whose employers limit hours to avoid paying benefits.

The International Association of Fire Fighters wanted a bill that would deem certain cancers, which the union says can be tied to the benzene and other chemicals released from synthetics in modern structure fires, as work-related.

The Brazilian Immigrant Center campaigned for a bill of rights for the state’s 42,000 domestic workers, who presently toil outside the protections of federal wage and hour laws.

The Working Families Party, a labor offshoot that was the impetus for Connecticut’s passage four years ago of the nation’s first state law to require private employers to offer paid sick days, was back with another boundary-testing agenda.

Two decades after Connecticut passed the nation’s first unpaid family and medical leave law, WFP is part of a coalition of labor, women’s groups and others trying to require paid leave. It also sought a bill intended to push companies like Walmart to either raise their hourly wage to $15 or reimburse the state for public assistance many of its workers now receive.

Companies or franchisors with more than 250 employees would have to pay the state $1 for every hour worked by an employee paid less than $15.

“We have a vision for an economy where employers are held accountable for the ways they treat their employees and where people are given a certain level of economic security,” said Lindsay Farrell, executive director of the Working Families Party.

Those ambitions run headlong into an effort to rehabilitate Connecticut’s image, as documented in a series of national surveys, as a state hostile to business. The state’s largest business group, the Connecticut Business and Industry Association, has set a goal for the state to become a top-20 business state by 2017, a campaign named “20 by 17.” 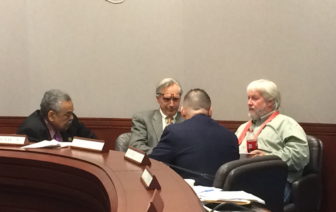 Sen. Edwin A. Gomes and Reps. Peter Tercyak and Victor Cuevas, all Democrats, with Republican Rep. Craig Miner as they tried to negotiate an agenda.

Joseph Brennan, the president of CBIA, said this is not the year to add burdens on business.

“Our message this year is enough is enough for now,” Brennan said. “Let’s focus on the environment for business and making Connecticut a more attractive place for investment and job creation.”

Senate Minority Leader Len Fasano, R-North Haven, said too often the labor committee’s bills stamp Connecticut as a political and economic outlier, reinforcing its reputation as an unpredictable place to do business.

Fasano said it doesn’t matter that many, if not most, of the labor bills won’t become law, at least not this year. (In fact, the committee’s leadership would delay Thursday’s meetings for hours while it negotiated a more targeted agenda with the GOP.)

“Businesses tell us, ‘The bills that get out of committee let us get a flavor of a state,’” Fasano said.

Tercyak doesn’t doubt that is the case.

“I assume there is a reason why just getting it out of committee is very important, for the workers’ side quite often, too,” he said. “So I would never say that the people who say that about businesses are wrong.”

Tercyak is a psychiatric nurse and longtime liberal activist whose hometown is a racially and ethnically diverse city hit hard by the de-industrialization of the northeast. He doesn’t mind rattling business.

His new co-chairman is Sen. Edwin A. Gomes of Bridgeport, a one-time Democratic lawmaker and former union official who recently won a special election as a member of the Working Families Party.

Farrell of the Working Families said, if possible, labor and its allies would happily fight in Congress for laws to lift living standards of low-wage workers nationally. 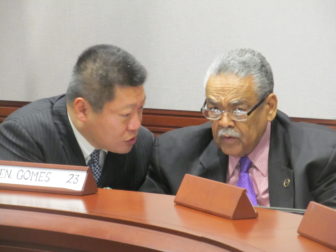 Sen. Edwin A. Gomes, the Senate co-chair, and the ranking Republican on labor,  Sen. Tony Hwang, at left.

Fighting for change in state legislatures, especially those more hospitable to labor, is the only alternative, she said.

“That’s the not new. That’s how movements have developed in this country, whether it’s child labor laws or minimum wage,” Farrell said. “We gain momentum in states. We take an issue that’s not getting attention and give it a real narrative.”

To no one’s surprise, a meeting that was supposed to start at 9 a.m. Thursday was delayed as Democrats and Republicans caucused past noon, then negotiated to narrow the agenda. The meeting continued long after dark.

Tercyak, his reading glassed perched on his forehead, periodically emerged from the Democratic caucus room to update lobbyists and touch base with the committee’s Republicans, who are led by Hwang and Rep. Dave Rutigliano of Trumbull.

Bob Shea, a lobbyist whose clients include the Brazilian Immigrant Center, intercepted Tercyak to talk about legislative language. Brian Anderson, a lobbyist for AFSCME waited for his turn. Then came Rochelle Palache of SEIU’s 32 BJ, which represents janitors.

Natalicia Tracy of Bridgeport, who works at the Brazilian Immigrant Center, called out as Tercyak returned to the meeting room: “Peter, we’re counting on you! We really are.”

She is a former domestic worker who came to the U.S. to work, finding herself as an indentured servant in Boston for two years.

The day would bring her good news: The domestic worker bill passed, a first step to making Connecticut the fifth state, after Massachusetts, New York, California and Hawaii, to treat domestics like other workers.

Other winners: Expanded workers’ compensation for firefighters who get certain cancers and first-responders suffering from post-traumatic stress.

The pay equity bill, which was proposed by Gov. Dannel P. Malloy, also made the cut on a unanimous vote. It would prohibit employers from punishing workers or barring them from sharing information about wages.

“This bill, with unanimous and bipartisan support out of committee, outlaws ‘pay secrecy’ directives, which encourage discrimination and perpetuate the gender wage gap,” Malloy said in an emailed statement.

The committee also approved the paid medical leave bill, which would create a fund that employees on leave could draw on. It would be paid by assessments on workers, who could opt out of contributing.

SEIU got its scheduling bill for janitors.

The Walmart bill passed, despite GOP objections that it also would affect small business owners who operate national franchises.

“It puts a black mark on Connecticut,” said Rep. Richard Smith, R-New Fairfield. “This in my mind is an attack on business, when in my mind we should be doing everything we can to help business.”

The issue of applying the minimum wage to restaurant servers who get tips never came up, nor did a bill that would require employers to set a predictable schedule for shift workers.

House Majority Joe Aresimowicz, D-Berlin, who is employed by AFSCME, dropped by to huddle with committee members on several bills. Aresimowicz said he was aware that business sees much of the committee’s work as harmful.

“Some things that the business community doesn’t like, it doesn’t mean it’s a discussion we shouldn’t have,” Aresimowicz said.