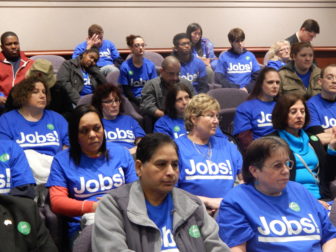 While Gov. Dannel P. Malloy was noncommittal Tuesday about a proposed expansion of gaming in Connecticut, it drew support from business, labor and municipal leaders.

The legislature’s Public Safety and Security Committee, which held a public hearing on the proposal developed by Connecticut’s two Indian casinos, also heard from state lottery officials, who said further investments in their games are crucial to keep that program healthy.

“I do understand that the argument they’re making is about jobs,” Malloy told Capitol reporters following Tuesday’s State Bond Commission meeting. “I’ll listen to their arguments.”

But the governor also cautioned legislators about pursuing the proposal as a means to expand gaming in Connecticut, rather than simply to mitigate growing competition from casinos in Massachusetts and other neighboring states.

“I think the issue of casinos in our state is settled,” the governor said, referring to the fact that Connecticut – for decades – only has had casinos run by its two federally recognized Indian tribes in southeastern Connecticut. These involve the Foxwoods Resorts Casino, run by the Mashantucket Pequots, and the Mohegan Sun, run by the Mohegan tribe.

Because Connecticut prohibits casino games in the state outside of the tribal nations, the tribes give 25 percent of video slot receipts to the state. But those receipts, which peaked at $430 million in 2007, have steadily dropped since, and are expected to fall to $191 million by 2018.

The argument “really shouldn’t be revenue-driven,” the governor added.

But tribal representatives again told lawmakers Tuesday that their goal is to preserve a vital segment of Connecticut’s economy – and the thousands of jobs that go with it.

MGM Resorts International, which is developing an $800 million casino in Springfield, has been very clear it is targeting Connecticut’s gaming industry. Two other casinos are being developed in Massachusetts — near the Rhode Island border and in Everett, just north of Boston. Two other casinos opened in recent years in Rhode Island, in Lincoln and Newport, and New York also has expanded its gaming industry. 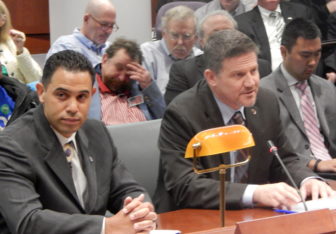 The tribes have proposed opening as many as three new facilities to try to target Connecticut patrons who might want to try casinos in other states. But the tribes’ initial plans call for one facility, probably located in north-central Connecticut, to combat competition from the Springfield casino.

“This threat is serious,” Mohegan Tribal Chairman Kevin Brown said. “Why wouldn’t Connecticut fight to be competitive and successful?”

But Rep. Tim Larson, D-East Hartford, a member of the public safety committee, said that while it’s important to preserve jobs, “the state of Connecticut would surely have to realize some additional revenue” if it allowed gaming outside of the tribal properties.

Lawmakers did hear opposition from a few lawmakers, including one who urged them to keep gaming out of his community.

Sen. Tony Hwang, R-Fairfield, one of the legislature’s most vocal opponents of gambling, said, “We have not measured the truly escalating cost” in terms of addiction treatment, casino-related crime and excessive gambling losses.

Connecticut hasn’t studied the impact of problem gambling since 2008. And that report, which was widely criticized for using early data that proceeded much of the growth in the state’s gaming industry, concluded 192,000 people were at risk of becoming problem gamblers.

Sen. Michael McLachlan, R-Danbury, said a new, super-market-sized gaming parlor is not “a good fit for our economy…I would respectfully request that Danbury be taken off the list for consideration.”

The proposed legislation would not allow any facility to be constructed unless first approved by the host community.

McLachlan said Connecticut would be better served if its leaders accept that the state no longer hosts the only casinos in the region and that exclusive status cannot be regained.

“The monopoly has been broken,” he said. “You can’t un-break a monopoly.”

Butler said he’s confident the tribes could find communities enthusiastic about hosting one of their facilities, arguing they have been good neighbors in southeastern Connecticut.

“We’ve substantially overcome the integrity issue by our years of experience,” he said, adding that his tribe has many workers who have been with them for decades. “They’ve put their kids and their grandkids through school…with those (casino) jobs.”

Municipal leaders in southeastern Connecticut testified in favor of the plan, arguing it would help stabilize finances at both casinos in their region and ultimately preserve jobs there as well.

Montville Mayor Ronald McDaniel said about 10 percent of his community’s population works at Mohegan Sun, which has proven itself willing to work with local leaders to settle any issue. “We have built a strong and enduring relationship based on regular communication,” he said.

Southeastern Connecticut’s economy was crippled in the early 1990s as the end of the Cold War shrank the defense industry that had dominated the region for decades.

Foxwoods, which opened in 1991, and Mohegan Sun, which began five years later, helped restore the region’s economy, said Norwich Mayor Deb Hinchey. “Our region would have been devastated without the thousands of good-paying jobs provided by the casinos.

Thomas “Tony” Sheridan, president of the Chamber of Commerce of Eastern Connecticut, added that the casinos are crucial to the state’s overall economy and affect far more than gaming. Most of the state’s major tourist attractions are in southeastern Connecticut and also would be affected if casino operations shrink.

“Timing is of the essence,” Sheridan said. “The casinos now are what I would call the center of entertainment for southern New England.”

Two labor groups also testified in favor of the proposal.

David Roche, president of the Connecticut State Building Trades, said the project would provide another boost to a construction industry that has finally begun to grow again over the last four years. 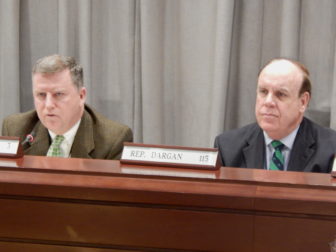 Julie Kushner of the United Auto Workers Region 9A, which represents about 1,500 casino dealers, added that “we know this is about protecting jobs and growing jobs in Connecticut.”

Kushner added, though, that the union also would like the facility, unlike the casinos, to be smoke-free.

The proposal did raise some concerns from other problem gambling opponents – and from some in the gaming industry.

Donna Zaharevitz, a recovery coach with the Connecticut Council on Problem Gambling, cautioned lawmakers that gambling addiction is worse – in one regard – than compulsive drug or alcohol use.

“There are no physical signs,” she said, pointing at herself. “This is what a gambler looks like. We look normal.”

Tribal representatives have said their groups would be willing to increase the payments they already make to support and treatment programs for problem gamblers.

Lawmakers did hear concerns Tuesday from the president of Sportech, the British company that operates 15 off-track betting parlors in the state, including the Bradley Teletheater in Windsor Locks.

Ted Taylor told lawmakers his firm has invested millions of dollars in recent years to upgrade these facilities to deal with increased competition from outside Connecticut, including the planned Springfield casino.

If a new tribal gaming facility were developed in one of the Sportech parlors, it could be a good fit, Taylor said.

Otherwise, “it would devastate our business,” he said, adding that Sportech employs about 400 people in Connecticut.

And those employees, Taylor added, “deserve a chance to survive and maintain their livelihoods” and “are just as important as anybody else’s employees.”

The president of the Connecticut Lottery, Anne Noble, warned lawmakers not to allow the casino industry to grow without making additional investments in its lottery program, which competes for gaming dollars.

This should including “modernizing” the lottery and allowing it to “broaden its offerings and distribution channels.”

Noble didn’t mention specifics, but lottery officials in the past have supported legalization of Keno – an electronic, lottery-style numbers game offered in bars and restaurants in some states.

The legislature and Malloy enacted a statute two years ago that would have allowed Keno to be offered in Connecticut bars and restaurants, but scrapped plans before they were implemented one year later amid fears of voter opposition heading into the 2014 state elections.