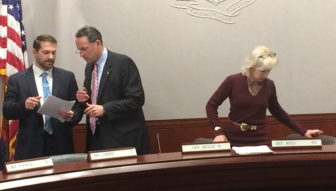 Sen. Paul Doyle, center, consults with staff at the start of Tuesday’s Energy and Technology Committee meeting. At right is his co-chair, Rep. Lonnie Reed.

With a packed audience of lobbyists waiting and watching, the legislature’s Energy and Technology Committee approved three dozen bills Tuesday that define the General Assembly’s relatively modest ambitions on energy policy in 2015.

The more significant bills would ban variable electric rates for residential customers, cap the fixed-costs portion of electric bills and authorize state officials to explore expanding the capacity of pipelines that bring natural gas into Connecticut.

But there are no sweeping efforts this year to reshape how the state regulates the $3 billion market for buying and selling electricity, a commodity whose prices remain stubbornly high in the state.

“It’s a year for reassessment and analysis,” said Rep. Lonnie Reed, D-Branford, the House co-chair of the committee.

Aside from Reed, the committee has new leadership: Sen. Paul Doyle, D-Wethersfield, is the new Senate co-chair. The new ranking Republicans are Rep. Tim Ackert of Coventry and Sen. Paul Formica of East Lyme.

One of the bills that could eventually lead to a significant impact on the energy market would allow the Department of Energy and Environmental Protection to explore how to replace existing 28-inch gas pipelines with 40-inch pipelines.

“It’s controversial, because some people say, ‘Why would the state get involved?’ ” Doyle said. “At this point, we’re still exploring. It’s early in the process. DEEP is saying it would lower costs. Other interests say it would raise them.”

The generation of electricity in the state is heavily reliant on natural gas, but insufficient supply means that during the winter months electric utilities must periodically buy more expensive power from plants that stand idle except during peak-usage times.

The bill was sought by the administration of Gov. Dannel P. Malloy, which concluded that the market would not move on expanding transmission capacity without a nudge from the state.

Oil dealers, who already are furious at the Malloy administration for encouraging residential heating customers to convert to gas, say making the costs of new pipelines recoverable through electric bills would drive up the cost of electricity.

The bill was rewritten to allow DEEP to seek requests for proposals on how to finance the upgrading of gas pipelines, but action on those proposals would require further legislative review, Doyle and Reed said.

“Hopefully, there will be a plethora of choices,” Doyle said. “What does the market say is the best solution?”

Another bill endorsed Tuesday would cap the monthly fixed-cost portion of electric bills at $10.

The bill was a legislative response to a request by the state’s largest utility, Connecticut Light & Power, now renamed Eversource Energy, to raise the monthly fixed rate from $16 to $25.50.

Regulators eventually approved a rate of $19.50.

Utility officials have said that capping the fixed rate, which is the monthly fee consumers pay for overhead regardless of usage, only would force per-kilowatt costs to go higher.

The agenda Tuesday also reflected a historical tension in the committee and the marketplace over how to widen the market for solar energy without increasing costs to consumers, who now pay the highest rates in the continental U.S.

“Electric rates are high. We need to lower them,” said Rep. Laura Hoydick, R-Stratford. “We’re all trying to get to that goal. We may be going about it different ways, but that s what we’re trying to achieve.”

That meant a significant downsizing Tuesday in a bill intended to create a dramatically larger market for solar energy by theoretically putting solar within the reach of the 80 percent of residents who either rent or own homes that are unsuitable for the installation of solar panels.

The so-called “shared solar” bill would have created a mechanism allowing these customers to buy shares of solar panels installed elsewhere, which advocates say already is allowed in at least 10 other states.

But the committee adopted a compromise that creates a three-year pilot program.

Reed said there was widespread concern among committee members, as well as from the Office of the Consumer Counsel, about the potential for increasing costs for electric ratepayers.

“That’s a big concern, so we really need to know what that looks like in Connecticut and how it’s going to operate, get real data,” Reed said.

Chris Phelps of Environment Connecticut, one of the policy groups backing a more ambitious version of the bill, called the compromise a disappointment.

“Quite frankly, Connecticut is being left behind on these policies,” Phelps said.

But Hoydick was among the committee members to praise the pilot program as a cautious step that would help legislators decide in three years how to proceed further.

“Solar is going to stay,” Hoydick said. “But the way to make it stay and make it more affordable is to get market pressure to drive the price down.”

With little debate, the committee approved a bill sought by AARP and other consumer groups that would ban variable electric rates offered by electric retailers to residential customers.

Senate President Pro Tem Martin M. Looney, D-New Haven, and the committee’s co-chairs endorsed the proposal earlier in the session, saying the variable rates too often were used as teasers that enticed customers who then found their rates jumping with little notice.

Many of the bills approved by the committee Tuesday will continue to evolve if they are to come to a floor vote in the House and Senate, legislators said.

House Speaker J. Brendan Sharkey, D-Hamden, who has final say over which bills come to a vote in the House, said he is most interested in bills aimed at stabilizing or lowering electric costs.

“What I would like to see, mostly, are consumer friendly approaches to energy and the cost of energy, not only for residential consumers but for small businesses,” Sharkey said. “We have to really bend the curve on the cost of energy in the state.”

The governor hinted at slowing permitting and being able to “play some games there.”

Getting food waste out of the trash may provide the key to fixing the dated waste systems in the state.

Our biological waste can tell scientists much more about our collective pathologies than just our coronavirus exposure.

Gina McCarthy will be Biden’s ‘climate czar.’ What the heck is a climate czar?