Tribal lenders claim right to charge 448% on loans in CT 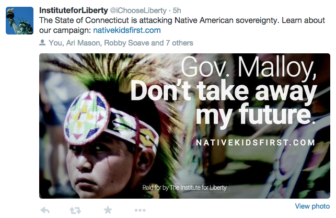 Malloy was the target on Twitter. A similar message could be seen by commuters on I-84

An Oklahoma tribe and its allies are fighting a legal, advertising and social-media war in Connecticut, claiming a right as a sovereign government to make unlicensed short-term loans at astronomical interest rates in defiance of state usury laws.

Acting on consumer complaints, the state Department of Banking last fall imposed a $700,000 fine and ordered two on-line lenders owned by the Otoe-Missouria tribe of Red Rock, Okla., to cease making small, short-term loans to Connecticut borrowers at annual interest rates of up to 448.76 percent.

Connecticut caps such loans at 12 percent.

Now, a national conservative group supporting the tribe is counter-attacking with a billboard and a social-media campaign that draws Gov. Dannel P. Malloy into the dispute, accusing the Democratic governor of being party to a regulatory action that deprives an impoverished tribe of revenue.

“Gov. Malloy, Don’t take away my future,” reads the headline over a photo of a Native American child that is circulating on Twitter. A similar message now greets commuters from a billboard off I-84 west of Hartford.

Bruce Adams, the general counsel at the state banking department, said the angle was ironic, given that so-called payday loans dearly cost low-income borrowers who are in desperate need of cash and have no access to more conventional and affordable credit.

“They are saying, ‘Gov. Malloy, stop infringing on the right to help our poor people on the backs of your people.’ I think that’s it in a nut shell,” Adams said.

A battle that had been quietly waged in Superior Court in New Britain and U.S. District Court in northern Oklahoma went public this week on Twitter and a new web site, nativekidsfirst.com, launched by a conservative group whose funders are secret.

The Institute for Liberty is responsible for the web site, the jabs on Twitter and the content of at least one billboard. It is a non-profit group organized under Section 501 c 4 of the Internal Revenue Code, which shields its financial backers from public view.

Malloy played no direct role in the enforcement action, but the institute’s president, Andrew Langer, says the governor is fair game.

“It’s the governor’s state. He’s the governor, and the buck stops with him,” said Langer, a former lobbyist for the National Federation of Independent Business.

Langer, whose institute is based at a Washington, D.C., “virtual office,” a building that provides a mailing address, phone services and limited actual work space, declined to say who else is involved in the organization.

He said he is not being paid by the tribe or any financial partner of the tribe’s on-line loan business to attack Malloy, but he declined to identify his funders.

“We believe our donors have a sacrosanct right to their privacy,” he said.

Under fire from state and federal regulators, payday-type lenders have sought the shelter of Indian reservations in recent years, allowing them to claim sovereign immunity from state banking laws.

According to a complaint by the Department of Banking, the Otoe-Missouria tribal council passed a resolution creating Great Plains Lending on May 4, 2011.

Bloomberg Business reported last fall that the tribe got into the on-line lending business through a deal struck in 2010 with MacFarlane Group, a private-equity company owned by an on-line lending entrepreneur named Mark Curry, who in turn is backed by a New York hedge fund, Medley Opportunity Fund II.

Citing documents in a lawsuit filed by an investment banker against MacFarlane, Bloomberg reported that the company generates $100 million in annual profits from its arrangement with the Otoe-Missouria tribe. Charles Moncooyea, the tribe’s vice chairman when the deal was struck, told Bloomberg that the tribe keeps one percent.

“All we wanted was money coming into the tribe,” Moncooyea said. “As time went on, I realized that we didn’t have any control at all.”

John Shotton, the tribal chairman, told Bloomberg that Moncooyea was wrong. He did not respond to an interview request from The Mirror.

By 2013, Great Plains was seeking business in Connecticut with direct-mail and on-line appeals to potential customers, offering unsecured loans as small as $100. Clear Creek, a second lender owned by the tribe, was offering loans in Connecticut as of last year.

Three Connecticut residents filed complaints in 2013, prompting the state Department of Banking to find that Great Plains was unlicensed and charged interest rates far in excess of what is allowed by state law.

Howard F. Pitkin, who recently retired as banking commissioner, ordered the cease-and-desist order and imposed a penalty on the tribe’s two loan companies, Clear Creek Lending and Great Plains Lending, and the tribe’s chairman, Shotton, in his capacity as an employee of the loan companies.

Last month, they filed a federal civil rights lawsuit in U.S. District Court in northern Oklahoma against Pitkin and Adams, an evident tit-for-tat for Connecticut’s citing Shotton in the original regulatory action, making him personally liable for a share of a $700,000 fine.

“Clearly what we believe is they are zeroing in on the chairman for pressure. That, we thought, was an abuse of authority, which is why we filed the action,” Stuart D. Campbell, a lawyer for the tribe, told The Mirror.

In Connecticut’s legal system, the tribe and its lenders encountered a skeptical Judge Carl Schuman at a hearing in February, when they sought an injunction against the banking regulators.

Payday loans are short-term, unsecured loans that often amount to little more than an advance on a paycheck — at a steep cost. The tribe offers repayment plans longer than the typical payday loan, but its rates are nearly as high.

Great Plains’ own web site warns that its loans are expensive, suggesting they be viewed as a last resort after a borrower exhausts other sources.

One Connecticut resident borrowed $800 from Great Plains in October 2013. A year later, according to the banking department, the borrower had made $2,278 in payments on the $800 loan.

Senate votes to allow those on parole to vote