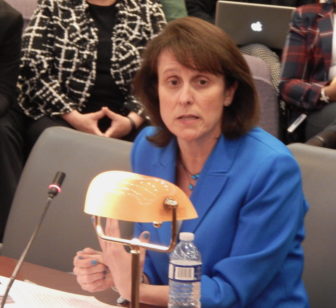 A legislative hearing on a renewed proposal to legalize keno raised old concerns Wednesday about expanding gambling in restaurants, bars and convenience stores and new ones about profit-sharing and technology.

The Indian tribes that run Connecticut’s casinos could receive roughly as much from keno as the state would next fiscal year. That’s according to details of the bill raised by the Finance, Revenue and Bonding Committee as well as gaming proceed projections from the Connecticut Lottery Corporation.

Meanwhile, the tribe that operates the Mohegan Sun casino complained that the legalization measure removes safeguards that could pave the way for dramatic shift in state policy – namely the launch of online gaming.

Anne Noble, the president of the Lottery Corporation, said the lottery was not seeking permission to conduct online gambling or to sell its products over the web and would work on clarifying the legislation.

“There’s not an issue here,” Noble said. “If the language needs to be tickled, we’ll certainly tickle the language. We look forward to working with the tribe.”

Meanwhile, opponents of gambling expansion renewed their opposition to keno, noting that the legislature approved and repealed the game in 2013 and 2014, respectively, in the face of public pressure.

“It may be small, but it will grow over time,” Noble said of potential keno revenues, noting they follow a different path from other games.

Receipts from popular big-drawing lottery games, such as Powerball, explode at first, then plunge from that initial high before achieving relative balance, she said.

Keno, which would be offered not just in convenience stores, but also in bars and restaurants, tends to build a player base over time, and attracts more affluent gamblers than lottery tickets.

But since the state expects to have to share some of its keno proceeds with the Mohegan and Mashantucket Pequot tribes, the state’s ultimate profit on the game may be less than lawmakers’ expected — and less than the tribes receive — at least in the first year.

The lottery estimates gross keno receipts would be $25 million, if approved, in the 2015-16 fiscal year. Noble called that a “conservative estimate,” adding it also reflects only six months’ receipts, assuming the lottery would need the first half of the fiscal year to prepare to launch the game.

But after paying prizes and meeting expenses, the state’s profit margin could be as low as 20 percent, or $5 million. But it can’t keep all of that.

That’s because the compact that grants the state a share of the casinos’ video slot revenues, also grants the tribes that run them exclusive rights to offer casino games in the state.

The legislation allows the state to transfer up to 25 percent of proceeds after prizes are awarded but before the lottery covers its other expenses – or about $2.2 million of the state’s $5 million profit – to the tribes.

But Noble also told lawmakers to think-long-term, adding that keno revenues have the potential to grow significantly over the next few years as the game attracts more players at thousands of sites.

In Massachusetts — the home of the most successful lottery in the nation in terms of per capita sales — the $790 million wagered on keno two years ago was 17 percent of the lottery’s gross revenues of $4.7 billion.

But Noble also said Wednesday that preliminary numbers show interest in many lottery ticket games has peaked. The $310 million the lottery is expected to transfer into the state’s coffers this year is down slightly from the $319 million contributed in 2013-14.

Lottery officials also said they would face increasing competition if lawmakers approve a proposal from the Mashantucket Pequot tribe — which operates Foxwoods Resorts Casino — and from the Mohegan tribe to open as many as three smaller casinos outside of tribal territory in Connecticut.

Noble insisted the game — a lottery-style contest using randomly drawn numbers — would not be played electronically, and participants would fill out paper slips to select their numbers.

But Chuck Bunnell, the Mohegan tribe’s chief of staff, wrote in his testimony that, in the legalization measure, keno is “too loosely defined to be acceptable.”

The tribe’s interpretation of the bill holds that it removes existing restrictions that prevent lottery games from being conducted online.

“Some may find these small changes to be insignificant, but in this instance words do matter greatly,” Bunnell wrote, adding that the language “raises some deep concerns for our tribe.”

Noble issued her statement offering to work with the tribe on the bill’s language after hearing of Bunnell’s testimony.

Sen. Tony Hwang, R-Fairfield, one of the legislature’s most vocal opponents of gambling, argued keno would expand this activity dramatically by reaching into bars and restaurants where gaming currently is not present.

“We’re taking it to another level,” Hwang said. “That goes to the very essence of a family setting.”

Hwang and others also argued that Connecticut has not done a detailed study on the negative impacts of gambling in more than a decade, and should conduct one immediately.

Shattered lives, broken families and suicides tied to gambling addiction “are issued that cannot be measured” in dollars and cents, he said. “The fact is we have not added up how much it costs our communities to pick up the pieces of broken lives.”

Tamara Petro, executive director of the Connecticut Council on Problem Gambling, also pressed for a new study, and said offering keno in restaurants could increase addiction.

“It may expose children if the proximity for gambling is in family settings,” she said.

Joanie Mascot, a gambling addict who is in her 12th year of recovery, told lawmakers should couldn’t participate Wednesday in a simple lottery at the Legislative Office Building. Visitors draw slips of paper from a shoe box to determine the order in which they will testify before the committee. A legislative staffer drew the slip for her.

“As simple as it sounded, that would have been really hard for me to do,” said Mascot, who said she had been imprisoned for embezzling from her former employer.

The House Select Subcommittee on the Coronavirus Crisis probe seeks answers from Kabbage and BlueVine.