A guide to the budget: Where do your tax dollars go? 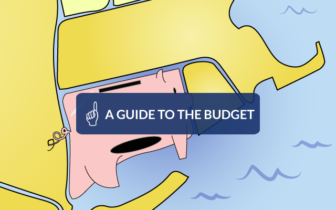 So what’s actually in the budget? Where do your tax dollars go?

This year, the state’s general fund — the main source of state funding — has a budget of $17.5 billion. Where does it go?

What’s in the budget?

Personnel costs: $6.6 billion; 37.8 percent of spending
This covers the salaries and benefits for state employees, as well as state payments toward teacher pensions and retirement benefits.

Municipal aid: $3 billion; 17.6 percent of spending
The state provides money to cities and towns for a variety of functions. A big chunk of it goes for education.

Medicaid: $2.3 billion; 13 percent of spending
This is the health coverage program for people who are poor or have disabilities. As of January, it covered 723,769 Connecticut residents, or about one in five people in the state. This figure represents only the money the state pays for Medicaid services; the federal government also provides more than $2 billion in funding toward Medicaid costs.

Debt service: $1.8 billion; 10.1 percent of spending
This is the money the state spends to repay past borrowing.

That adds up to 78.5 percent of general fund spending.

Those four areas take up a lot of money. Is that where lawmakers look for savings?

Well, not quite. In some cases, there’s little the state can do legally to reduce spending in these areas. In other cases, it’s legally possible, but it’s been a non-starter politically.

Personnel costs are also tricky because much of the spending is dictated by union contracts. That means any major cuts would require negotiations. And layoffs are generally avoided because they don’t yield the huge savings that some might anticipate.

According to a state Office of Legislative Research report, several factors typically cut the first-year savings from layoffs in half, including:

For example, Gov. M. Jodi Rell’s administration estimated in late 2009, as Connecticut was mired in the Great Recession, that laying off 5,000 workers — roughly 1/10th of the workforce at that time — would have saved less than $300 million in the 2009-10 fiscal year.

Cutting Medicaid spending can also be tricky, because the program is an entitlement, which means that anyone who meets its eligibility criteria has to be granted services, whether the state has budgeted the money for it or not. And since the program is partially funded by the federal government, any major changes to the program require federal approval. Still, there are ways to cut back spending, including scaling back eligibility so fewer people qualify, paying health care providers less for services, or better managing the care of clients so they stay healthier and use less-costly care. Some of these moves have not been politically popular in the past, though.

Municipal aid: Traditionally this segment of the budget enjoys the strongest level of bipartisan support, and is almost never reduced by large numbers. In addition, it has been a decade since the legislature has given the governor even limited discretion to reduce local aid modestly in the event of a mid-year budget deficit. The most consistent argument against cuts to municipal grants are that they could trigger increases in local the property tax — which already is recognized generally as the most regressive tax in Connecticut. This was confirmed in a state report last December which found that almost one-quarter of all taxes Connecticut’s poorest households pay to local and state government are property taxes.

How do the various budget proposals address these areas?

The budget for the upcoming fiscal year is forecast to have a $1.3 billion deficit, according to nonpartisan analysts. That means that budget proposals must include ways to fill that gap.

Gov. Dannel P. Malloy’s proposal, released in February, called for spending $18 billion in the general fund next fiscal year and $18.6 billion the year after that. He would have closed a $1.1 billion projected deficit in the first year with $590 million in cuts and $557 million in new revenue. The latter included almost $200 million in net tax and fee hikes and another $227 million by canceling or delaying $227 million in previously approved tax cuts that were supposed to begin next year.

About $120 million of Malloy’s proposed cuts came from Medicaid. The governor proposed scaling back eligibility for some parents and pregnant women, and reducing payment rates for health care providers.

Almost all of the other proposed cuts were concentrated in that 21.5 percent of the budget that funds everything outside of Medicaid, personnel, municipalities and debt service.

The Republican budget proposal avoided many of the social service cuts Malloy proposed and did not include several of the tax increases Malloy called for. It would have made up a significant gap through cuts to spending on state employees, something that would likely have required either labor concessions or layoffs.

The legislature’s budget and revenue committees, which are controlled by Democrats, released plans that called for reversing many of the spending cuts Malloy proposed and raising taxes even more to account for much of the difference.

The budget that passed the House and Senate June 3 called for some cuts to health care and social services and other state programs. It did not require savings from state employees and left municipal aid largely untouched. It called for raising taxes by nearly $2 billion over the next two fiscal years, drawing intense opposition from business groups.