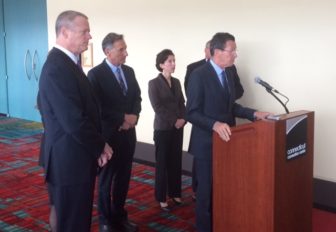 With the careful language of a State Department communiqué, New England’s governors renewed their commitment Thursday to “coordinated action to address our regional energy challenge.”

Exactly what that means will continue to evolve as the region’s four Democratic and two Republican governors, two of whom are just three months into the job, work on finding common ground for themselves and their states.

Five of the region’s six governor’s met at the Connecticut Convention Center in downtown Hartford to talk about how to work together on increasing energy infrastructure in the most expensive region for purchasing electricity.

No concrete progress was made toward a goal of Gov. Dannel P. Malloy: Devising a way for state governments to prod the marketplace into increasing the capacity of natural gas pipelines into the region.

New England paid an estimated $7.5 billion over the past two winters in higher costs for natural gas, a mainstay fuel for the generation of electricity in the region, as well as home heating.

“The marketplace itself has not resolved this issue. And by the way, if I just made an extra $7.5 billion in the last two years, and I was the market, I’m not sure I would want to resolve this issue,” Malloy said. “That’s the situation we find ourselves in.”

Connecticut, Massachusetts and Rhode Island are jointly supporting the issuance of a request for proposals from private developers for greater energy transmission capacity and more sources of clean-energy. A bill pending in the state Senate would give the Malloy administration greater flexibility in pursuing such a project.

Natural gas prices are higher in New England because of limited pipeline capacity, but the industry has looked warily on the profitability of new pipelines.

Winning approval for new pipelines outside existing rights of way is politically difficult, and oil dealers in Connecticut have organized against financing pipeline construction through electric rates.

The meeting attracted protesters opposed to the greater use of natural gas, as well as support from the Laborers International Union, which equates new pipelines with construction jobs.

Malloy, a Democrat re-elected last fall to a second term, was joined by two newly elected governors, Republican Charlie Baker of Massachusetts and Democrat Gina Raimondo of Rhode Island, plus Democrat Peter Shumlin of Vermont and Paul LePage of Maine.

They are united by the high cost of electricity.

“New England states are outliers in the country. We are outliers,” said LePage, who declined to attend a similar conference a year ago. “It’s that simple.” 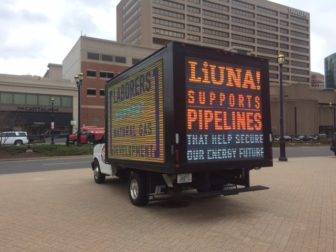 LIUNA, the Laborers International Union, equates a pipeline with jobs.

In December, 2013, governors of the six New England states signed an agreement committing them in principle to expanding gas and electric transmission lines, without endorsing any specific project.

Sixteen months later, the region still is moving slowly on expansion — and that is fine with the Conservation Law Foundation, one of the groups monitoring the region’s approach to energy.

“While we are pleased that the governors are focusing on a multi-faceted approach to addressing our communities energy needs with a sharp focus on energy efficiency and renewables, we continue to be concerned about the over-sized role of natural gas and that ratepayers will be stuck holding the bill for it,” said Greg Cunningham of the Foundation.

Cunningham said that the availability of liquid natural gas drove down energy costs over the previous winter without committing electric ratepayers to a long-term investment in gas pipelines.

Its predecessor company, NU, issued a similar statement 16 months ago.