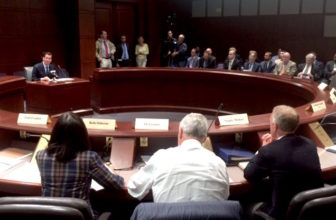 Adding 1 percentage point to the sales tax, imposing tolls or even selling some of Connecticut’s transportation assets were among the “potential” options Gov. Dannel P. Malloy’s administration outlined Tuesday to pay for a major transportation overhaul over the coming decades.

But the governor’s budget chief, Office of Policy and Management Secretary Benjamin Barnes, also told the Transportation Finance Panel that the administration was neither endorsing nor opposing these ideas right now. Rather it wants the panel of experts, which must put forward a funding plan this September, to understand all options.

“We just tried to identify what the productivity of those individual taxes were,” Barnes told the panel at its first meeting.

For example, if Connecticut were to raise its sales tax rate from 6.35 to 7.35 percent, it would generate an extra $640 million per year, according to Barnes’ presentation.

Other examples Barnes provided include:

Though the governor first touted his transportation plan as a $100 billion investment over the next 30 years, the panel’s challenge is to find funding for a much smaller number.

That 30-year estimate reflects not only a combination of state and anticipated federal dollars, but also includes the existing level of state investment in transportation.

Department of Transportation Commissioner James Redeker said the initial goal over the first five years is to boost the annual level of approved state financing for transportation capital projects from $1.4 billion to $2 billion by 2020.

A second, and equally important, objective over the next few years is to stabilize the section of the state budget that covers DOT operating expenses and debt service on state transportation bonds — the Special Transportation Fund. This fund is headed for insolvency by 2018.

The Malloy administration estimates the transportation fund will need an extra $181 million by 2020 to remain in balance, and $351.5 million extra to make debt payments on the additional highway, bridge, rail, airport and other transportation projects the governor wants. That’s $532 million more in annual revenues for transportation than the fund received this year.

And whatever revenue sources are chosen for transportation also have to grow, because Malloy wants to sustain an increased investment over three decades.

“Our state has historically under-invested in transportation,” the governor told the panel, “and has not appropriately planned for its future.”

That means the state’s plan to finance this work almost certainly can’t come from just one source.

Besides the potential revenue options Barnes attached cost estimates to, the budget chief told panelists they also are free to explore tolls or even the sale of state assets.

Connecticut is one of only a few states, for example, that owns its rail system. That means not only parking lots, rail stations and other property along its major transportation corridors, but the actual rail lines themselves.

Barnes made it clear that selling assets was “pretty complicated and has a lot of risk and a lot of downside.” He also wouldn’t rule out opposing any panel recommendation to sell assets, depending on the specifics.

Still, he added, “I’m pretty sure there are plenty of folks who would like to tell us how much they would give us for the right to charge what they want to let the trains roll.”

Former state Rep. Cameron Staples, a New Haven Democrat who chairs the study panel, said his group understood the message: All ideas must be explored when the goal is this ambitious, but be careful.

“We know this is a big task and we’re not going to limit ourselves in terms of what we look at,” said Staples, whose group will meet next on May 18, and will hold a public hearing on June 23. “We need to find the right revenue streams that will do the job and grow over time. We have a lot of work to do first.”

Progressives to Lamont, GOP: Brace for a debate on tax fairness

Senate GOP wants to roll back sales tax rates in 2022

With state government on pace for another massive surplus, Senate Republicans want a temporary rollback of sales tax rates.