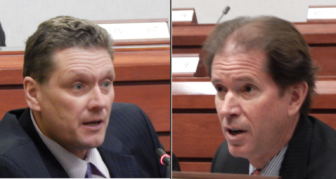 A key legislative panel broke Wednesday with Gov. Dannel P. Malloy by recommending a plan that bolsters state tax and fee receipts by more than $1.8 billion over the next two fiscal years, including more than $540 million in new income taxes on the wealthy and an overhaul of the sales tax.

The package, approved on a party-line vote by the Democrat-controlled Finance, Revenue and Bonding Committee, includes about $1.3 billion in tax increases, while also canceling or delaying nearly $500 million in tax cuts scheduled to begin in the coming biennium.

The new plan also would impose significant new tax increases on corporations and hospitals, and would authorize the Connecticut Lottery to launch keno in bars and restaurants.

The revenue proposal exacerbates growing tension between Malloy and his fellow Democrats in the General Assembly’s majority.

The governor, who campaigned on a pledge not to increase taxes despite big deficit projections for 2015-16 and 2016-17, proposed a net tax hike of $360 million in the two-year budget he submitted in February. But he also recommended hundreds of millions of dollars in cuts to social services — reductions the Appropriations Committee largely restored last week.

Asking the wealthy to pay more

“I can’t tell you how many people came to me, called me, e-mailed me in distress,” about those potential cuts, said Rep. Russ Morin, D-Wethersfield. He said asking Connecticut’s wealthiest households to pay more is reasonable given the stakes.

The single-largest net tax hike under consideration involves the income tax and what would amount to the fourth increase in this tax since its enactment in 1991.

This one would be centered entirely on wealthy households in two ways:

Sen. John Fonfara, D-Hartford, co-chair of the finance committee, noted that an analysis of state tax burdens completed last December by the Department of Revenue Services showed that households earning less than $48,000 annually pay the greatest share of their income — more than 23 percent — to cover state and local tax obligations. And most of that burden involves local property taxes.

“The lowest end already pays the most,” Fonfara said. “I think perspective is necessary.”

But Sen. L. Scott Frantz of Greenwich, ranking GOP senator on the finance committee, predicted that the scope of the tax hikes would drive businesses and residents out of the state.

“I think a lot of people feel really let down,” Frantz said.

The large deficits projected for the next two fiscal years, $1.3 billion and $1.4 billion, respectively, have been projected for nearly a year now, and the governor and legislature had plenty of time to find better options than major tax hikes, Frantz added. “This will scare the daylights out of anybody thinking of coming to Connecticut.”

The Malloy administration ignored the proposed tax increase on the wealthy and reacted to a minimal impact on the middle-income taxpayer.

The governor, who was the mayor of Stamford for 14 years, traditionally has urged caution when tax hikes on high-income earners, many of whom reside in Fairfield County, are under consideration.

The governor’s 2011 plan to close a mammoth-sized state budget deficit included raising the top income tax rate from, 6.5 to 6.7 percent. But Malloy, who said Connecticut’s top rate must remain competitive with those in neighboring states, also argued in his 2011 budget address that “while I do believe in a progressive income tax, I do not believe that we should punish success, or wealth.”

Malloy was cautious in his statement Wednesday, focusing his comments on how broadening the sales-tax base would affect middle-income households. But the expanded sales tax would be largely offset by reduced sales tax rates and new property tax relief.

The governor “chose to make tough decisions — even if they’re unpopular — so that everyday families and small businesses would not have to pay more day-to-day with new taxes,” the governor’s office wrote in a statement Wednesday. “The tax plan put out today takes a very different approach. Simply put, it asks far too much of Connecticut’s middle class and small businesses.

“While the governor appreciates the work of the Finance Committee and will review its budget in full, he believes strongly that tough choices are needed today in order to ensure a brighter tomorrow for everyday Connecticut families,” the statement continued.

The second major component of the committee’s plan overhauls the second-largest source of revenue in the state budget, the sales tax. 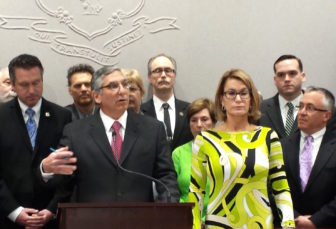 The plan broadens the sales tax base significantly, imposing or increasing the levy on many dozens of new services, including two areas very sensitive to businesses: data processing and accounting services.

The Connecticut Business and Industry Association warned repeatedly this spring that applying the sales tax to business services would weaken the job growth projected for the state this year.

Broadening the sales tax would raise more than $730 million in new revenue over the next two years.

But that would be offset in two ways.

First, the 6.35 percent sales tax rate changes in two stages. On Oct. 1, 2015, the rate as far as consumers are concerned remains the same. But the sales tax would be split into a state rate of 5.85 percent and a municipal rate of 0.5 percent. And on July 1, 2016, the state rate would drop again to 5.35 percent. Combined with the municipal rate, the effective rate charged to consumers would stand at 5.85 percent on July 1.

Secondly, the committee plan would send more than $700 million in sales tax receipts to cities and towns — $294 million in 2015-16 and $409 million in 2016-17. And the legislature would use a controversial accounting maneuver to move those payments outside of the constitutional spending cap.

Some of those funds would be transferred to cities and towns as part of a plan to limit municipal property taxes on motor vehicles. Communities would be barred from levying a property tax rate of more than 29.36 mills. But those that had to lower their property tax rate to comply would receive sales tax receipts to offset that revenue loss. Legislative analysts say this would provide relief to 57 communities with higher tax rates, with the most relief targeted at urban centers.

Some of those sales tax receipts also would be used to bolster an existing state program that reimburses communities for lost revenue tied to properties owned by the state, colleges or hospitals. These properties are exempt from municipal taxation.

Minority Republicans in the legislature cried foul Wednesday, noting that the income tax hikes and most of the sales tax changes had not been discussed at public hearings.

“There is little trust in government and politics these days,” said House Minority Leader Themis Klarides, R-Derby. “Do you blame them?”

Klarides and Fasano sent a letter to top Democrats in the House and Senate urging a public hearing on these proposals.

Businesses also are smarting over the committee plan, which imposes $350 million in new taxes over the biennium by restricting credits and imposing other rule changes.

“I really, honestly think Connecticut is going down the wrong path here,” said Joseph F. Brennan, the president of the Connecticut Business and Industry Association. “This goes so far beyond business.”

“Having a massive tax increase like we’re seeing in this proposal,” Brennan added, “it really says to me we’re not focusing where we need to focus.”

Hospitals also would face a tax hike under the committee plan.

It would raise $321 million in new taxes from hospitals, but also would return those funds to the industry to qualify for more federal Medicaid assistance.

But hospitals are wary and say they have been burned by this approach before.

The state imposed a $350 million-per-year hospital tax in 2011-12 and initially used the proceeds to help make $400 million in payments to hospitals. But over the past three years the tax has remained the same while the annual payments gradually have declined to $96 million.

Keno and other changes

The committee also gave the green light to launch keno in Connecticut bars and restaurants. Keno is a centralized drawing game, whose results are broadcast on video screens in bars, restaurants and stores in the states where it is offered, including New York and Massachusetts. In New York, a drawing is held every four minutes.

The game is crucial to help the state’s lottery system remain economically competitive in the future, according to Connecticut Lottery Corporation officials.

The state would have to negotiate and reach agreement with the tribes that run its two southeastern Connecticut casinos before it could launch keno, which probably wouldn’t begin until December or January. The compact between the state and the tribes gives the latter exclusive rights to offer certain casino games, and both sides have recognized that keno falls under that agreement.

According to nonpartisan analysts, adding the game would bring in $43.6 million over the next two years.

The previously approved tax relief that was canceled or deferred under the finance committee plan includes: